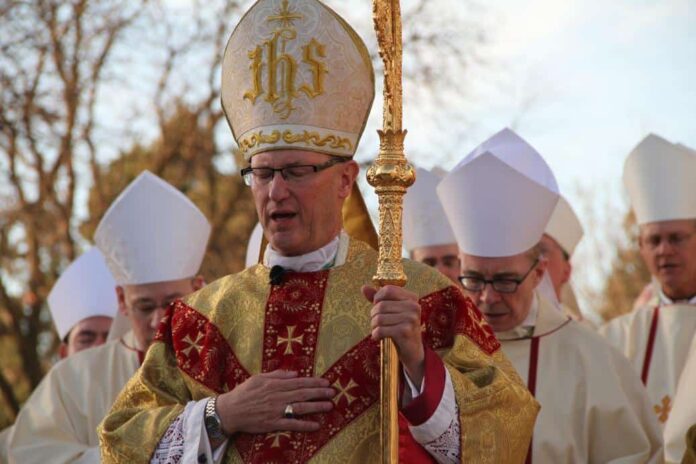 Bishop James Conley announced last week that he is taking a medical leave of absence from his ministry as Bishop of Lincoln, Neb.

“I have been medically diagnosed with depression and anxiety, along with chronic insomnia and debilitating tinnitus, which is a constant ringing of the ears,” Conley wrote in a Dec. 13 letter to Catholics of the Lincoln diocese.

“My doctors have directed me to take a leave of absence for medical and psychological treatment, and to get some much-needed rest. After prayer, and seeking the counsel of my spiritual director, my brother bishops, and my family, I have accepted the medical necessity of a temporary leave of absence,” the bishop added.

Conley wrote that he was sharing information about his health “because I hope, in some small way, to help lift the stigma of mental health issues.”

The bishop explained his own changing perspective on mental health.

“For months, I’ve tried to work through these issues on my own through spiritual direction, counseling, and prayer,” Conley wrote.

“But the truth is that depression and anxiety are real psychological problems, with medical causes, requiring medical treatment. For me, those problems have been coupled with physical symptoms,” the bishop added.

Conley wrote that he “will be at a diocesan retreat facility in the Diocese of Phoenix, thanks to the kind invitation of Bishop Thomas Olmsted, while I undergo the best psychological and medical treatment available to me.”

In a Dec. 13 press release, the Diocese of Lincoln said that Archbishop George Lucas of Omaha will be the temporary apostolic administrator of the diocese during Conley’s absence.

“I offer my full support to Bishop Conley as he steps away from the Diocese of Lincoln to focus on his personal health and well-being. As a brother bishop, I know the demands of being a diocesan pastor; as a friend, I want Bishop Conley to avail himself of the time and the setting that will help him to return to full health and strength. I look forward to welcoming him back when he is ready to return,” Lucas said Dec. 13.

The “difficult time” for the diocese to which Conley referred began in July 2018.

In that month, reports emerged that Msgr. Leonard Kalin, who served as vocations director in the Diocese of Lincoln from 1970 until the late 1990s, had engaged in inappropriate sexual behavior with seminarians and prospective seminarians.

Kalin, now deceased, reportedly made sexual advances toward seminarians, asked them to help him shower, and would invite seminarians on trips to Las Vegas or for late-night drinks.

Some reports accused Conley’s predecessors of failing to take seriously allegations against Kalin, although an August 2018 statement from the diocese said it had “addressed these allegations of misconduct directly with Msgr. Kalin during his time in priestly ministry.”

After the Kalin report emerged, Conley ordered reviews of diocesan policies regarding clerical conduct and accountability, made personnel changes in the diocesan curia, and help listening sessions in the diocese about clerical abuse or misconduct.

Several Lincoln priests were subsequently removed from ministry, and Conley apologized for the way he had handled a 2017 report that a priest had “developed an emotionally inappropriate, non-sexual relationship with a 19-year-old male which involved alcohol.”

The priest was removed from ministry and sent to a treatment center in Houston before allowing him to return to ministry.

Conley said that he attempted to act with integrity, telling the parishioners that the priest had gone away for health reasons. But while he said he did not cover up the situation or oblige anyone to keep silent about it, he said he regrets failing to act with more transparency.

“Even though we were not legally obligated to report the incident, it would have been the prudent thing to do. Because the young man had reached the age of majority, we did not tell his parents about the incident,” Conley said last August.

In September 2018, Nebraska’s attorney general initiated an investigation into whether the state’s three dioceses had mishandled or covered-up allegations of abuse or misconduct. A report on that investigation has not yet been issued.

The diocesan press release did not cover what role Lucas will play in addressing those matters, though Conley’s letter said he had worked with the archbishop “for a smooth transition, with the full support of my senior staff.”

Conley, 64, became Lincoln’s bishop in November 2012. He had been an auxiliary bishop in the Archdiocese of Denver since 2008 and had worked in the Vatican’s Congregation for Bishops from 1996 until 2006.

The bishop’s announcement comes days after a report from the Associated Press chronicled the mental health challenges experienced by priests, and noted the propensity of ministry leaders toward depression and other difficulties.

Conley wrote that he is hopeful about his medical leave of absence.

“Jesus Christ is the Divine Physician, who offers us the grace of healing. I entrust myself to the healing power of Christ, and the intercession of the Blessed Virgin Mary,” the bishop wrote.

“I am grateful to be your bishop, and I love the Diocese of Lincoln. It will be difficult to be away. Please pray for me, as I pray for you.”