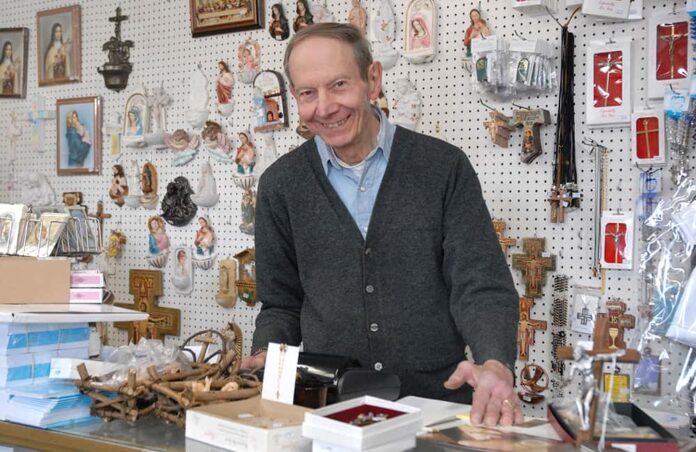 He was a kind, generous, holy soul beloved by those who knew him as family, or friend, or as owner of John Erger Church Goods in northwest Denver, where for six decades he sold all things Catholic.

“He just gave to everyone,” niece Julie Halliwell told the Denver Catholic about Erger’s generosity to children and adult visitors to his store, and his gifts to parishes, church groups and charitable causes.

“He was an angel to everyone,” she said. “He had thousands of little gift cards from King Soopers and [other places] that he would give to the homeless. The poor would come in [to the store] all the time.”

“Once Uncle John got it in his head you liked something, you would be inundated with it, whether pistachios, or oranges, or Oreos, or whiskey,” he said, drawing laughter.

Among the congregation filling the church for the Mass were a dozen priests.

“That there were so many priests there is testament to the fact that John bailed us out— a lot,” said Father Marty Lally, Holy Family pastor and celebrant of the Mass. “For example, on Holy Saturday morning we noticed the paschal candle was broken and we had to get another one immediately … or when we’d run out of hosts … John would scramble to help us right away.”

Erger was also generous in other ways, Leberer said, noting he donated hundreds of gallons of blood and plasma, and for years took Communion weekly to the homebound and sick.

“He loved hosting people at his house and making food for them. He was a great cook,” added Leberer. “One of the ironies: John ate in extreme moderation—he could take up to five days to consume a single coconut doughnut—but if you came to John’s house, even unannounced, you would be over-served.”

“He loved being related by blood to a confirmed saint, Mother Marianne Cope,” Leberer said. “John was as humble as they come, but when she was declared a saint by Pope Benedict in 2012 … from that point on he always wore several buttons with [her] image.”

Born in Denver on July 7, 1932, to John and Agnes Erger, he was their youngest child and only son. (His siblings, Sister Catherine Erger, S.C., and Rosemary Leberer survive him.)

One day Erger asked the owners if they would consider opening a store in northwest Denver, which he would gladly manage, Leberer said. He was quickly rebuffed.
“It would never work,” Leberer said Erger was told, “because northwest Denver was one the ‘crummiest’ parts of town.”

Undeterred, in 1957 Erger opened his own shop on West 29th Avenue and Tennyson Street in northwest Denver. In the mid-1980s, he moved the successful business to nearby 26th Avenue and Sheridan Boulevard.

Last year, frail and bent from a degenerative back disease and suffering from poor circulation, Erger sold the business to longtime friends and it was moved to 26th Avenue and Kipling Street in Lakewood. Although Erger had “retired,” the new owners kept a reclining chair in the backroom for Erger’s use whenever he pleased.

A simple reception of coffee and donuts followed the early morning funeral Mass, fulfilling directives Erger had left. There, Leberer offered a toast nominating Erger for canonization as “the patron saint of northwest Denver.”
“When he gets his tombstone,” Halliwell asserted, ”that’s what’s going on it.”