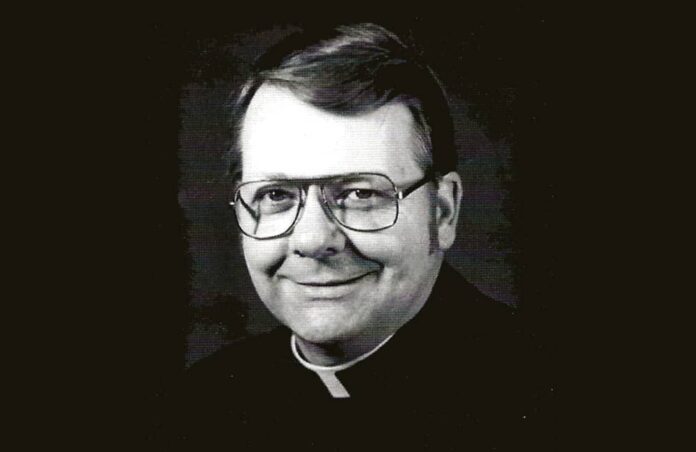 Benedictine Father Michael Murray, who was the last surviving monk of Holy Cross Abbey in Cañon City, died Dec. 14. He was 83. He had been a monk 63 years and a priest 38 years.

“He was a wonderful man, extremely talented in so many ways,” said the priest-monk’s brother John Murray of Lakewood, who shared the same birthday as his brother.

“He loved to tell the story that on his seventh birthday all he really wanted was a fire truck but what he got was a little brother,” John Murray recalled with a chuckle.

Born Donald James Murray on Sept. 20, 1936 to Tom and Carlotta Murray in Denver, he was one of six children. After graduating from Blessed Sacrament School in Denver, he became a boarder at Holy Cross Abbey High School in Cañon City, graduating in 1954.

“He had fallen in love with the Benedictine way of life and in January 1955 he entered the monastery,” John Murray said.

Taking the name Brother Michael, he professed his monastic vows in August 1956. His early years as a monk were spent in construction and food service. When the main monastery building was sinking in the late 1950s, John Murray said his brother designed a system to stabilize the structure.

“It worked, saving the community hundreds of thousands of dollars,” John Murray said.

In 1964, Brother Michael was named business manager of the monastery and the abbey school. Among his enterprises was launching Abbey Bread in conjunction with Safeway grocery stores and the Pillsbury Company.

Active in the business community, Brother Michael was a member of the Cañon City Chamber of Commerce for several years and was elected president of the chamber in 1973. He was the first Benedictine monk to hold such a post in the United States, reported the Cañon City Daily Record.

“He would have been a very good businessman,” John Murray said. “He was a businessman at heart.”

In 1977, Brother Michael realized a longtime desire when he entered Pope St. John XXIII Seminary in Weston, Mass. He was ordained a priest in June 1981, the 25th year of his monastic profession.

His first priestly assignment was as assistant pastor at Sacred Heart of Jesus Parish in Boulder, where he served from 1981-1985. He then served 16 years as pastor of St. Benedict Parish in Florence, where he implemented many innovative projects and instituted tithing.

“He was a giving priest,” said St. Benedict’s parishioner Debra Trujillo, who with her husband Bob remained close friends with their former pastor who they said was known throughout the wider community for generous donations of food and clothing, and for leaving the parish debt-free and with a large amount in reserve when he retired as pastor.

A gifted artist, Father Michael made metal sculptures ranging from wall crosses — which were in high demand at parish fundraising events — to oversized stand-alone abstract and religious pieces, some of which were commissioned by other churches. He also painted and did woodworking, including making beautiful caskets.

“He built wood caskets for the monks,” John Murray said. “He was always going to make one for himself, but he never got around to it.”

Father Michael’s artwork can be found in churches in southern Colorado and on the Holy Cross Abbey campus, his brother said.

“He was a very special man,” John Murray said. “He was comfortable in the business world, in the artistic world, and he had a culinary certificate.”

Over the years, Father Michael earned a master’s degree in business administration and a doctorate in ministry and pastoral counseling. During his time as pastor at St. Benedict’s, Father Michael also became administrator of Holy Cross Abbey. He continued in that role as the abbey underwent the process of dissolving its monastic program, which took three years starting in 2002 and culminated with the sale of the campus in 2007.

In recent years, Father Michael’s health began to fail but he continued pastoral and sacramental ministry in Cañon City, primarily at the assisted-living center where he eventually became a resident. While there, he continued to celebrate Mass for the residents.

“Father Michael cared very much about the abbey,” Father Maurice said. “It had literally been a part of his life since he went there to high school right before he joined the monastery.

“His whole life was focused on the abbey … and to parish ministry, to the spiritual care he provided at the care center and even as a resident there. Up until his last days he was ministering to people. … He was just a very caring person.”

“He was the last monk standing,” John Murray said. “There was one spot left on the property. That’s where he’s buried.”