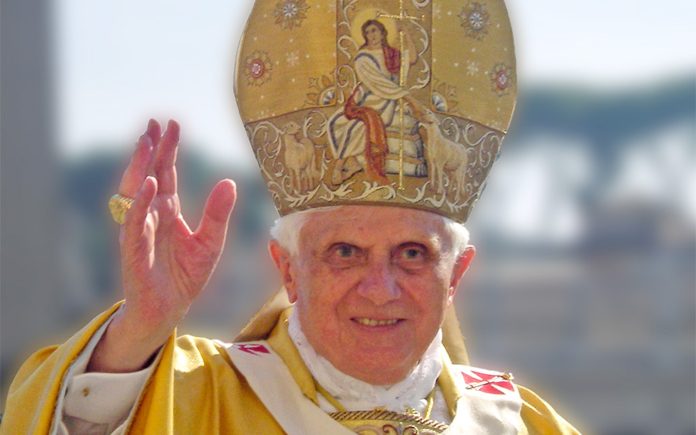 I first met Joseph Ratzinger when I was 15 years old. No, not in person, but I was given The Ratzinger Report by my pastor, Father Daniel Mahoney. He knew I was looking for answers. I had already devoured the Bible, the Catechism and several books on Church history, and I was learning more about the Byzantine and Tridentine liturgies. I was confused about what I saw in the Church, and how it didn’t line up with what I was learning. Father Mahoney thought Ratzinger could help sort it out. He was right.

Even as a teenager, Ratzinger gave me assurance with his liturgical vision and rootedness in doctrine. As The Ratzinger Report related, the Church was going through a crisis following the Second Vatican Council, and despite the attempt by many to break with the past, we could still remain faithful to the traditions guarded faithfully through the centuries.

He noted that “the results that followed the Council seem cruelly opposed to the expectations of all. … What the Popes and the Council Fathers were expecting was a new Catholic unity, and instead one has encountered a division which — to use the words of Paul VI — seems to have passed over from self-criticism to self-destruction.” Ratzinger inspired me to be part of the fight to preserve the Church’s true identity.

As I pursued graduate studies in theology, I gravitated immediately toward St. Augustine and St. Thomas Aquinas, but I was also looking for a more contemporary model. At this point I hadn’t read any of Ratzinger’s theology and my advisor, Dr. Don Briel, pointed me again to him. Just as Ratzinger helped me to situate the life of the Church, now he helped me, especially through Introduction to Christianity, to navigate theology — looking to Scripture and the Fathers, speaking from this tradition to contemporary concerns, and rooting my work clearly in the faith of the Church.

Ratzinger is the gift that keeps on giving, though by the time I got my first job, he had become Pope Benedict XVI. I was hired by the Augustine Institute to teach catechesis and, though I was a director of religious education at a couple of parishes, I had not gotten deep into catechetical theory. Ratzinger once again emerged as the clearest voice, introducing and explaining the Catechism and calling catechesis to a renewal of faith. He recognized, in a famous speech that was published as Handing on the Faith in an Age of Disbelief, that catechesis had become anthropocentric — more concerned about human experience than a transforming encounter with God in faith. His work with Pope St. John Paul II to provide the Church with new doctrinal clarity through the Catechism served as turning point for the renewal of catechesis.

What could Ratzinger not do? He had guided me on the state of the Church and liturgy, oriented my theological studies and directed my catechetical teaching. His pontificate marked a critical moment for those committed to genuine Catholic reform. He continued the trajectory of Pope St. John Paul II and I think history will look at their pontificates as closely intertwined, communicating clearly the vision of the Second Vatican Council to share the truth of the faith in love to the modern world. They both inspired many vocations and conversions, and continue to serve as model teachers and evangelists.

As pope, Benedict accomplished much, but he was pushed beyond his strength. He provided a strong moral and spiritual witness that caught many people’s attention, and he became one of the Church’s greatest teaching popes. Internal governance was not his strength and it created unmanageable problems for him in the Vatican. Nonetheless, looking back, he established important norms for financial reform and to address the sex abuse crisis (though they face an uncertain future). Clearly his decision to resign came from deep faith and trust in God, though it created anguish to those of us who looked to him as spiritual and theological father.

For me, he modeled a life dedicated to Christ and the Church in loving service. He exemplified the need to share the truth in love and with boldness. He inspired me and so many others to become, as his motto states, “cooperators of the truth.” As we look to the future, the legacy of Joseph Ratzinger/Benedict XVI provides us with a great treasury to continue the task of renewal. For those who have been touched by his profundity and devotion, we have a life’s worth of work — continuing his legacy, and advancing it as we may, for the coming generations.

This column was originally published by the National Catholic Register on Jan. 3, 2023.

Share
Facebook
Twitter
Linkedin
Pinterest
Email
Print
Previous articleLISTEN: Bishop Rodriguez reflects on the life and legacy of Pope Benedict XVI on 850 KOA
Next articleUPDATE: Archdiocese of Denver works with city on use of Mullen Home