Before the 2020 Presidentiad begins in earnest…. 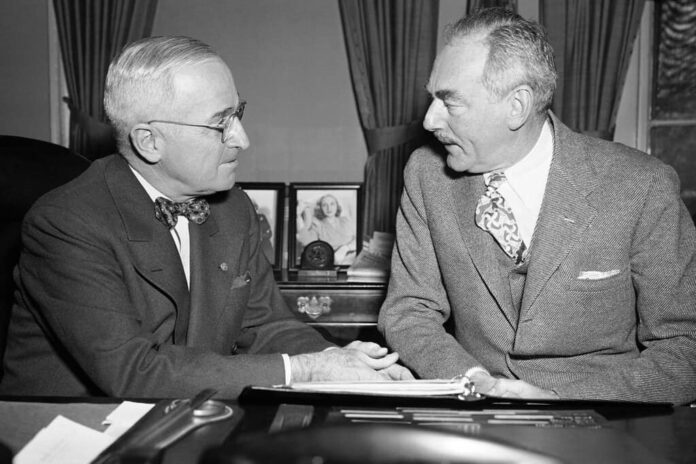 Americans not obsessed with politics — that is, most Americans — will start  paying serious attention to the 2020 presidential race after the February 3 Iowa caucuses and the February 11 New Hampshire primary — or perhaps after the March 3 Super Tuesday primaries winnow the Democratic field. So before the partisan din rises to ear-shattering volume, there’s some time left for Americans who aren’t entombed in ideological silos to ponder the qualities they would like to see in a president of the United States. I recently came across a description of such qualities.

Some historians regard Dean Acheson, who held the office under President Harry Truman, as the greatest secretary of state in American history. Be that as it may — and partisans of John Quincy Adams, William Seward, and John Hay would certainly enter caveats — I’m prepared to argue that Acheson’s 1969 memoir, Present at the Creation: My Years at the State Department, is the greatest American reminiscence of the author’s public service since the Personal Memoirs of Ulysses S. Grant were first published in two volumes in 1885-86. Grant wrote beautiful, clean English prose. For literary elegance and continual readability, though, I’d give Acheson the edge, not least because of his delightful habit of dropping a laugh-out-loud zinger into his narrative on occasion.

While seeking distraction from the Baltimore Ravens’ season-ending implosion a few weeks back, I pulled my dog-eared copy of Present at the Creation off the shelf to check a fact. And while rambling through the book, I found Acheson’s  description of distinguished, history-changing political leadership:  “great qualities of heart and brain, indomitable courage, energy, magnanimity, and good sense” wedded to “supreme art and deliberate policy.” These latter, Acheson insisted, “fused the other elements into the leadership that alone can call forth from a free people what cannot be commanded” — which is to do what lesser, more timid spirits imagine cannot be done.

Effective leadership at the highest political level thus demands not only wit and wisdom but dramatic craft that rises above demagogy: the ability to weld style to action in a way that summons forth the best in a democratic nation.

It is often said, today, that we live in unprecedented times, such that the old templates, liberal or conservative, no longer apply. This may be true. But unprecedented times are not unprecedented. Not so long ago, American statesman like Dean Acheson — and Harry Truman, George Marshall, Arthur Vandenberg, and Dwight D. Eisenhower — faced an unprecedented situation of their own. Europe was in ruins. Communist power had consumed China and was being ruthlessly imposed in central and eastern Europe. Great Britain was flat broke and incapable of exercising a major role in world affairs. So the leadership of what then called itself, unapologetically, the “free world” was thrust on the United States.

The bipartisan grand strategy that was developed to meet that challenge eventually saw the country, and the West, through the Cold War. In his memoir, Acheson described that strategic vision (which remains salient today) with characteristic elegance — “to safeguard the highest interest of our nation, which was to maintain as spacious an environment as possible in which free states might exist and flourish” — and outlined the method he and others devised to achieve that end: “common action with like-minded states to secure and enrich [that] environment and to protect one another from predators through mutual aid and joint effort.”

Is such creative political imagination possible today? I would like to think so. But it will only to emerge if the American people have the character to demand it: if “we the people” insist that those who would lead us stop running as identity-politics tropes or ideological memes, stop playing “gotcha” games with other candidates, and stop treating us as if we’re primarily interested in emotional venting rather than leadership in the service of great causes.

At the end of his memoir, Dean Acheson bore witness to what most impressed him about President Truman: “Free of the greatest vice in a leader, his ego never came between him and his job. He saw his job and its needs without distortion from that astigmatism.” Do we, the people, want such leaders today?

A sobering question, to be sure. Christian realism demands that it be asked. Christian hope looks forward to a positive answer, which can only come from a citizenry that has escaped the silos and recommitted itself to the common good.