His Church. Our Experience.
Subscribe
HomeLocalWhen did you become you?
Local

When did you become you? 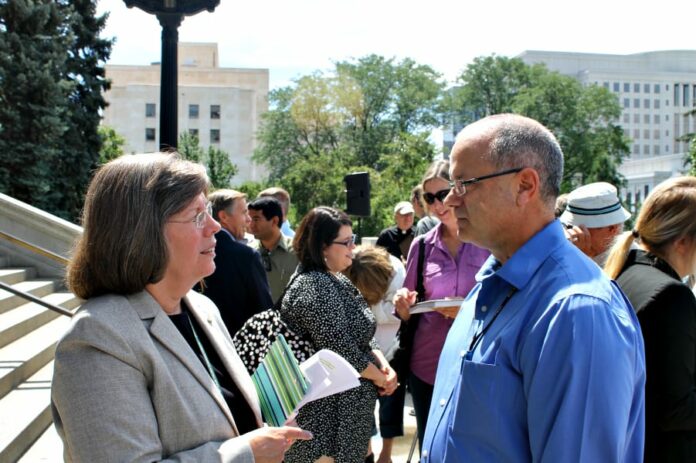 On Aug. 26 pro-lifers gathered at the Colorado Capitol in support of U.S. Senate Bill 1670, the Pain Capable Unborn Child Protection Act, which aims to stop late-term abortions and protect the health of women. The rally was sponsored by Students for Life of America. The United States is one of just seven nations that allow abortion past 20 weeks (five months) of pregnancy. Among the speakers was Lynn Grandon, executive director of Lighthouse Women’s Center and program director for Respect Life Resources of Catholic Charities of the Denver Archdiocese. Her comments are below. Listen to Grandon’s talk here:  http://ow.ly/BfRYf.

Objective scientific fact affirms that, at fertilization, when a brand new DNA strand is established, it is the blueprint for a genetically unique human being. The instructions are present for all that that person ever will become. And that is how each of you, and each of us standing here … this afternoon, began our life here.

And here’s something beautiful that I want to share with you. God tells us in holy Scripture that even before he formed us in our mother’s womb, he knew us. He knew us. That means he was even thinking about you, and what you were going to do, before you were even created.

I want to let you know, that at centers like this, these women’s centers — and ours is located right across the street from the second largest Planned Parenthood in the whole United States of America—we are tired of people saying to these dear women, “It’s not a baby until it’s born.” I politely say to those people: What else could the offspring of two human beings be: a giraffe, a tadpole? I mean, honestly, we are so intricately designed.

I’d love to share with you that your circulatory system was so intricate that within 18 to 21 days after you were created; your little heart had already begun to beat. That is before some women even realize that they’re pregnant. Do you know I’ve had poor little couples as young as eighth grade that got pregnant say: “Well, the baby’s heart is already beating?” I say, “Yes, it’s a scientific fact.” And they would quietly say, “Well, I don’t want to take the life of something that’s heart is already beating.”

I mean, these are wonderful things. If we share truths with people, they can make right decisions. Did you know, when you were only 8 weeks old inside your mother — that’s just about the size of the top of my thumb — that all of your internal organs were present? They just had to get bigger. I mean, that’s astounding. We have had young women come into our centers and say, “Well, wait a minute, you’re saying that my baby is that big already? I was just across the street last year and they told me there was nothing in there.”

Come on people. We just can share the truth. Which is absolutely wonderful for me to share with you because we serve the God who not only created the entire universe, he also is the God of the microscopic world. That within just a few weeks after you were 8 weeks old, the FBI would be able to tell you apart from any person on the planet. Because your fingerprints were being finished up while you were still in the womb. It’s amazing.

So don’t be afraid to share real truth. Use common sense. Use honest science. A baby inside the mother is distinct from their mother. Do not let women say to you, “This is my body, I’ll do with what I want.” That baby may have an entirely different blood type. So how can it be that body? What if it’s a little boy? How can it be her body, inside a female body, if every part and every bit of that little body says this is a boy.

There [are] so many arguments out there. Dependency, we can refute that. The arguments that say we can kill babies at one stage, and not another, I contest are arbitrary, no basis in biology, philosophy or morality.

What is the phrase they always use to sell abortion: The baby must be wanted? I stand before you today and say, with a generous heart, there is not a baby born anywhere that is unwanted. Somebody wants that baby. Somebody wants it. There’s over 2 million couples right here in America that are waiting for an [adoption] and that baby does not have to be perfect. They would love to give their love to that baby.

It’s worth thinking about it. Our individual biological systems begin at conception and end at the end of our life. Our humanity does not depend upon our size, our stage of development or our place of residence. One of the women here, I’d like affirm what she said, because children in the womb can be viewed, monitored, receive blood transfusions and have in-utero surgeries to correct defects. It’s illogical to say that they’re not part of the human family.

Down at this end of Colfax, go that way, at Children’s Hospital, they’re doing in-utero surgery. Go the other way to Boulder—same size, right—they’re taking their lives. I want to make another important comment about Colorado, and I’m happy to be living here now. We protect eagles, don’t we, from extinction? We also have laws regarding their eggs. Why? What’s inside that egg? An embryonic eagle.

Father Tad [Pacholczyk] from National Catholic Bioethics Center reminds us: “When we begin to talk about our embryonic origins, we can’t go through mental gymnastics trying to convince ourselves that we were never embryos.”

I say, all of you: Be brave, stand up for the value, worth and dignity of every single human life. And I don’t know how many of you [here] read the Bible. But I will say to you right now, I read the back of the book. And we win.