His Church. Our Experience.
Subscribe
HomeLocalBecause of You: A foundation for mission
Local

Because of You: A foundation for mission 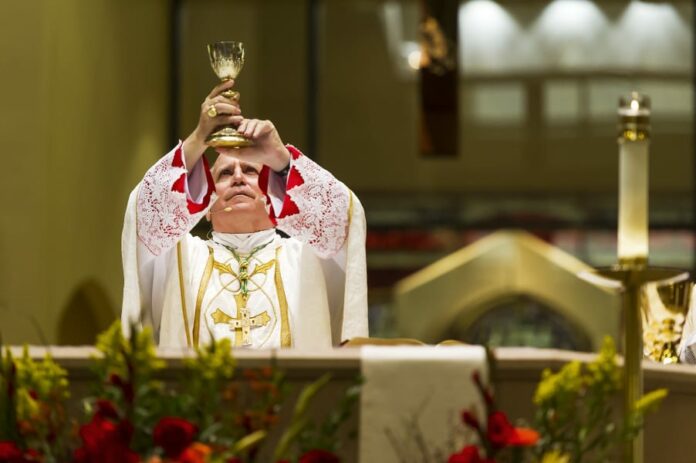 This is the first part of a series of articles showcasing the many ways the annual Archbishop’s Catholic Appeal enables and furthers the divinely-instated mission of the Archdiocese of Denver.

In this Year of Mercy, the time is approaching when Archbishop Samuel J. Aquila appears on TV and projector screens in parishes across Northern Colorado and introduces the annual Archbishop’s Catholic Appeal (ACA).

The theme for this year’s ACA is “Because of You,” a simple way of saying that none of the ministry and work carried out each year by the Archdiocese of Denver would be possible without the faithful of Northern Colorado and those who generously give to the ACA.

“God has put in our hearts a desire to perform spiritual and corporal works of mercy. When we do not have opportunities to do them, we can connect to the works others are doing by making a donation,” said Father Randy Dollins, vicar general of the archdiocese. “‘Because of you’ reminds us that even though we might not be the person directly performing the work, it would not be possible were it not for the donations that support the existence of the ministry in the first place.”

There are a lot of moving parts in the Archdiocese of Denver that allow for it do to the work it does on a daily basis. Parishes play an integral role in the mission of the archdiocese, and are a part of a bigger structural system in place that lays the foundation for the mission to happen, one that wouldn’t exist without the ACA.

The offices that make up the Pastoral Center are referred to as the Archbishop’s Curia, and their mission is as such: to assist the archbishop in the administration of the archdiocese, communicate his vision, support his pastors and personnel, and bear witness to Christ and the Church’s teachings through a lived example.

Father Dollins is the moderator of the Curia, and he said that the work done by the offices Pastoral Center is the unseen part of ministry.

“The work that’s being done by the Pastoral Center supported by the ACA forms a foundation underneath the building where all the ministry can happen,” Father Dollins said. “The ministry doesn’t just happen without all of these other support structures.”

Father Dollins also said that the Pastoral Center and all of its teams and offices are here to support all 109 parishes in the diocese.

“Parishes have a much bigger staff available to them than they do at their own parishes,” he said.

The ways in which the Curia supports parishes are many, Father Dollins said. For example, the Human Resources department at the Pastoral Center helps parishes with their own human resources operations, training business managers and creating hiring and screening procedures for all parishes to use.

With the recognition that parish communications are integral to the churches health and mission, the Office of Communications at the Curia launched the Denver Parish Connect initiative. Today, 73 separate parishes or archdiocesan ministries have taken advantage of one or more of these services. The Office of Communications offers free digital tools, on-site training to parishes, points parishes to free resources, and helps parish staff adopt best practices from others who may be very effective in a particular area.

To introduce this initiative, two free training sessions were held for staff from 41 different parishes at the Saint John Paul II Center. A highlight of the Denver Parish Connect initiative has been the widespread adoption of Flocknote which allows pastors and parish staff the ability to text or send digital newsletters to their communities. Additionally, other parishes have websites or newsletters for the first time.

Many parishes have reported having clear and reliable channels for the first time. “We’re making people feel like they’re truly welcome because we’re meeting people where they’re at by showing up on a text message or in their email,” said Sarah Johnson, communication coordinator for St. Vincent and St. Mary of the Crown parishes in Carbondale. “It’s a great tool in our toolbox to allow us to better build community and make people feel like they are included and invited to be a part of our parish community.”

“These least brothers of mine”

Another manner in which the Curia supports parishes is through its various ministries. One of the most crucial of these is the Office of Hispanic Ministries and Centro San Juan Diego, headed by executive director Luis Alvarez. Latinos account for more than half of those in the pews in the archdiocese, and the goal of these two entities is to integrate the Latino population more fully into not only the life of the Church, but also society as a whole.

“‘Because of you’ reminds us that even though we might not be the person directly performing the work, it would not be possible were it not for the donations that support the existence of the ministry in the first place.”

Alvarez cites Matthew 25:40 as the basis for his office’s ministry, in which Jesus said, “Whatever you did for one of these least brothers of mine, you did for me.”

“We are serving a portion of the population who, in many senses, qualifies as the ‘the least’ because they’re strangers in a strange land,” Alvarez said. “The Office of Hispanic Ministries and Centro San Juan Diego help the archbishop live out his mission for this portion of his flock.”

Centro San Juan Diego is home to many classes, courses and ministries for Latinos. They offer everything from accredited college degrees to faith formation classes to family ministry certifications. Last year, they also helped to make all Natural Family Planning methods available in Spanish for parishes and marriage preparation instructors to use.

Though Centro San Juan Diego is where a lot of the ministries and classes happen, it doesn’t all happen there, Alvarez said. The Office of Hispanic Ministries makes a point to go to parishes and offer training there, and Alvarez often meets with pastors and collaborates with them to address any needs they may have when it comes to their own Hispanic ministries.

“The people contributing to the ACA are helping to reach out to these people who otherwise might not be tended to,” Alvarez said.

Donate to the Archbishop’s Catholic Appeal

Visit http://archden.org/almsgiving/ to donate to the ACA.