A beautiful origin: FOCUS initiative seeks to evangelize through beauty 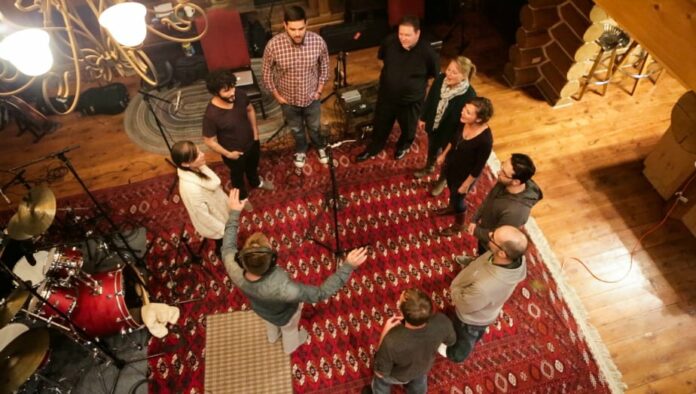 A new initiative within the Fellowship of Catholic University Students is bringing beauty to the forefront of evangelization.

Dubbed simply as “A Beauty Initiative within FOCUS,” this initiative seeks to encourage the collective talents of FOCUS missionaries, especially those who are artists, and utilize them as a means of evangelization. Serving as the starting point for the initiative is Origin, an album of beautiful worship music performed by the FOCUS worship team.

The idea for Origin and the beauty initiative as a whole was planted at last year’s SEEK conference in Nashville. Shaun Garrison and Leah Sedlacek are among a group of musicians that lead worship for the conference each year, but they said last year in particular was especially powerful. They were a part of a great line up of musicians, not only in terms of musical ability, but also in prayerfulness and in the ability to trust and rely on one another.

Sedlacek recalled taking out her in-ear monitors during their performance of “Be Thou My Vision” and being taken aback by the unity of worshipping voices. It was so beautiful, she said, that she was moved to tears.

“I just started crying. It was so beautiful, this intimacy of singing to Our Lord together,” she said. “I think there I felt the power of the Holy Spirit bonding the band together that was then helping people to be bonded together as the body of Christ to worship.”

“The Holy Spirit was just moving through the music in a way that none of us had experienced,” Garrison said. “All of us were amazed in that moment to be a part of it, but also saddened to think that the reality is we’re only together for seven days a year.”

Garrison and Sedlacek felt as though the Lord was stirring something in them to do more. They drafted a proposal for the beauty initiative, the first step of which was organizing a retreat with the FOCUS worship team and creating an album of music.

Garrison and Sedlacek, along with the rest of the worship team and a few kindhearted volunteers, retreated to a cabin in Buena Vista for five days and held the recording sessions for what would become Origin. The album consists of reinterpretations of old hymns, some modern worship songs as well as a couple of original songs written by some of the musicians involved.

Beauty is something that washes over a person and creeps into the cracks that need God’s presence. It’s a very soft way of evangelization, which then brings [people] to a point where they can open their heart and hear the truth.”

The late-night recording sessions and intense creative output made for an exhausting experience, they said, but one that was unforgettable. All of the musicians felt as though it was a dream come true, being holed up in a cabin for five days and creating music together, and the higher purpose of the project motivated and led them to create something special.

“It was for the Lord, it was for something greater, and I think that was an intangible thing that was present,” Sedlacek said.

Garrison and Sedlacek explained that the ultimate goal for Origin and everything else that falls within this beauty initiative in the future is two-fold: to reach people using beauty as a means of evangelization, and also to encourage other artists to awaken their unique gifts and talents and discover how they fit within the context of the Catholic Church.

“Evangelization is not a method; it’s not something you do. It’s who you are,” Garrison said. “Every single person has a unique calling. The main goal of any of this is not music, it’s to become saints. Music just happens to be the language with which we’re speaking of God’s goodness.”

Though it began with an album of worship music, the beauty initiative within FOCUS is not limited solely to musicians; it’s for any person who seeks to reach people and change hearts by means of beautiful things.

“You can’t help but be moved by beautiful things. They can make you pause and bring you into those deeper questions,” Sedlacek said. “Beauty is something that washes over a person and creeps into the cracks that need God’s presence. It’s a very soft way of evangelization, which then brings [people] to a point where they can open their heart and hear the truth.”

Origin is available for purchase digitally on iTunes, Amazon or Bandcamp, or on CD at shopfocus.org

Watch a video about how Origin came to be: http://focus.org/origin

To learn more about the mission of FOCUS, visit http://focus.org