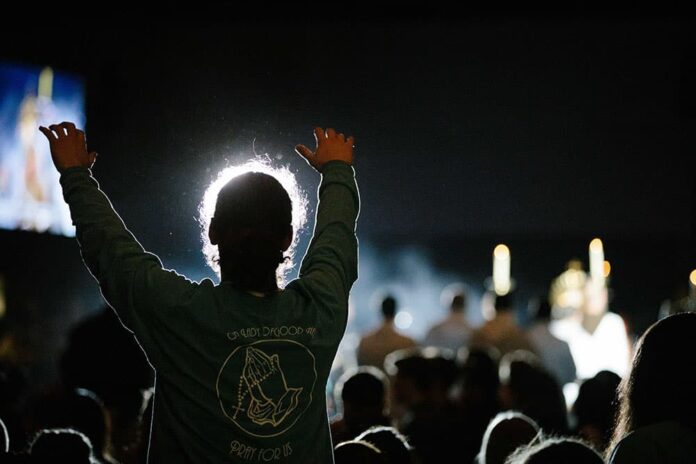 Nearly three years have gone by without the thrill and rejuvenation of an in-person SEEK conference. SEEK, an annual event hosted by FOCUS, always means entering a new year with Catholics who also want to get to the heart of the Gospel, renew their love for Jesus Christ and his Church and be sent back out into the world.

At Our Lady of the Valley Catholic Church, a parish in Northern Colorado, our FOCUS parish missionary and I hosted a remote SEEK22 event in our parish hall because we knew from past years how effective SEEK is to transform souls. I also knew this on a personal level because when I attended my first FOCUS conference in 2010, I found the space to ask questions about the faith and the opportunity to reencounter Christ and his Church. It was a turning point in my life to face the reality and beauty of the Eucharist, and it has been a turning point that I have seen first-hand in college students and parishioners alike.

When we put on a weekend version of SEEK22, I had no idea how fruitful it would be for our parishioners by mostly live-streaming the talks. The whole parish got on board with SEEK22: the Knights of Columbus cooked all the meals, babysitters cared for children during the keynotes, our priests celebrated the sacraments, our youth minister coordinated middle schoolers and high schoolers to take part, and our staff and young adults helped make the space look great.

We ended up having about 250 people join us for the weekend. I heard a man in his 80s say, “I am just realizing how much God loves me.” A middle schooler said his life was changed forever when Christ in the monstrance passed in front of him during a Eucharistic procession. A newly engaged couple who had just moved to the area not only found community, but one of them was not Catholic and decided that weekend to enter the Catholic Church. It was the first time she saw Catholicism not as a single event for an hour on Sunday but rather as a life to be lived.

With so many positive experiences from SEEK22, we made the decision to not only host a SEEK23 event at our parish again this year, but also encourage a group to go to St. Louis to attend the event in person. Even with the beautiful fruit of local efforts bringing SEEK into homes and parishes across the world, there really is nothing that can replace attending it in person.

In a time where we keep hearing of “the end,” SEEK is a chance to see for yourself that the Church is very much alive. You can see it in a room filled with tens of thousands of people giving five days to Jesus to do with them as he wishes. You can see it in a sea of clergy, including many bishops, processing in for Mass. You can see it in a room full of priests hearing confessions into the night with a line that goes on for nearly a mile. There are many things that we can recreate in a parish event about SEEK that make it an effective tool for evangelization — but nothing compares to the sheer number of Catholics and Christ-seekers all in one place, all seeking the same thing.

For many of us here in the Archdiocese of Denver, we can fondly remember when Pope St. John Paul II visited the Mile High City. At SEEK23, we have an opportunity to travel to St. Louis, the site of John Paul II’s final U.S. visit. We can participate in Mass in the very same stadium where John Paul II celebrated the Mass — on the very same altar he used. If this saintly pope lit such a fire in our archdiocese 30 years ago, imagine what more can happen if we journey this January to answer the call once again to the New Evangelization, which John Paul II himself exhorted us to carry out. The New Evangelization is still alive today, and we don’t have to go far to be renewed in it.

See you at SEEK23 in St. Louis this January 2 – 6! For more details and to register, visit seek.focus.org.

Kelsey Ludvik is the Director of Events and Ministries at Our Lady of the Valley Catholic Church in Windsor, CO. She became involved with FOCUS through FOCUS Greek at the University of Nebraska-Lincoln where she obtained a bachelor’s degree in Marketing in 2012. She then went on to be an on-campus missionary with FOCUS for five years at Missouri State University, the University of Missouri-Kansas City, and the University of Tennessee. Following her time on campus, Kelsey moved to Denver in 2017 to work at the FOCUS headquarters as a Sr. Communications Specialist for FOCUS Alumni until last November when she accepted her current job.