His Church. Our Experience.
Subscribe
HomeLocalBack to our (green) roots
Local

Back to our (green) roots 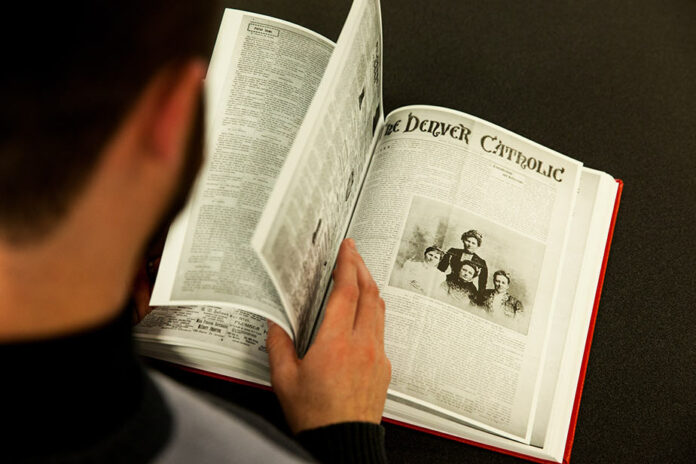 The Denver Catholic is marking 117 years of serving northern Colorado this week by publishing our original masthead, just as it was originally15 published on the first edition of The Denver Catholic, March 17, 1900, and inviting its readers to look back through its rich history.

Smith, who eventually became a priest, and then a monsignor, not only increased circulation and revenues within a year, but went on to found the National Catholic Register and the Register Systems of Newspapers that published some 35 diocesan newspapers and the national edition, boasting a combined weekly circulation of 850,000.

And the rest, as they say, is history … with a robust archive to match.

The new format gives readers the opportunity to browse the archives by date, as well as the ability to see thumbnails of each and every edition of the Denver Catholic available.

New scans, which at the present are only complete through 1920, mean that the digital archives are easier to read, and easier to search. Advanced search options, such as the ability to search by keywords, and to prioritize searches according to relevance or date, are also available.

History buffs also have a chance to deep dive into the archives of not only the Denver Catholic, but also the National Catholic Register (only 1945-57), The Colorado Catholic (1884-1899) and The Southern Catholic Register. The complete archives of El Pueblo Católico, our Spanish-language newspaper, which turns 20 this year, is also available.

Also available is a small collection of donated high schools newspapers from our closed high schools, as well as some yearbooks and scrapbooks.

We know not everyone likes a good digital search. Some still prefer to hold a newspaper in their hands.

While we limit access to the original editions of our newspaper, an ongoing project of the Office of Communications is to make all new scans of the Denver Catholic throughout its history available to the public in bound hard copies.

The red volumes, which are currently available from 1900 through 1920, are housed in the Cardinal Stafford Library, located on the St. John Paul II Center for the New Evangelization. A second collection of volumes is housed in the Office of Communications. If your eyes aren’t as sharp as they once were, bring a magnifying glass.