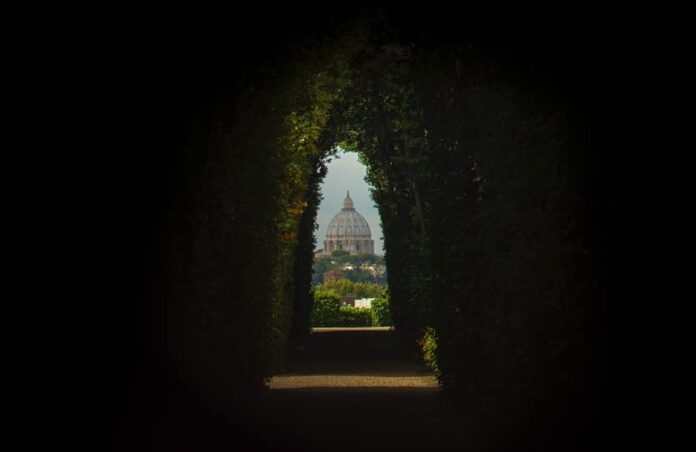 Legend has it that a dispute over the hill led to the fratricidal conflict between the city’s founders, Romulus and Remus. During the Roman Republic the Aventine was a working class neighborhood, high above the city’s most important port. In imperial Rome the Aventine was gentrified, becoming the neighborhood-of-choice for knights and senators. Later still, great palaces were built on the Aventine, which offers an unparalleled city vista.

In the fourth century, St. Jerome lived there with a circle of admirers until decamping for Jerusalem to translate the Bible into Latin. In Jerome’s day, Peter of Illyria built a great basilica dedicated to St. Sabina on the Aventine — patristic Rome’s concept of the perfect church. Today, the Aventine is a posh residential neighborhood, home to the headquarters of the Knights of Malta (with its famous keyhole view of St. Peter’s dome) and that spiky asparagus patch of liturgical crankiness, the Pontifical Atheneum of Sant’Anselmo.

For all that it’s witnessed over the centuries, however, the Aventine hadn’t previously seen what’s happened there on the past 25 years or so of Ash Wednesdays. Then, as on Ash Wednesday 2020, hundreds of English speakers climb the Aventine before dawn to receive penitential ashes and celebrate the first Mass of Lent. That “stational Mass” at St. Sabina is the first stop in a Lenten tradition that dates back to the mid-first millennium — and that’s been revivified in our time by Americans.

In the mid-centuries of the first millennium, the Bishop of Rome, his clergy, and his choir would gather every day of Lent at a starting-point church (the collecta) and process to the statio, the “station church” of the day; there, Mass was solemnly celebrated before the congregation broke its Lenten fast. Both the collecta and the station church were often outgrowths of house churches commemorating Roman martyrs. Thus the stational church pilgrimage was an itinerary of sanctity, reminding Lenten penitents that the whole point of penance is purification for sanctification and Christian witness.

In the late sixth century, Pope St. Gregory the Great standardized the station church itinerary, which was subsequently expanded a bit but retained its essential Gregorian form. If you have an old daily missal at hand, you can find an echo of this pilgrimage tradition at the beginning of each Lenten day’s Mass. There, you’ll see a notation like “Ash Wednesday: Station at St. Sabina” or “Thursday after Ash Wednesday: Station at St. George.” Those notations continue throughout Easter Week, as the traditional pilgrimage lasted until the Octave of Easter (which we know as Divine Mercy Sunday).

The Roman station church pilgrimage of Lent began to disappear in the late first millennium. But its memory remained in all those missals, germinating. And in the mid-1970s, that memory bore fruit: American seminarians in Rome began to walk the ancient paths of the stational pilgrimage, to participate in Mass at the traditional station church of the day. By the early 1990s, the station church pilgrimage had become a major feature of the pastoral activity of the Pontifical North American College. Now, seminarians, students from the Rome campuses of Anglophone universities, diplomats, English-speaking members of the Roman Curia, and alert tourists all participate in this striking contemporary revival of a venerable tradition. The North American College organizes the entire pilgrimage and takes up a daily collection at the station churches for the relief of hard-pressed Christians in some part of the world.

To offer others the opportunity to experience something of the texture of this pilgrimage from home, I spent two months in the Eternal City in 2011, making the entire station church pilgrimage with my friend Elizabeth Lev, Rome’s pre-eminent art-and-architecture guide, and my son Stephen, a gifted architectural photographer. The result was the book Roman Pilgrimage: The Station Churches, which includes Liz’s brilliant descriptions of the churches, Stephen’s superb photography, and my commentaries on the liturgical texts of each day of Lent. If you’ve got a tablet, I recommend the eBook; every photograph is in color and a zoom function allows closer study of each image.

I once asked another friend, Hannah Suchocka, then the Polish ambassador to the Holy See, why she regularly attended the English-language station church Mass at 7 a.m.; surely the evening stational Mass sponsored by the Diocese of Rome would be more convenient? “I found a living church here,” Ambassador Suchocka replied.

Something to ponder, this Lent, amidst so many concerns about the problems of U.S. Catholicism. We do get some things right. And they’re important things.