Attacks on symbols of faith must not be ignored 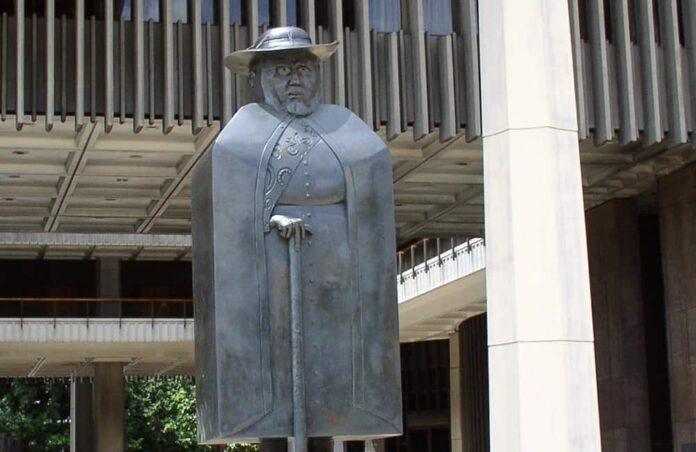 Over the weekend of August 8-9, someone beheaded a statue of St. Jude at Our Lady of Guadalupe Parish in Denver.  This attack is one in a series of destructive acts and defacements around the country that target Catholics and the faith that we hold dear. The message seems to be that the Catholic faith is not welcome by these violent individuals, and we cannot allow this response to be met with silence.

As people of faith, we must respond to this destruction with prayer for the vandals’ conversion and by persistently making known the freedom and flourishing that the Catholic faith brings to countless people. We also need to continue to insist that the Catholic faith has a place in shaping the direction of society and to find creative ways to share the life-changing Gospel with our neighbors and communities.

The fact is, those who denounce the Church are condemning what they think the Church is, not who she actually is. To quote from Venerable Archbishop Fulton Sheen, “There are not over a hundred people in the United States who hate the Catholic Church. There are millions, however, who hate what they wrongly believe to be the Catholic Church…As a matter of fact, if we Catholics believed all of the untruths and lies which were said against the Church, we probably would hate the Church a thousand times more than they do” (Preface to Radio Replies).

It is certainly true that the faithful of the Church are far from perfect and that there are examples of how members have failed to live out the Gospel. Aside from Jesus and Mary, every Catholic alive today is a sinner, including me.

But the eternal and temporal impact that has been experienced by so many souls over 2,000 years far outweighs these negative examples. Who can criticize the beauty of the artistic masterpieces created to worship God like the Sistine Chapel, the millions of people educated by the creation of the university system, or the countless people cared for in hospitals by Catholics motivated by their love for God? And what about the hundreds of saints who have cared for the poorest of the poor like St. Mother Teresa? And most importantly, what about the vast number of people whose souls are eternally impacted by the forgiveness, healing and freedom that comes from knowing Jesus and his Church?

The Founding Fathers of our country recognized the good that religion contributes to society and intentionally ensured with the First Amendment that it was protected from government interference. Thomas Jefferson’s “wall of separation” metaphor was not a demand for separation of religion and politics; rather a reinforcement of the establishment and free exercise clauses that protect religion, and those who practice their faith, from government overreach. In the last few decades this has been flipped on its head, with people saying that churches must be excluded from public life, that one may not bring their faith into the public square and that it must be lived only in the private sphere. This is not the way of Christianity, or any faith.

In our current political and cultural environment, it is obvious that people have forgotten history and that Catholics and other people of faith are being smeared with propaganda that portrays us as hateful and bigoted. Secularism, a false god, is winning the day and leading us into violence and hatred.

The ridiculous nature of these attacks is revealed when our statutes, churches and people are attacked. For example, why would Rep. Alexandria Ocasio-Cortez use a statue of Saint Damien of Molokai as an example of what she called a “white supremacist culture” among the statues at Capitol Hill? Saint Damien of Molokai did not come to Hawaii seeking to impose his culture. No, he came to Hawaii and served its lepers because he loved Christ and loved the Hawaiian people. St. Damien died from leprosy that he contracted while serving the people he loved. Similarly, St. Junipero Serra, whose statues have been attacked, advocated for the indigenous people where he evangelized. He may not have led an uprising against the authorities on behalf of the indigenous as modern activists would have preferred, but he was a tireless advocate of the Native Americans and honest people cannot overlook this.

Turning back to Denver, it is quite unlikely that the people who beheaded St. Jude’s statue know that he is the patron saint of hope and impossible causes. His statue wasn’t attacked because of who St. Jude is known to intercede for or his efforts to evangelize the Middle East. Except in cases of mental illness, the attacks against St. Jude’s statue and the dozens of other Catholic symbols around the country, is being done either out of complete ignorance or out of hatred for the faith. We should not and cannot take this lightly.

Instead, we should strongly respond with prayer like the parishioners of Our Lady of Guadalupe, who are praying for the conversion of the perpetrators. And we must also respond by courageously sharing our joy and freedom in Christ with our neighbors, cities and country, while also insisting on the great good that the Church contributes to society. In doing so, we can help demonstrate how false the claims made about the Church are.

On August 15, the archdiocese began a Rosary Crusade to pray for our world, country and Church. As an initial step in responding to these attacks on our faith, I invite everyone to participate in this prayer campaign, with a focus on the protection of religious freedom in our society and in reparation for the sins committed against human life and the Church. Our Lady of Guadalupe, our Mother, pray for us!

Featured image: Statue of St. Damien of Molokai at the entrance to the Hawaii State House. (Photo by blahedo – Self-photographed, CC BY-SA 2.5)

Archbishop Samuel J. Aquila
The Most Rev. Samuel J. Aquila is the eighth bishop of Denver and its fifth archbishop. His episcopal motto is, "Do whatever he tells you" (Jn 2:5).
RELATED ARTICLES
Catholic Education