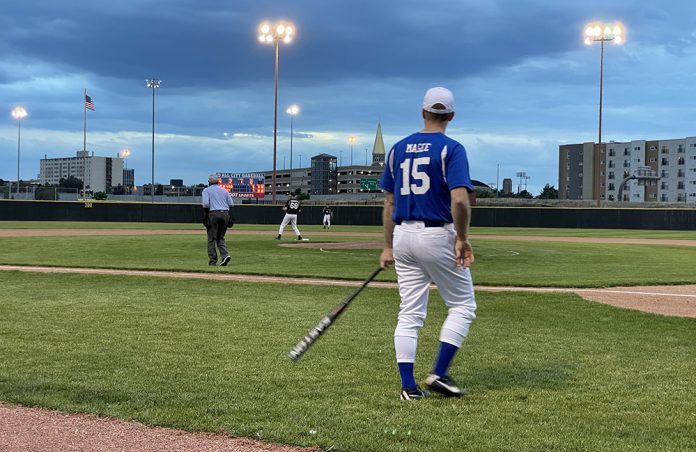 On the warm summer evening of Aug. 26, under the Friday Night Lights at the All-City Baseball Field in Denver, two all-star softball teams went head-to-head. However, these teams weren’t comprised of major league athletes in the traditional sense, though some of them made DiMaggio-like strides and base hits that would make Babe Ruth proud; no, the all-stars that graced the presence of this field were those of the clerical variety; namely, Catholic priests.

On this particular night, these men traded in collars and vestments for hats and custom jerseys, and hit the diamond for a bit of friendly competition for a good cause. More than just an excuse to get some priests together and give them a much-needed chance to just be regular guys for a night, the proceeds of ticket sales for the evening benefited the vocations programs for the three Colorado dioceses. This marked the second year for the Priest Softball Game, which is organized by Catholic Radio Network and sponsored by the Archdiocese of Denver’s Catholic Funeral and Cemetery Services, Fidelis Catholic Credit Union and the Knights of Columbus Wheaton Agency.

As far as softball games go, attendees couldn’t have asked for a better game. Families came from all over the archdiocese to cheer on their priest, and at times, the energy on and around the field rivaled that of a Rockies game — and that’s saying something. Both teams — Team Blue and Team Black — featured an impressive roster of priests, mostly from the Archdiocese of Denver with a handful from the Diocese of Pueblo, as well as a deacon and some seminarians.

The game got off to an exhilarating start, with St. Thomas Aquinas Parochial Vicar Father Matt Magee on Team Blue cracking a hit that scored the first two runs of the game.

The momentum only built from there. Team Blue took an early lead, replete with sweet slide-ins from several priests, including Fathers Nathan Goebel and CJ Mast.

The crowd not only consisted of parishioners from various parishes of the archdiocese but also a rowdy bunch of seminarians, who were appropriately (and affectionately) named the “Bleacher Preachers” by the announcers. Fans approached Father Jason Wallace and Father Ryan O’Neill of Team Black with softballs to sign, which they happily obliged.

The nail-biting nature of the game remained throughout, as both teams stayed neck-in-neck, closely tailing each other inning after inning. It wasn’t until the bottom of the sixth that Team Black made their move; a few good hits gave them the runs they needed to pull ahead of Team Blue. It was looking good for Black as Blue closed out the sixth inning, but at the top of the seventh, Team Blue dazzled with several grand slams and base hits during which they caught back up with Team Black and eventually regained their lead.

By the top of the eighth, it was clear that Black wasn’t coming back. In the end, Team Blue were the victors of the second annual Priest Softball Game with a final score of 21-14.

Although only one team could be declared the winner, there really were no losers at the Priest Softball Game. Every single priest on that field was smiling ear to ear, and the crowd left energized, having just enjoyed what can aptly be described as a great game. Best of all, we felt good knowing that all the money raised that night was going toward the formation of priests; as anyone who witnessed that game or witnesses the self-sacrifice of their own priest day in and day out knows, our priests deserve to be recognized as the all-stars that they are, and they also deserve our utmost support, both on and off the field.