Around the Archdiocese: Catholic Schools 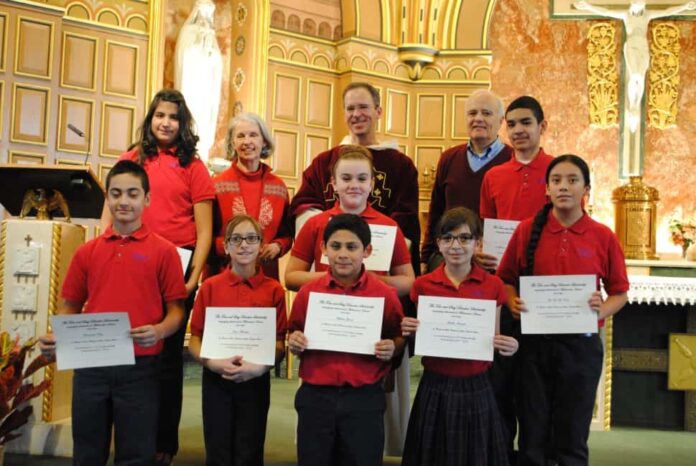 It pays to study math and science

Holy Family High School graduate Sophie Wilcomb, class of 2012, was moved to serve her community at home and abroad after participating in the Broomfield school’s Apostolic Ministry Program. Wilcomb said, “Holy Family’s emphasis on community service and social justice instilled in me a love for helping others that I will carry with me throughout my life.” In 2013, Wilcomb, shown above, traveled with other Gonzaga University students to Nicaragua to build a second school. She also contributed to a water project for a village in Panama and raised money for children with Type 1 diabetes by climbing 14ers.

All Souls School students and teachers form the number “30” to honor their principal’s three decades of work at the Englewood school. Shortly after, principal William Moore announced his retirement. He was honored for his service to the private school and for working to “positively impact the community through Catholic values.” Students wore anniversary T-shirts and raised funds to purchase new laptops, computers and other needed updates to the school. “I think his greatest attribute is his willingness to try to help everyone: teachers, students and parents,” said long-time teacher Sue Troxel.

Award-winning Brazilian pianist and composer Marcello Cesena performed for Holy Family High School students in theology teacher Matthew Gear’s class in December. After performing classical works in Lafayette, Cesena was invited to perform for the Broomfield school’s students. “The performances at Holy Family were very well received by all of those in attendance: students and faculty alike. I hope to have him back next year,” Gear said.