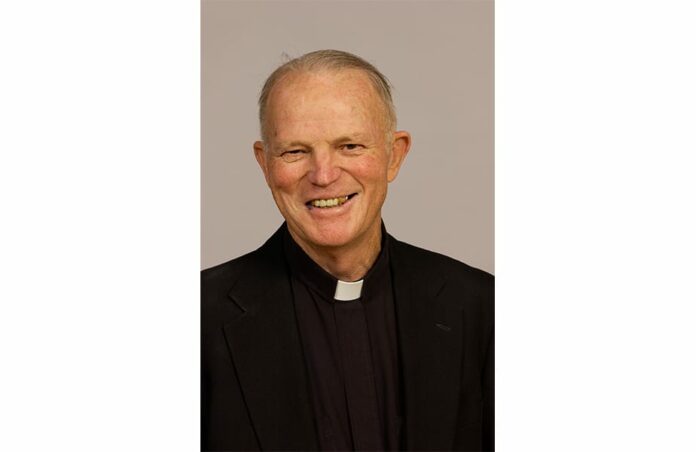 Father James Purfield, who marked his 65th anniversary as a priest last year and was the eldest priest in the Denver Archdiocese, died Feb. 19. He was 93.

During his long priesthood he served in numerous parishes in metro-Denver and Colorado Springs, did mission work outside the country, pastored a noteworthy 30 years at All Saints Parish, and was known for his faithful service to the homebound and compassionate aid to the needy.

“He excelled in loving those who no one else noticed and who would come at the most inconvenient times,” Father Roland Freeman said in the eulogy at his longtime friend’s funeral Mass Feb. 24 at Denver’s Cathedral Basilica of the Immaculate Conception. “[He had a] deep awareness of Christ the poor one who is always with us.”

James Richard Purfield was born in Colorado Springs on Aug. 26, 1926 to U.S. Army Col. Emmett J. Purfield and Helen Carson Purfield. When he graduated from Cheyenne Mountain High School in 1944, World War II was still ongoing. He entered the U.S. Navy and served as a Seaman 1stClass until June 1946. While in the Navy, he was stationed six months at a shore station on the island of Trinidad, British West Indies.

“He met a priest on the island of Trinidad whose name was Father James Purfield, I think he was the one who really convinced Father Jim to become a priest,” the priest’s younger brother, Bill Purfield, said with a gentle laugh.

After being honorably discharged, he attended Maryknoll Junior Seminary in Los Altos Calif., for a short time before working a brief stint at a Phoenix newspaper as part of the Maryknoll’s Christopher Movement. He entered St. Thomas Seminary in Denver in 1948 and was ordained to the priesthood on May 29, 1954.

He ministered as chaplain at Penrose Hospital in Colorado Springs. He also served on mission for a year in Mexico in the mid-1970s and a year in Lima, Peru, in the early 1980s.

During Father Purfield’s three decades as pastor at All Saints, his brother was among his parishioners.

“I always called him Father Jim,” said Bill Purfield, expressing his respect and admiration for his elder brother. “He was really great about helping people, particularly people who were homebound. He did a lot of that.”

The priest’s longtime friend and former parishioner Dolores Batter agreed, noting that even after Father Purfield retired at 88 in 2014, he continued visiting the homebound until last year.

“On a weekly run, he’d visit eight to 11 people and it took the entire day,” she said, adding that he also celebrated Mass for the residents of Denver’s Porter Place Assisted Living for 30-plus years. “Father’s last Mass at Porter Place was January 13, 2019. He was 92.”

Father Purfield was known for his listening ear, wise counsel and financial help, Batter said listing many who testified to the good guidance and generous aid he had given—often out of his own pocket—with needs ranging from groceries to transportation.

“The good Lord knew what he was doing when he chose Father as one of his servants,” Batter said.

He had a deep prayer life that undergirded his ministry, strong opinions that he vociferously shared, was a loyal friend and relished playing cards, Father Freeman said in the funeral eulogy.

“His ministry was the same as Jesus’s,” he said. “To invite into his love and friendship all who in God’s providence came to him.”

“Father Purfield loved his priesthood,” emphasized Father Freeman. “For him it was the most precious gift of his life.”

A rosary and vigil were held at All Saints Church on Feb. 23. Archbishop Samuel Aquila was the main celebrant at the funeral Mass held the next day at the Cathedral Basilica. Burial followed at Mount Olivet Cemetery.