With a desire to “shine the bright light of transparency” on the tragedy of sexual abuse of minors within the Church, Denver Archbishop Samuel J. Aquila has announced that the three Colorado dioceses have voluntarily partnered with Colorado Attorney General Phil Weiser to conduct an independent review of the dioceses’ files and policies related to the sexual abuse of children.

In a joint news conference on February 19 at the attorney general’s office, it was also announced that the three dioceses will voluntarily fund an independent reparations program for survivors of such abuse.

“The damage inflicted upon young people and their families by sexual abuse, especially when it’s committed by a trusted person like a priest, is profound,” said Archbishop Aquila. “While this process will certainly include painful moments and cannot ever fully restore what was lost, we pray that it will at least begin the healing process.”

It is well known that child sexual abuse is a societal problem that demands attention and action,” said Weiser. “I am pleased the Church has recognized the need for transparency and reparations for victims.”

Discussions for these two initiatives began last year with former Colorado Attorney General Cynthia Coffman, and then finalized recently with Weiser. Both Coffman and Weiser praised the dioceses’ willingness to address this issue.

“It is well known that child sexual abuse is a societal problem that demands attention and action,” said Weiser. “I am pleased the Church has recognized the need for transparency and reparations for victims.”

“[The dioceses] demonstrated their commitment to acknowledging past abuse by priests and moving forward with honesty and accountability.”

The independent file review will be handled by Robert Toyer, a former U.S. Attorney for Colorado. His final report is expected to be released in the fall of 2019 and will include a list of diocesan priests with substantiated allegations of sexual abuse of minors, along with a review of the dioceses’ handling of the allegations. The report will also include an evaluation of the dioceses’ current policies and procedures, something that was not included in other states’ reviews, such as the Pennsylvania Grand Jury Report.

“We in Colorado have found our own way in the wake of the Pennsylvania Grand Jury report,” said Weiser. “We have a set of dioceses here who came to the table to develop appropriate solutions that are collaborative, committed to transparency and put victims first. 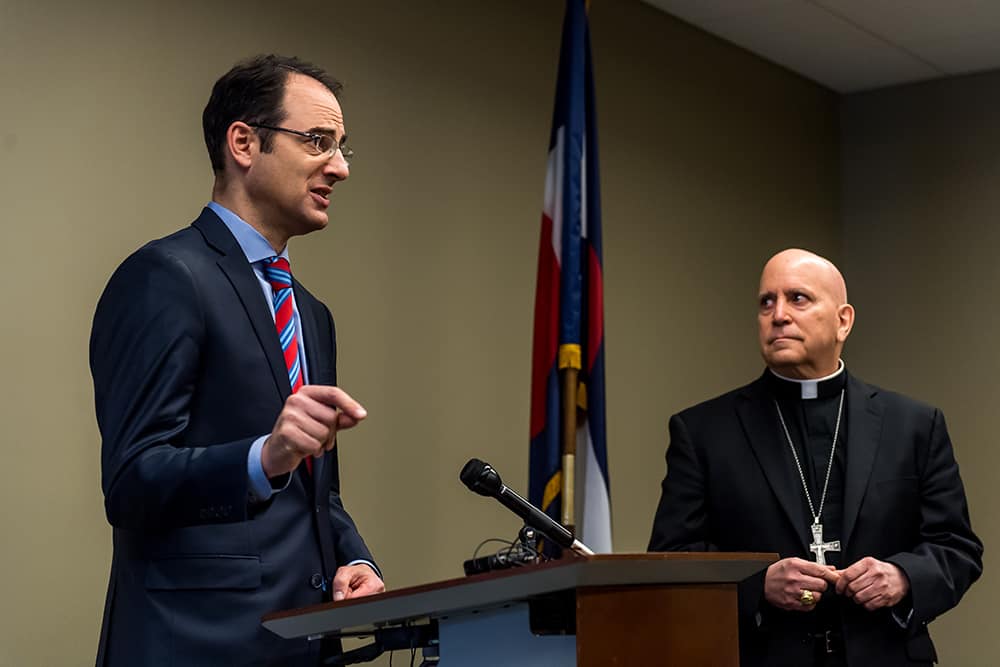 Colorado Attorney General Phil Weiser, alongside Denver Archbishop Samuel J. Aquila, speaks during a press conference announcing a comprehensive joint agreement with the Colorado Attorney General’s Office to conduct an independent review of the dioceses’ files and policies related to the sexual abuse of children at the Ralph L. Carr Colorado Judicial Center on February 19, 2019, in Denver, Colorado. (Photo by Anya Semenoff/Archdiocese of Denver)

“This is not a criminal investigation. This is an independent inquiry with the full cooperation of the Catholic Church,” said Weiser.

Since 1991, the Archdiocese of Denver has had a policy of mandatory reporting of all allegations to local authorities. The procedures were further strengthened by the 2002 Dallas Charter to include comprehensive background checks, zero-tolerance policies, safe environment training, and training for children as well.

“This independent file review presents an opportunity for an honest and fair evaluation of the Church in Colorado’s historical handling of the sexual abuse of minors by priests,” said Archbishop Aquila.  “We are confident in the steps we have taken to address this issue and that there are no priests in active ministry currently under investigation.”

We have a set of dioceses here who came to the table to develop appropriate solutions that are collaborative, committed to transparency and put victims first.”

The independent reparations program will be run by two nationally recognized claims administration experts, Kenneth R. Feinberg and Camille S. Biros, who will review individual cases and make financial awards to victims who elect to participate. The victims are free to accept or reject the award, but the Colorado dioceses are bound by what the administrators decide.

The program will have oversight provided by an independent committee chaired by former U.S. Senator Hank Brown. More details will be announced in the coming months, and the program will officially open closer to the release of the final report.

This is similar to a program instituted by former Denver Archbishop Charles Chaput in 2006. Archbishop Aquila said it is important for local Catholics to know the program will be funded by archdiocesan reserves, with no money being taken from ministries or charities at parishes, annual diocesan appeals, or Catholic Charities.

“With humility and repentance, we hope the programs announced today offer a path to healing for survivors and their families,” Archbishop Aquila said.

And acknowledging how painful this has been for everyone in the Church, Archbishop Aquila said he hopes this is step towards restoring confidence among the faithful.

“Helping people to restore their trust, to live their faith, that is essential,” said Archbishop Aquila. “And to help them have a deeper encounter with Jesus Christ, so that is my goal in all of this. I know that healing is possible in Jesus Christ.”

For a copy of the full agreement and a detailed FAQ, visit archden.org/promise.

COMING UP: Seeking healing and justice for survivors

Last year I made a promise that the Archdiocese of Denver would be transparent about our handling, prevention and response to the sexual abuse of minors by priests. We have been working to continue to deliver on that promise, and this week has brought forth two fruits of that effort.

After months of dialogue with Colorado’s former and current Attorney General, the three dioceses of Colorado have voluntarily entered into a joint agreement that will result in an independent review of priest personnel files. This review will be entrusted to an independent “special master,” former United States Attorney Robert Troyer, who will comb through the files to determine which priests have received substantiated allegations of sexual abuse against a minor. Those who fit this description will then have their names made public in a report.

This will also be an important opportunity for an honest and fair evaluation of our historical handling of the sexual abuse of minors by priests and for a review of our current policies and procedures. We are confident in our track record over the past few decades, the steps we have taken to address this issue and that there are no current accusations against any of our priests. At the same time, we hope this announcement will move anyone who has been harmed to come forward.

The Archdiocese of Denver and the Attorney General’s office were able to reach this agreement because we share common goals: justice and healing for survivors, accountability, transparency and the need for the facts about our track record to be more widely known.

I also hope that this independent file review will help bring justice to our 300 active priests, whose fruitful and sacrificial ministry is too often unfairly tarnished by the sins of a small group of priests that came before them. It is worth noting that our priests have been supportive and instrumental in the process of implementing the safe environment protocols that have made our parishes and ministries far safer than they were prior to 2002.

In conjunction with the independent file review, the three Colorado dioceses are also launching a survivor compensation program like the effort undertaken by Archbishop Chaput in 2006. While the archdiocese has been assisting victims for years, I strongly desired to extend this outreach further to try to bring some measure of healing to those who have been harmed.

The damage inflicted upon young people and their families by sexual abuse, especially when it’s committed by a trusted person like a priest, is profound. And while money can’t heal wounds, it can acknowledge the evil that was done and help restore peace and dignity to the survivors.

The survivor compensation program will be administered by a national mediation expert, Mr. Kenneth Feinberg, and his colleague, Ms. Camille Biros. Mr. Feinberg and Ms. Biros will receive allegations from those who were abused as minors by priests or bishops and will impartially determine what assistance is needed to help these survivors. Their work will be entirely independent of the archdiocese and will be overseen by an independent committee of respected Coloradans and national experts.  The chairman of that committee will be former U.S. Senator Hank Brown.

It’s important for Catholics to know that the costs of this program will be covered by archdiocesan assets and reserves. No funds from ministries or charities at your parish, the Archbishop’s Catholic Appeal, or Catholic Charities will be used for this program.

While this process will certainly include painful moments and cannot ever fully restore what was lost, I pray that it will at least begin the healing process.

Despite the sins of the Church’s members, we must remember that Jesus is the ultimate source of healing for every wound. The words of St. Mother Teresa, who spent her life caring for the suffering, come to mind. “Bring all your suffering to [Jesus] … only open your heart to be loved by Him as you are. He will do the rest.”

Please visit Archden.org/Promise for updates on the full the details of the file review and survivor compensation program.