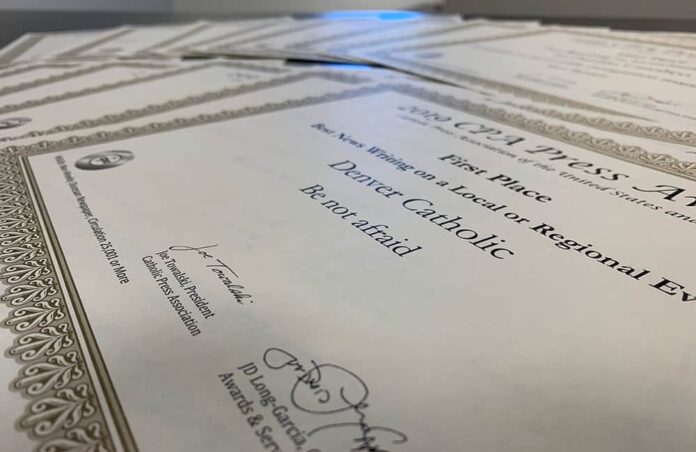 Coverage of the More Than You Realize conference and reporting on social justice issues were among the 15 honors the Catholic Press Association awarded the Denver Catholic and El Pueblo Catolico at the recent Catholic media conference in Florida, June 18-21.

Bishop Jorge Rodriguez was also awarded first place for a regular column by a bishop or archbishop in a Spanish publication.

The Denver Catholic received seven awards, including first place best news writing on a local or regional event for the staff’s collaborative coverage of the MTYR conference June 11, 2018, at the Budweiser Events Center in Loveland.

El Pueblo Catolico received eight awards, including first place for reporting on social justice issues for a story on preventing suicide, and second place for in-depth analysis for a story on the debates surrounding “caravans” of immigrants coming to the United States.

Staff writer Vladimir Mauricio-Pérez, who was recently named the new editor of El Pueblo Catolico, took home four awards – two for articles in the Denver Catholic and two for articles in El Pueblo. For the Denver Catholic, he received a second-place editorial award for a story on the Facebook privacy scandal, and an honorable mention award for a feature story on Blind Faith Brewing.

The publications were also honored with awards for layout, design, interviews and reports.

“I want to congratulate the staff of the Denver Catholic and El Pueblo Catolico for their accomplishments over the past year and the much-deserved recognition they’ve received for their incredible talents,” said Aaron Lambert, Managing Editor. “More importantly, I am thankful for each of their witnesses to Jesus Christ, without whom we would not be able to carry out this mission we’ve been entrusted with. Last but not least, I want to thank the faithful of the Archdiocese of Denver for their support, encouragement, comments and feedback, and most of all, for allowing us to tell your stories.”

1st Place – Best News Writing on a Local or Regional Event – “Be Not Afraid” https://denvercatholic.org/past-25-years-remembered-next-25-anticipated-at-more-than-you-realize-conference/

Honorable Mention – Best Layout of Article or Column – “From the Passover Seder to the Eucharist” (Vladimir Mauricio-Perez, Simona Fava)

Mark Haas
Mark Haas is the Director of Public Relations for the Archdiocese of Denver.
RELATED ARTICLES
Events