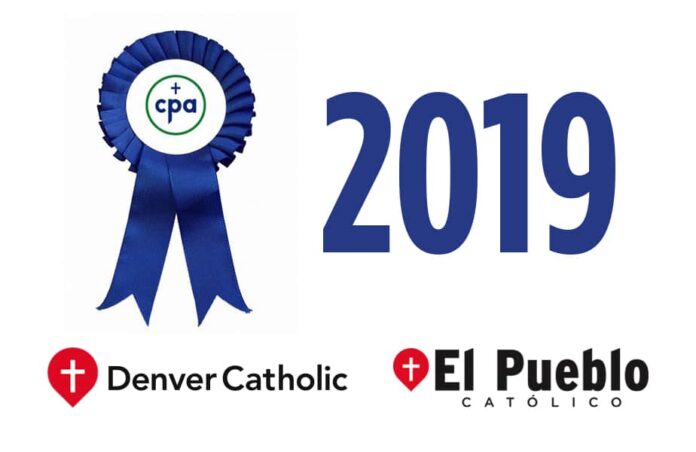 It’s Catholic Press Awards season, and we are pleased to announce that the Denver Catholic and El Pueblo Católico were honored on a national level once more this year, taking home 10 awards.

Highlights from the first place awards are Best Redesign for El Pueblo Católico, which switched to a gorgeous magazine format last year, and Best Chart or Information Graphic for last year’s “The Eucharist Throughout History” timeline, compiled by Vladimir Mauricio-Perez and designed by Simona Fava.

“Last year was a busy one for our team, but the quality of work and willingness to go above and beyond remained consistent,” said Aaron Lambert, managing editor of the Denver Catholic. “I am constantly amazed by the commitment and faith of the people of the publications and creative design team. These awards are very well-deserved.

“I want to thank Archbishop Samuel J. Aquila and the leadership of the Archdiocese of Denver for their support and guidance, the talented team of people I am blessed to work with for being so inspiring on a daily basis, and last but not least, the Catholic faithful of the archdiocese for entrusting us with keeping you informed about the Church and allowing us to tell your inspiring stories.”

Best Use of Graphics – Best Chart or Information Graphic (First Place): The Eucharist Throughout History

Best Editorial on a National or International Issue (Second Place): The Shock of Forgiveness

Best Coverage of Violence in Our Communities (Honorable Mention): STEM Shooting Hero Remembered for His Unwavering Kindness and Faith