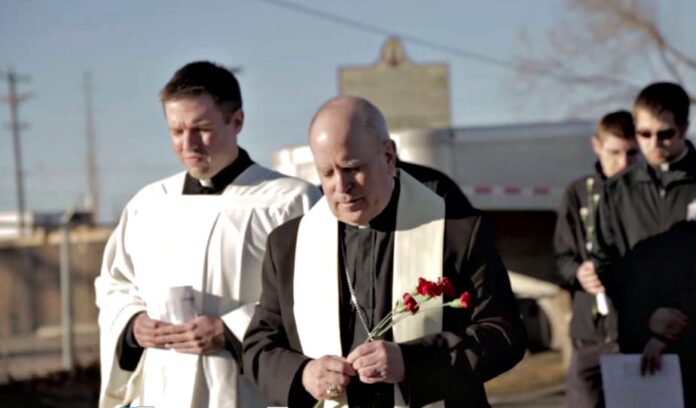 Archbishop Samuel J. Aquila is inviting all Coloradans of goodwill to spend 10 minutes in prayer over the weekend, and to take action against a proposed bill that would enshrine the “right to abortion” into state law.

In a letter issued Friday afternoon, the archbishop informed the faithful of Senate Bill 175, the Reproductive Health Freedom Act, which passed through committee on party lines last Thursday.

“This over-reaching piece of legislation would essentially shut down any attempt to pass life-affirming legislation in Colorado ever again,” the archbishop stated. “It enshrines the culture of death into law and ignores science.”

He noted that the bill would affect the ability of Coloradans to enact legislation requiring ultrasounds, waiting periods, and parental involvement for minors. It would also prevent any type of regulation on abortion pills, even for minors.

“Advocates of this bill seek the absolute ‘right to abortion’ for girls as young as 10 or 11 without a parent’s knowledge, guidance or advice,” the archbishop notes. “Parents are seen as unfit in the moral guidance of their children.”

The letter comes on the same day that Pope Francis came out with some of his strongest statements in favor of children, in which he stated that “human life is sacred and inviolable.”

“Every civil right rests on the recognition of the first and fundamental right of life,” the pope added, “which is not subordinated to any condition, either qualitative or economic and least of all ideological.”

“This bill would protect the ‘only one form of thought’ that Pope Francis warns against and undermine the freedom of one’s conscience to promote the dignity of human life and the unborn child,” Archbishop Aquila wrote.

He also noted that the bill would eliminate what pro-abortion activists call “burdensome” abortion clinic health code regulations. “Remember Kermit Gosnell in Philadelphia, and the horrific images and stories of women nearly dying on the abortionist’s table?” he asked. “That is what an unregulated abortion clinic looks like! This bill is not good for the women and girls of Colorado!”

Archbishop Aquila asked all Coloradans to spend at least 10 minutes in prayer, to “plead to Our Lord for His intercession on behalf of life in Colorado,” as well as for the “conversion of the heart and mind of those who support such irrational, unscientific, and a denial of conscience legislation.”

“But don’t stop there,” he added. “As a conclusion of your prayer, ask Our Lord what action he wants from you. You are called to be a leaven for good and for life in society.”

Some ideas he gives include writing to State Senators, contacting the media and spreading the word in each person’s social networks.

“It would be a beautiful testimony on the part of the people of Colorado who support life if each senator in Colorado would wake up on Monday morning with hundreds of emails asking them to oppose SB175,” he noted.

Finally, he encourages Coloradans to be “people of hope.”

“Many of you have lost faith in politics, but remember that attitude is not of God,” he wrote. “Christians are a people of hope! No action taken in defense of life is meaningless, particularly if it comes from a place of prayer and the Gospel.”

“Together we can make a stand for life here in Colorado!” he concluded.