His Church. Our Experience.
Subscribe
HomeLocalArchbishop reveals a personal side
Local

Archbishop reveals a personal side 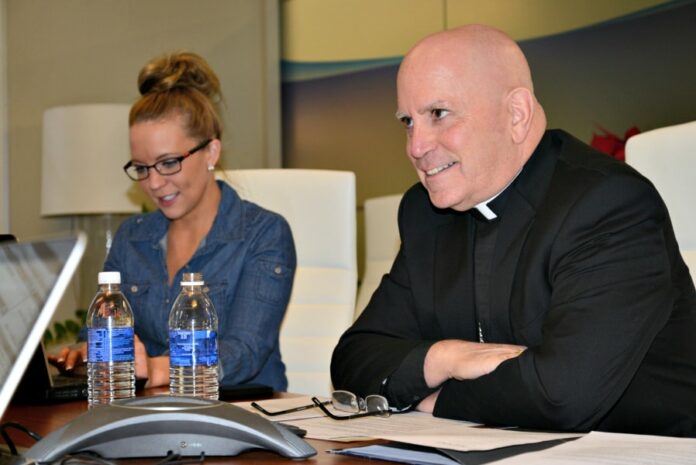 It was a few nights before Christmas, when all through the land, Catholics picked up their phones to hear the archbishop’s greeting and message of great joy.

“Hello, this is Archbishop Samuel Aquila,” was the recording thousands of parishioners heard when they answered their phone around 7 p.m. Sunday.

The archbishop’s Christmas call marked the first TeleForum event for the Archdiocese of Denver, in which the archbishop spoke to thousands of Catholics of northern Colorado in a live town hall-like phone call.

During the hour-long event, he shared insights on the gift of Christmas, his own personal encounter with Christ, and he answered 13 live questions from participants on everything from what’s it like to be an archbishop to difficulties in parish life.

The TeleForum is a live phone event developed by the Highlands Ranch-based company Broadnet, and donated to the Archdiocese of Denver as a way to open communication between the archbishop and the everyday Catholic in the pews.

“This Christmas it would be good for each of us to ask the Lord to draw near to us and show the Lord how much we love him in return of his love,” Archbishop Aquila said in his opening comments.

He said the way to return love is to receive it first. He advised faithful to listen to the Lord’s call of love—whether it’s to a particular vocation, to reconcile with a family member, to let go of fears or pray daily—and to not be afraid.

“The important thing is not to be afraid, to become an authentic and intentional disciple of Jesus who humbled himself to enter our world as an infant, as a child,” he continued. “He came to save us all. He offers that gift of salvation to us at Christmas and throughout the year.”

By the time the archbishop was ready to take questions, dozens of participants were waiting in line for their opportunity to speak live with the archbishop. During the entire hour, about 460 people had either asked a question or left a voicemail message for archbishop.

One participant, Linda, asked how to share the truth of the faith with fallen-away Catholics who hear secular media’s skewed reports on Pope Francis.

He then suggested media outlets that are trustworthy, including the Vatican website www.vatican.va.

The questions callers posed were as varied as the caller’s ages. One 70-year-old woman, Marie, asked about receiving financial help for herself and her disabled daughter, and a 12-year-old boy, Adrian, called with his mother from Basalt.

“Is it easy being bishop?” Adrian asked.

“Parts of it are easy and parts of it are challenging,” the archbishop said. “But for the most part it is a real gift and blessing.”

The archbishop then spoke to the young boy about praying to God and asking him to reveal his vocation.

“Jesus has a call for every human being that only you and you alone can fulfill, and no one else can fulfill that,” he said. “It’s very important for you to open your heart to Jesus and to ask him and pray about what his plan is for your life.”

“We have so much strife going on in our country right now,” he stated to the archbishop. “How can we keep focus on the positive and the good going on in this season right now?”

The archbishop said the battle between good and evil is very real, pointing to recent events—the execution of two New York police officers over the weekend and the slaughter of school children in Pakistan—as examples.

“The Christian message is that no matter how strong the persecution may be, no matter how evil presents itself, we know Jesus Christ has conquered sin and death and God is stronger than evil,” the archbishop said. “So it becomes all the more important for every Christian, every Catholic, to give witness to Jesus Christ.”

He said the world will not improve until “we live our faith out and live it out authentically—and inviting others to come to know the Lord and encounter the Lord and truly be joyful witnesses.”

At the end of the event, the archbishop wished “a very blessed and holy Christmas to all of you,” and extended his blessing on the participants.

Participants also voted in polls during the interactive call. Polls revealed the Denver Catholic Register is the preferred source of Catholic news for 49 percent of the participants who were listening, before their parish bulletin or the Sunday homily. About 73 percent responded that they were interested in participating in more calls with the archbishop.

The live TeleForum event was the first for any archdiocese in the nation, according to Broadnet. Since 2004, the company has managed interactive phone calls involving politicians, world leaders, professional sport teams like the Denver Broncos and other faith-based organizations.

4,471 largest number of participants at one time
1,900 stayed on the call for 20-35 minutes
268 left voicemail messages
192 asked questions
13 questions were answered live