His Church. Our Experience.
Subscribe
HomeLocalYou responded, made a difference
Local

You responded, made a difference 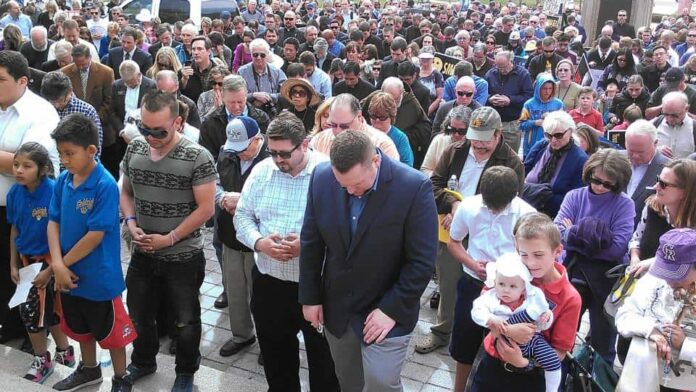 Archbishop Samuel J. Aquila gave credit for the pro-life victory in Colorado tonight to the people of Colorado “who listened to God’s call” and voiced their opposition to the abortion rights bill known as SB175.

“You are the ones who made a difference!” he wrote in a statement released shortly after state senators killed the bill even before debating it in the Senate. The legislation sought to create an absolute right to abortion in Colorado, and possibly undo life-affirming laws already on the books.

Faith-filled citizens inundated state senators with phone calls, emails and personal requests to support mothers and the unborn by voting down the bill, touted as the “The Reproductive Health Freedom Act.”

On Tuesday, with less than a day’s notice, as estimated 1,000 Coloradans gathered at the state Capitol building at 3 p.m., the Hour of Mercy, to join Archbishop Samuel Aquila to pray for the defeat of SB175. He was joined by Father Ambrose Omayas, assistant administrator of the Greek Orthodox Metropolis of Denver.

“As I said yesterday after we prayed together on the steps of the state Capitol,” the archbishop wrote, “I had no idea how much impact my letter would have on the people of Colorado. In just a few days we are able to raise a united front in opposition to Senate Bill 175 and in defense of unborn children, the most innocent of all people.

“Congratulations to the people of good will throughout Colorado who listened to God’s call to be active in politics and to defend life at every stage!”

The archbishop then expressed gratitude towards all those who came together to pray at the state Capitol on Tuesday, including “families that came out in support of life, particularly mothers who came with their young children.”

He also thanked seminarians, priests, women religious, and those “of various faiths who work each and every day to be a leaven in society for the common good.”

Archbishop Aquila expressed “deep gratitude” to Father Omayas, “who joined me in a particularly moving way on the steps of the state Capitol to pray and bless the people present.”

He also thanked Bishop Michael Sheridan of Colorado Springs and Bishop Stephen Berg of Pueblo, who joined him in writing a letter against SB175 to all the state senators, and Regis University president Father John Fitzgibbons, who released a public letter in opposition of SB175.

Our strength, our hope

Turning his attention to Holy Week, the archbishop noted that “these holiest days of the year are a very important moment of memory.”

“For the Catholic Christian,” he continued, “living the ‘memory’ of Christ is not like remembering some completed event that’s now relegated to history; rather, the memory of Christ is someone present in our midst – in the sacraments, in our communities – and is the same as remembering who we are, and whose we are.

“He is our strength and our hope and the one who brings joy to the human heart!”

“Our hope lies not in the powers of government,” he continued, “nor the laws of man, but in the Resurrected God-Man who conquers the grave and never ceases to be present among us, his followers.