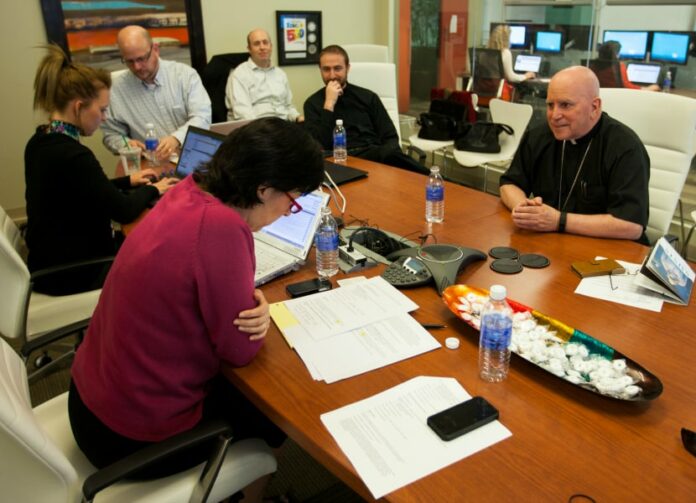 Thousands of faithful listened in on a live phone call when Archbishop Samuel Aquila explained that when it comes to receiving the sacraments, a person’s age is not as important as the love in their hearts for Christ.

“Our discipleship and our relationship with the Lord do not depend on intellectual maturity or how well we understand the sacrament itself,” the archbishop said to one participant. “What is really important is how much we love the Lord and desire closeness with the Lord and encounter him every day, and receive the grace of the sacrament to help us do that.”

An appreciation and understanding of the sacraments, including confirmation, will grow over time. In preparing younger children for confirmation, it is important to form their hearts and help them fall in love with the Lord, he said.

Some 6,751 participants listened to the archbishop’s May 28 town hall-like phone call about a restoration of the order of the sacraments of initiation. He announced a five-year process he initiated in the Archdiocese of Denver to administer the sacraments in this order: baptism, confirmation and Eucharist.

In his pastoral letter Saints Among Us, released on the solemnity of Pentecost, he wrote that “the souls of our children are the battleground” in an increasingly secular world. His hope is to make the sacramental graces of confirmation available to children at the age of reason (about 7 years old) to better aid them in a spiritual battle.

During the hour-long call, participants praised his decision, shared their fears and asked what they could do to support his initiative.

One participant asked if it was a good idea to leave the decision of receiving the sacrament of confirmation to youth. He responded the sacraments are not a decision, but a gift.

“All of the sacraments are gifts from the Lord,” the archbishop responded. “They are gifts bestowed by God. I never merit or earn any sacraments.”

Another participant, “Larry,” feared what would happen to middle-school youth without required religious education to help them continue to grow in their faith.

Participants and callers agreed that parents are the primary teachers of the faith for children. In a poll question taken during the call, 75 percent said parents have the strongest influence on a child’s faith formation.

“The parents are the first teachers of their children in the ways of faith and as such they have the responsibility to make sure that their children continue in their faith formation,” the archbishop said. “Every child, no matter what the subject, needs to continue to learn. Most parents understand that and see the importance of that.”

About 27 percent of participants also reported that the live phone call with the archbishop was helpful in learning more about the restored order.

In spreading understanding of the restored order, the archbishop encouraged the faithful to read his pastoral letter, Saints Among Us. He also suggested reading the Catechism of the Catholic Church’s sections on the sacraments, and for adults, sharing their own faith experiences with youth.

The archbishop ended the calling by thanking participants and granting them a blessing. The conference call was a live phone event developed by the Highlands Ranch-based company Broadnet as a way to open communication between the archbishop and the everyday Catholic in the pews. It was the second phone call the archbishop hosted.

Visit www.archden.org/saints for more information and a recording of the call.

Archbishop’s May 28 Teleforum on the restored order
6,751 participants on the phone, 493 online
18 questions answered live by archbishop
106 questions submitted
3 poll questions for the audience