His Church. Our Experience.
Subscribe
HomeLocalArchbishop to deacons: Make your marriages ‘stand out’
Local

Archbishop to deacons: Make your marriages ‘stand out’ 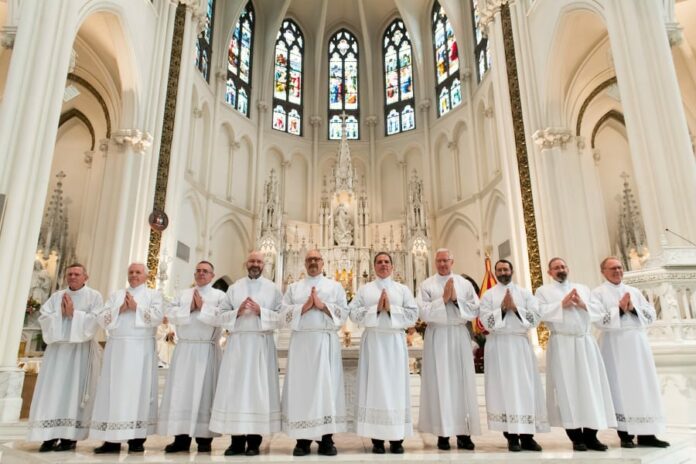 “It’s essential that your marriages stand out,” Archbishop Samuel J. Aquila told nine men who were ordained to the permanent diaconate June 17 at the Cathedral Basilica of the Immaculate Conception.

“As deacons, you will be called to serve in numerous ways,” he said in his homily before the ordination of nine permanent deacons and one transitional deacon. “Always remember that marriage is your first vocation, and that your marriage must come first.”

He called them to be witnesses to the world of “the gift of marriage and to the blessing of marriage.”

In a word to the priests who will be working with the deacons in the parishes, the Archbishop encouraged them to also remember that the deacons are married men with wives and children, and grandchildren.

“They do have a family. They do have responsibilities. And even one of them is young enough to still have six young children,” the archbishop said, referring to 39-year-old Deacon Greg Perzinski of St. Michael the Archangel Parish in Aurora.

The archbishop prayed in his closing remarks that the deacons be “witnesses in the world.”

“May the Lord whose word is truth, who has placed his word in your mouth, continue to strengthen you, and continue to guide you in your ministry,” he said. “May you continue to open your hearts to ever greater receptivity to his word, as Mary’s heart was open to his word.

“Know that Mary intercedes for you each day as her sons to lead you to the one son, her son, Jesus Christ. … May your love for him continue to increase each day, and may you be faithful servants of Christ and the Church.”

A tenth deacon was ordained at the Mass to the transitional diaconate. Shannon Thurman is currently studying to be a priest for the Archdiocese of Denver. He studies at the St. John XXIII Seminary in Massachusetts.

After the homily, each of the elect stood before the archbishop and declared their intention to be ordained. They promised to be consecrated, to discharge their office with humility so as to assist the priestly order, to preserve and proclaim the mystery of faith, to deepen their spirit of prayer, and to be conformed to the Lord’s body and blood.

“Do you promise respect and obedience to me and my successors?” the archbishop asked.

“May God who has begun a good work in you bring it to fulfillment,” the archbishop said.

The men lay prostrate before the altar while the choir and congregation sang a litany of the saints and of supplication.

The archbishop then laid hands on each of the elect and silently said the prayers of ordination.

After their ordination, the deacons were invested with the stole and dalmatic, which serve as an outward manifestation of their ordination. Each was then presented with the book of the Gospels and exhorted to believe, teach and practice what he reads.

Then the archbishop and all the deacons present gave the newly ordained the kiss of peace to welcome them into the ministry.

The Mass then proceeded, with the newly ordained deacons moving into the sanctuary to assist at the Mass.

The diaconate is one of three ranks of holy orders—deacons, priests and bishops—in the Catholic Church and dates to the time of the Apostles. The Book of Acts relates that the order was established when the Apostles told the Christian community to select “seven reputable men, filled with the Spirit and wisdom” to serve the community and free the Apostles to focus on “prayer and ministry of the word” (6:3, 4). The men were chosen and the Apostles “prayed and laid hands on them” (6:6).

Over time, the diaconate became a transitional step for men studying to be priests. It was restored as a permanent ministry by Pope Paul VI on June 18, 1967, as a result of the Second Vatican Council.

The first permanent deacons in the United States were ordained in 1971. The first in the archdiocese—10 men—were ordained by Archbishop James Casey on April 6, 1974.

The word “diaconate” comes from the Greek diakonia, which means “service.” Deacons may officiate at baptisms, weddings, wakes and funerals, and may preach and distribute Communion. They cannot consecrate the Eucharist, hear confessions or anoint the sick.

Today, there are 207 permanent deacons in the archdiocese; 179 of them are in active ministry. Deacon Arling, 70, is a native of Dayton, OH, but lives now in Broomfield with his wife of 38 years, Marianne. They have three children: Lisa, John and Michael. His parish is Nativity of Our Lord in Broomfield. He’s been an active Catholic for many years, and came to consider the diaconate after being asked several times if he had considered it.

“When I was involved in parish catechetics, hospital chapel and jail ministries in Pueblo, my enthusiasm for Mass, liturgical music, the saints, and sharing reflections was evident. Several people approached me and asked if I had considered becoming a deacon. Those affirmations pointed me in the right direction, and into discernment,” he told Denver Catholic. Deacon Beck, 70, settled in Colorado after a brief stint at St. Thomas Aquinas Seminary in Denver. He lives in Arvada with his wife, Linda, and their parish is Shrine of St. Anne. “God the Father rescued my life from alcoholism and His providential love has stayed with me all these years,” he said of his road to the diaconate.

“I pray the parishioners at St. Anne’s will support me as they have for the many years I have been there,” he told Denver Catholic. “I hope they see the human Christ in me and then, together, experience Christ’s saving divinity.” Deacon Bennett, 52, is from Yardley, PA. He and his wife Donna attend Holy Trinity Parish, and have four children: Lindsay, Dominican Sister Daniela, Kyle and Jacob. He began to consider the Diaconate after converting to Catholicism in the late 90s, but it was when he moved to Denver in 2007 that he felt a strong call to apply for the 2017 class.

“It wasn’t until a couple of people brought it to my attention after I converted in the late 90s that I started to reflect and pray on the possibility of God calling me to the diaconate,” he told Denver Catholic. “When I moved to Denver in 2007 my discernment continued and I felt like the Lord was leading me to apply for the class of 2017.” Deacon Goldwire, 52, is a native of Toledo, Ohio, and currently lives in Lakewood. He and his wife, Miki, attend St. Vincent de Paul Parish, and they have three children: Halie, Josh and Kara. Deacon Goldwire attributes his spiritual growth to spiritual direction at The Lanteri Center for Ignatian Spirituality, which helped him to grow in prayer and personal relationship with Christ.

The Lanteri Center “allowed me to grow in a relationship with Jesus, rather than just maintaining a heady theological understanding of Christ,” he told Denver Catholic. “Then through praying the Jesus Prayer, this relationship moved 18 inches from my head to an indwelling of my heart—perhaps the longest pilgrimage I’ve ever made!” Deacon Lanciotti, 57, is a native of Fort Collins, and he and his wife, Ruth, attend St. Elizabeth Ann Seton. They have been married 33 years and they have four children: Christopher, Elizabeth, Daniel and Maria. They also have two grandchildren. For Deacon Lanciotti, the call to the Diaconate began when he saw a deacon serve Mass for the first time.

“The first time that I saw a permanent deacon serving at Mass was when I moved to Colorado 28 years ago and observed Deacon Bill Trewartha,” he told Denver Catholic. “Watching Deacon Bill was when I first experienced a call to serve Christ as a deacon. I had very young children at that time, and so I did not follow through with this call until many years later when my children were older.

“Yet all that time I continued to pray, and the call to be a deacon became clearer and stronger.”

“Like Peter,” he continued, “I certainly do not feel worthy or able to be a servant of Christ, yet I believe that God will supply all the grace I need to follow His will.” Deacon Martinez, 55, is from Denver, and he and his wife, Gloria, attend Notre Dame Parish. They have three children (one son and two daughters), and four grandsons. Deacon Martinez has served his community as a police officer, and looks forward to serving now “in the most important way.” He credits Mary with bringing him closer to Jesus, and to the Diaconate.

When asked about the greatest spiritual influence his life, he said, “It was Jesus on the cross, just before He died, giving us a beautiful gift—His Mother. It was the Blessed Virgin Mary who guided me towards her Son’s stirring in my heart. She interceded for my wife through her cancer battle, she interceded to bring awareness to me by others example of living this great calling to serve our Church, the Body of Christ.” Deacon Nepil, 62, is from Highlands Ranch, CO, and will serve at Our Lady of Lourdes Parish. He and his wife, Mary, have three children: Father John (a priest of the Archdiocese of Denver), Stephen and Katie. They also have three grandchildren. A cradle Catholic, he was catapulted into taking his faith more seriously after watching his children grow in their spiritual lives.

“I’m a cradle Catholic,” he told Denver Catholic, “but when I saw that my children were passing me up on their conversions, spiritual development and prayer life, I suddenly realized that I needed to do something.

“Deacon Joe Donohoe worked at the same company as I did, and would regularly encourage me to consider the permanent diaconate. I, of course, always had a reason on why I could not do it—too busy, not smart enough, unworthy. During this time, however, I continued to feel the pull on my heart from the good Lord.”

“I am still unworthy of this call,” he continued, “but I am very excited to be ordained by Archbishop Aquila as a servant of Christ to serve the people in love and joy.” Deacon Perzinski, 39, is originally from Rock Springs, Wyoming. He and his wife, Amber, have six children: Sam, Katie, Grace, Andy, Bethany and John. He is grateful for the “blessing to be serving St. Michael the Archangel parish in Aurora.” His road to the Diaconate began when a deacon prepared him and his wife for the baptism of his oldest daughter.

“I distinctly recall initially getting the call to the diaconate as we were preparing for the baptism of our oldest daughter,” he told Denver Catholic, “and a permanent deacon prepared the class and ministered the sacrament. His service started me on the path to inquire into this Holy Order.” “Over the years, other deacons were assigned to the parish: all holy, devoted men with a strong presence of service to the parish,” he told Denver Catholic. “The parish has also been blessed with many holy priests who served our people well and set great examples for all to witness.

“St. John’s has been blessed with a considerable number of vocations to the priesthood, diaconate, religious life and missionaries. Our Lady of Guadalupe Adoration Chapel was completed in March 2014, and our parish groups faithfully pray for vocations. I am thankful to have the support of so many prayerful parishioners and look forward to serving as one of their deacons.”