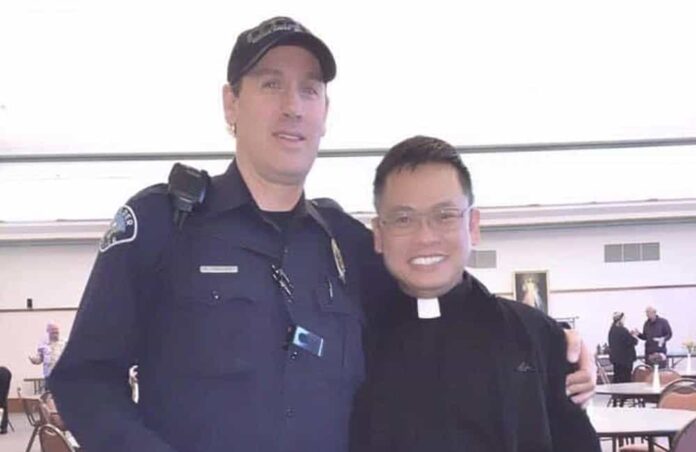 On March 22, 2021, 10 people were killed during a shooting at a King Soopers in Boulder, Colorado. The following is a statement from Archbishop Samuel J. Aquila:

“I am deeply saddened by the tragic and sudden deaths of 10 people yesterday afternoon in the shooting at a King Soopers in Boulder. I have been praying for all those impacted by this senseless act of violence and want to express my spiritual closeness to them.

Along with the rest of the community, we are waiting for more details on those who have passed away. We do know that Officer Eric Talley was Catholic, and has been described as a man of character and strong faith, a loving father to seven children, a husband who cared deeply for his family, and a soldier for Christ. My prayers and those of the faithful of the Archdiocese of Denver are with the Talley Family and all who have died.

We also know that Officer Talley regularly stopped by St. Martin de Porres in Boulder and participated in its events, even though he wasn’t a parishioner there.  For those unfamiliar with the area where the shooting occurred, St. Martin de Porres is just across the street from King Soopers. St. Martin de Porres, the patron of the parish, was someone who experienced tragedy and hardship in his life, and so, we ask for his intercession in these difficult circumstances, that God would bring good out of this great evil.

While we still do not know what led up to this terrible event, incidents like this have become far too common in our country and our state. We must work to promote deeper conversion of hearts so that our lives are characterized by the virtue of charity, which allows us to love God and our neighbor, strengthening the fabric of society and preventing senseless acts of violence such as this one.”

Officer Talley’s funeral to be livestreamed

A livestream will be available for anyone interested in viewing the Catholic funeral Mass for Officer Eric Talley on Monday, March 29, 2021 at 12 p.m. The Mass will be celebrated at the Cathedral Basilica of the Immaculate Conception in downtown Denver, and seating will be limited due to COVID restrictions. The family has requested that they not be shown during the livestream of the Mass, and media will be restricted from the Mass. The Mass will be a Solemn High Requiem Mass celebrated by Father Dan Nolan, FSSP, and other priests of the Priestly Fraternity of St. Peter. Archbishop Samuel J. Aquila will be in attendance.