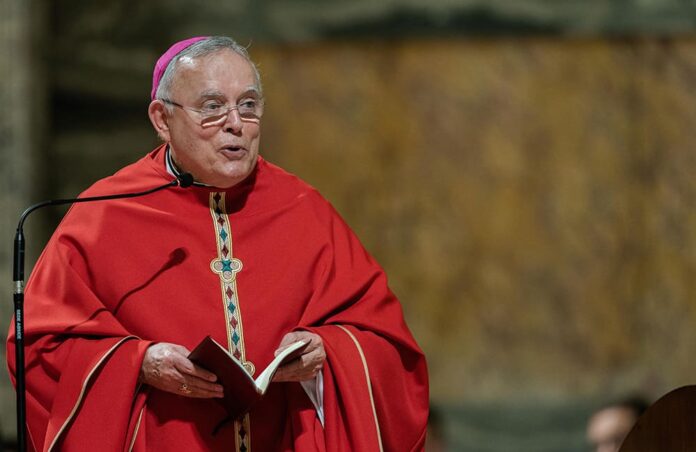 For Archbishop Samuel J. Aquila and many Colorado clergy and lay members, the deep influence that Archbishop Charles J. Chaput exerted during his time as Archbishop of Denver is still present in the many personal relationships he made and the numerous initiatives that came to fruition during his tenure. As his 31 years of episcopal service came to a close with his recent retirement, the image of the man who shepherded the Archdiocese of Denver from 1997 to 2011 can be best described by those who were closest to him.

“I am extraordinarily grateful to Archbishop Chaput for all the years of loving service and guidance he provided to the Archdiocese of Denver,” Archbishop Aquila said. “His deep faith and love for the Lord and for the Church was evident in all his decisions, and most especially in his decision to move forward with the establishment of St. John Vianney Seminary, to support so many of the lay apostolates, and to bring new religious orders to the archdiocese. As a priest, it was a joy to serve with him and work on so many different projects that furthered the new evangelization.”

“With his retirement as an archbishop, it’s only fitting that we pay tribute to his impact on the faithful of our archdiocese and the Church in the United States.”

Monsignor Thomas Fryar, pastor at St. Thomas More Parish, spent much time with, and served in various roles under, Archbishop Chaput. He especially admires the sense of fatherly presence the archbishop had to his flock, which was reflected by the fact that people knew they could often find him celebrating the Sunday evening Mass at the Cathedral.

“He would not only try to be available for them at Sunday Mass, but he would stay at the back of the church greeting people – and sometimes that would take almost as long as the mass,” he said.

By this simple gesture, he made a deep impact on the lives of numerous lay people, according to Eric Zellweger, current chair of the archdiocesan finance council. That was precisely how he met the prelate.

One Sunday after Mass at the Cathedral, when Zellweger was in his 20s, archbishop noticed he was new and invited him to lunch. “We ended up having lunch and playing racquetball,” Zellweger recalled.

Nonetheless, in spite of the archbishop reaching out to him, Zellweger said he was still lukewarm in his faith and fell away for a period of time. It would take a few years to recover his faith and contact Archbishop Chaput again.

Once he called the archbishop and told him his story, Zellweger said that the mercy and love he received from Chaput further increased his desire to grow closer to Christ.

“He’s very saint-like, very warm, open, and merciful – yet he never compromises the teachings of our faith,” Zellweger said. “That’s what really drew me to reach out to him. I felt that warmth, that truth and that beauty that he always conveys to everyone that he meets. He’s very authentic.”

Dr. Chavez also met the prelate after Sunday Mass at the Cathedral. They had a brief conversation about a trip Chavez would be making to Europe. Six months later, archbishop saw him again and said to him, “You’re back from your trip! What was your favorite part?”

For Dr. Chavez, the archbishop’s exceptional memory was a result of his “genuine interest in people,” a quality that impressed him.

One day after going out for breakfast and inviting him to the visit the seminary, the archbishop asked him if he had ever thought about the priesthood. To the archbishop’s surprise, Chavez told him he wasn’t Catholic – he attended  Mass because his girlfriend was a member of the cathedral choir.

“At that point, he took me to the [seminary chapel] and showed me the stained glass and explained the story to me. From that time forward, he started meeting with me on a biweekly basis and took me through the Catechism and Scripture and formed me in my faith,” Dr. Chavez recalled. “I was under spiritual direction with him for two to three years and cultivated a good friendship… Growing up I never had a father, so he became a lot like a father figure to me… He’s one of the best leaders I’ve ever met.”

Many of the priests who were seminarians during Archbishop Chaput’s time in Denver are also grateful for his closeness and fatherly care.

“I remember that fatherly leadership that he provided not only me, but so many others,” said Father Samuel Morehead, pastor at All Souls Parish, who spent his seminarian years under the archbishop. “I have memories of him coming to speak candidly, to lead the men in the seminary as a father, answering our questions, engaging us in meaningful dialogue.”

This openness was also evidenced by the fact that anybody could send him an email and receive a response “within record time,” the priest assured. “That really made you feel like he was in your life and engaging you.”

Among Archbishop Chaput’s great legacies as Archbishop of Denver, people will not hesitate to highlight the many apostolates and initiatives he supported and encouraged, some of which include the Augustine Institute, FOCUS, Endow and Centro San Juan Diego.

For Msgr. Fryar, Archbishop Chaput’s role in the growth of both Saint John Vianney and Redemptoris Mater seminaries was pivotal, and believes it became “a model in the whole United States [for] its strong formation presence.”

Father Morehead believes it was the work that Archbishop Chaput dedicated to the seminaries that advanced so many other apostolates in the archdiocese.

“[Some of these ministries] came to light because we had the right people here at the right time in the faculty at the seminary. It was a ripple effect of goodness,” he assured, a goodness that came from his disposition to the Holy Spirit.

“I was always inspired with his openness to trust in his work of the Holy Spirit to stir up holy initiatives in the life of the Church,” Father Morehead continued.

Archbishop Chaput’s work is thus fondly remembered by many people who were positively influenced by his “pastor’s touch,” “simplicity” and “courage.”

“He’s obviously a man of great conviction and confidence, but I think what might not come out so much in his public columns and in how he can be attacked… is his immense humility,” Zellweger said. “I remember him saying once to me: ‘People try to paint me as a conservative or a liberal based on my views… but I am just trying to teach the Gospel and live the Gospel authentically.’”

“As archbishop, I believe he was and is still a man of utter integrity. I believe he is honest and forthright, and passionately loves Jesus and his Church,” Father Morehead concluded. “And while being always a man of mercy, compassion and a good pastor to his people, I’ve also admired his ability to stand up for what he believes and knows to be the truth.”