An occasion worth celebrating 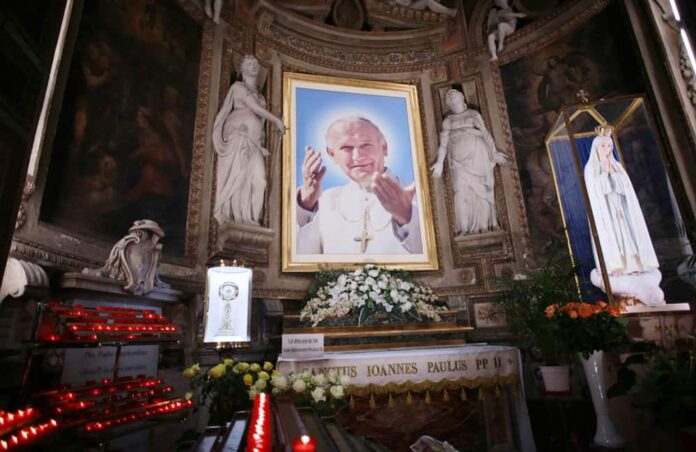 “Therefore, since we are surrounded by such a great cloud of witnesses, let us throw off everything that hinders and the sin that so easily entangles.”  Hebrews 12:1

I love being Catholic in November. I like to think of this as the month that the Church reminds us that we’re not alone. Those who went before us are still, in a very real way, with us. We can pray for them. And, once they have entered into glory, they can and do surround us and see us and pray for us.

We think of the saints, rightly, as role models. They have walked in our shoes. They’ve faced trial and temptation and suffering, just as we do, and they have finished the race.  But sometimes, we stop there. We can emulate them, we can ask them to pray for us. But the relationship is pretty one-sided. It’s us looking up to them — literally and figuratively.

But I have found that there’s a lot more to it. The saints want to do more than just passively wait for us. They want to be part of our lives. They want a much more direct, two-way relationship.

A couple of years ago, I told you the story about how my friend, the late Father Michael Scanlon, TOR, reached out in a very real, concrete way to let me know that he is praying for me. That incident was stunning in its clarity. It left me no doubt that he, although no longer in this world, is aware of and interested in what is happening in my life, and that through his prayers he has become an active participant.

This November, I want to tell you about a different and somewhat more subtle experience I had.

Everyone who knows me knows about the tremendous impact St. John Paul II had on me. His Theology of the Body quite literally derailed my life. After I discovered it during my senior year of college, I was determined to share its message as widely as I could. Which turned out to be far wider than I could have ever imagined. Instead of marrying and having children, I spent the next 20 years traveling around the world, speaking on the Holy Father’s vision of love and marriage. I earned a Master’s degree from the program he founded, the John Paul II Institute for Studies on Marriage and the Family. I wrote two books based on his message.

I never really met him during that time. We spoke at the same events a couple of times. But while I eagerly listened to every word of his addresses, he was not sitting in the audience during mine. I “met” him during a papal audience once, but he was very ill and it was kind of a “department store Santa Claus” set up where we had our pictures taken with him, but no real introduction or conversation happened. I was told at one point that he knew who I was and was familiar with my work. But that’s about as close as we ever got.

Nine years after his death, I traveled to Rome for his canonization. The way that trip came about was really nothing short of miraculous and gave me the distinct impression that “somebody” wanted me there.

While in Rome, I was praying one day at the church of Santo Spirito, the Divine Mercy shrine. It’s a beautiful place, with a side chapel with a large, beautiful picture of St. John Paul II. While I was praying there, I suddenly had what I can only describe as an awareness of his presence. I felt, as strongly as ever, my love for this man who so beautifully radiated Christ. And I heard, in my heart, his deep Polish voice saying “Now I choose you.” I knew, I just knew, that he was telling me that he knew me, and that he was choosing me to be his spiritual daughter — to pray for me, and to help lead me to Christ.

I wept. A lot. It was beautiful.

Could it have been my imagination? Sure. But I don’t think so. And even it if was, I know what St. Paul told us — that our departed brothers and sisters in Heaven are not far from us. They surround us. And thus, the man who influenced my life so profoundly is still real and still present and active in the world, and in my life.

This is not just about me. He influenced thousands of us — perhaps tens or hundreds of thousands. I’m sure many others have had similar experiences, and many others would if they remained silent long enough to hear him

All of us who were touched by his life are his spiritual children, and they are my spiritual siblings.

And what do we do when we’re family? We celebrate important milestones together, of course. And there’s a big one coming up. My spiritual father’s birthday is coming up. St. John Paul II was born on May 20th, 1920. Next year will be his big 1-0-0. And I want to celebrate it. With all of you.

I will be leading a pilgrimage to Poland, “In the Footsteps of St. John Paul II,” next May. We will visit the major sites of his life, and those of other Polish saints like Maximilian Kolbe and St. Faustina. And, best of all, will be in Krakow, the center of so much of St. JPII’s life in Poland, on the date of his 100th birthday.

I cannot begin to tell you how excited I am. This is a once in a lifetime opportunity. For me, and for everybody who loved him.

I would very much like you to join me. If you’d like to learn more, go to https://rtijourneys.com/in-the-footsteps-of-st-john-paul-ii.

Because family should be together on special occasions.