His Church. Our Experience.
Subscribe
HomeLocal‘Ambitious’ capital campaign to shape Church’s future in Fort Collins and beyond
LocalParish News 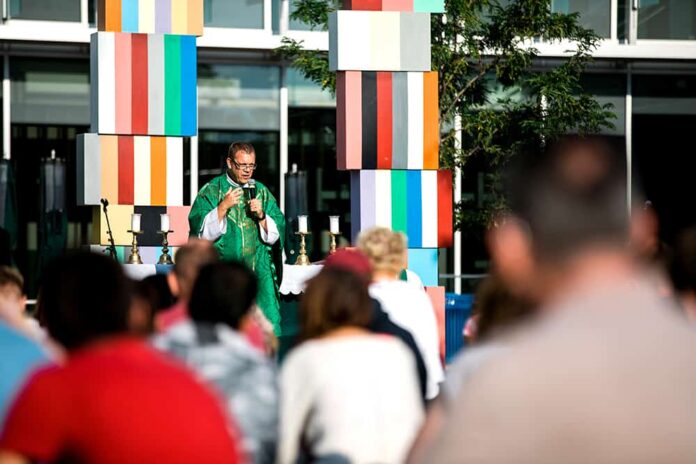 During his first year of theology in the seminary, Father Rocco Porter was gifted with a special task during Pope John Paul II’s visit to Denver for World Youth Day.

“I held his prayer book all the way through the Mass,” he said. “It was an extraordinary experience just to be that close to him, to be in the same place with him, but then to be standing right in front of him for the majority of the Mass.”

The 1993 Cherry Creek Mass celebrated by the now-saint was unlike anything Father Porter had ever witnessed, especially since he looked up to Pope John Paul II so much.

“I knew at that point that whole experience was going to shape my priesthood,” he said.

What the young seminarian didn’t know at the time was the influence the pope’s visit would have on his future assignment as a priest.

Father Porter is the pastor of St. John XXIII in Fort Collins, where many of the Catholics involved in the parish are students at Colorado State University.

Equipped with FOCUS missionaries and a campus ministry called Ram Catholic, St. John has been successful at nurturing the faith of young adults at CSU. But parish staff members haven’t shaken the message Pope John Paul II left for the Catholic Church during his visit to Denver, and it’s prompted them to desire more.

“Twenty-six years later, as the Catholic faithful we look at all the crises inside the Church worldwide, and we have to wonder, what did this pope know?” said Luke Hecker, Capital Campaign Manager at St. John.

“How prophetic that he could see the Church would be in such turmoil as he was planting the seeds of the New Evangelization in Denver, Colorado.”

To participate more deeply in that movement, the team at St. John created the “Undeniable Presence” capital campaign — a five-year project that will shape the future of countless CSU students.

“This is a very, very ambitious capital campaign,” said Hecker.

It’s so ambitious that when Father Porter first presented it to the Archdiocese of Denver, “they pretty much laughed at me and said, ‘This is great. Do you think you’re going to be able to do this?’” said Father Porter.

The $31 million project accounts for a new church, Newman center, parish hall and parking structure — a campus situated on the western edge of CSU.

This is largely possible because of Tom Gleason, a Fort Collins Catholic who donated several acres of land to the parish in the 1960s. Initially, the parish planned on selling some of that land in order to use the funds to buy a gas station lot that was out of business.

Although they were able to purchase the lot as part of the project, they were also able to keep the land by entering into a 99-year lease agreement with Blackbird Investments, a Catholic developer that has also agreed to include Catholic student housing on the campus property.

“I thought at first it was a scam,” said Father Porter.

But it wasn’t, and because of the parish’s partnership with Blackbird, the balance left over for St. John is only $8.6 million.

“Only God could take a $31 million project and bring in a benevolent Catholic developer and commit $22.4 million before we ever got a shovel in the ground,” said Hecker. “I think it’s miraculous.

“What we are recognizing is that truly, this project is part of the prophecy of St. John Paul the Great and his pilgrimage to Colorado in 1993 for World Youth Day.”

For Adam Hermanson, architect for the project, the beauty of the new church will serve as a key part of the late pope’s mission.

“Embodying the permanence of the faith, lifting our eyes to heaven, drawing us into the intimacy of the Eucharist, and forming us for mission — this new church will be a tremendous launch pad for the new evangelization,” said Hermanson.

According to Hermanson, it’s the details in the construction that will draw students in to practice and share their faith.

“The large stained-glass window extending high above the altar will serve as a beacon to the neighborhood, visible far across the university campus,” he said.

Ultimately, the design, particularly of the interior of the church, “will be focused on the altar, the tabernacle and the baldachin that marks the center of the sacred space,” said Hermanson.

The fruits of Ram Catholic are never as evident for Father Porter as when he walks out of the church and onto CSU’s campus.

“The students who are part of campus ministry are happy, joyful and excited,” he said. “Then you walk on campus and you realize there’s so many more students who don’t know Jesus Christ.

“There’s sadness and isolation. Everyone’s walking around with headphones on and nobody’s saying ‘hello’ to anyone. There’s a lack of joy,” said Father Porter. “We need to change the culture of our campuses. They’re missing out on a joy that God wants them to have and they don’t even know it.”

Creating a greater Catholic presence has the potential to change the hearts of young people from all walks of life.

“Those students need to see the church,” said Father Porter, “and they need to see a building that’s going to inspire them to want to go inside and meet the Lord.”

According to Father Porter, there’s around 6,000 to 8,000 Catholics at CSU, and Ram Catholic is able to reach around 1,500 of them. This campaign will help the parish extend its opportunities to grow in faith to many more.

St. John hopes to have all pledges in by June or July of this year, to break ground in early 2020 and complete the whole construction project by the beginning of the school year in 2021.

The parish’s staff remains in awe of the campaign’s continued success, especially at this time in the Church’s history.

“I thought this last crisis was going to hurt the ministry,” said Father Porter. “[But] it’s bringing students to the ministry. I think people are seeing the tremendous battle.

“I think they took that as this isn’t a time to abandon the Church — this is a time to take over the Church, renew the Church, be in this battle and help God purify the Church.”

This project is a testament to that desire.

“The Catholic Church has reason for hope again,” said Father Porter. “I really think that God is probably using this project, and he’ll continue to use others, to really build up his Church again because the Church is in such disarray right now.

“It’s going through some very dark times. I think it gives something for Catholics to get behind and to rebuild God’s Church to what it needs to be.”