His Church. Our Experience.
Subscribe
HomeLocalAge of mercy
Local 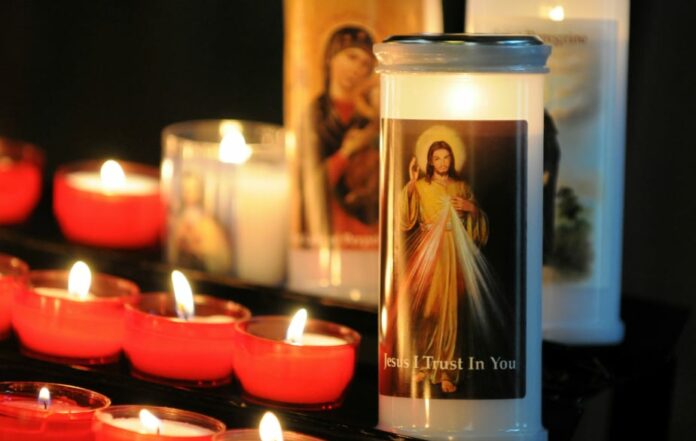 On Easter Sunday millions of Catholics gather with family and friends to celebrate the day when Christ conquered death and rose from the dead.

But that’s not the end of the story.

The understanding of Christian life reaches completion on Divine Mercy Sunday, held a week after Easter Sunday, when faithful are reminded of the mercy afforded to them by Christ’s resurrection, explained Father Marcus Marek, pastor of St. Joseph Polish Parish.

“As Catholics, we stress that after Good Friday there’s Easter Sunday when we recognize the resurrection,” Father Marek said. “With Divine Mercy, it is like one complete message. Through Christ’s cross and resurrection we have mercy coming into this world for us.”

In a spiritually-rich convergence of mercy, Divine Mercy Sunday this year also marks the 10-year anniversary of St. John Paul II’s death—which occurred on the vigil of Divine Mercy April 2, 2005—and without whom the feast would not be recognized today. The devotion of divine mercy was relayed by a Polish nun the late pope canonized before his death, St. Maria Faustina Kowalska, who shared the message that Christ’s love and mercy are stronger than sin.

Mercy will reach an important juncture this year when the Vatican will officially proclaim a Year of Mercy April 12, starting Dec. 8 and concluding Nov. 20, 2016. Pope Francis announced the need for Christians to be a witness to mercy.

“This is the time of mercy. It is important that the lay faithful live it and bring it into different social environments,” he said on March 13. “I am convinced that the whole Church will find in this Jubilee the joy needed to rediscover and make fruitful the mercy of God, with which all of us are called to give consolation to every man and woman of our time.”

St. Joseph Polish and several other parishes will recognize Divine Mercy Sunday with prayers and celebrations, including veneration of the two saints that brought the message to modern man.

The story of mercy is found in the beginning of time when in Genesis God gave Adam and Eve a promise of mercy, a prophetic foreshadowing of the Savior who was to come. Acts of mercy continue through the Bible and are realized in Christ’s resurrection from death.

Modern man came to know Christ’s mercy centuries later with the young nun Sister Faustina, who lived in Poland during the 1930s. The extraordinary revelations she received from Christ as recorded in notebooks are known today as the “Diary of Saint Maria Faustina Kowalska.” Through her writings, she shared that faithful must trust in his mercy and extend it to others so all may share in his joy.

St. Faustina wrote that Christ said to her, “I promise that the soul that will venerate (the Sacred Heart) image will not perish. I also promise victory over its enemies already here on earth, especially at the hour of death. I myself will defend it as my own glory.”

About his time, St. John Paul II was growing up in Crakow where Sister Faustina lived. The young pope was 18 years old when she died.

“He likely walked the same streets St. Faustina did before him,” Father Marek said.

News of the nun’s revelations spread and a great movement was sparked that ignited a focus on Christ’s mercy.

Years later in 2000, St. John Paul II canonized Sister Faustina making her the “first saint of the new millennium,” also calling her the “great apostle of Divine Mercy in our time.” On the same day he established Divine Mercy Sunday as a feast for the entire Church. Faithful recite the chaplet, asking for an ocean of mercy to fall upon the world.

Today, faithful remember the convergence of mercy depicted in the image of the Sacred Heart of Jesus, shown with rays emanating from his heart.

>> Learn how to pray the chaplet here.

“A lot of people come to the Cathedral looking for mercy. It seems to me the mother church should be that place where people who find their lives in dishevelment can be embraced. And Divine Mercy is about that.”
—Msgr. Bernie Schmitz, pastor of the Cathedral Basilica

“(St. John Paul II) was very instrumental in bringing Divine Mercy to the whole world. Divine Mercy is not just for the Polish. It’s not even just for Catholics. It’s for everyone.”
—Father Marcus Marek, pastor of St. Joseph Polish

“The Church must be a place of mercy freely given, where everyone can feel welcomed, loved, forgiven and encouraged to live the good life of the Gospel.”
—Nov. 24, 2013 in Evangelii Gaudium

“I am always struck when I reread the parable of the merciful Father. … God is always waiting for us, He never grows tired. Jesus shows us this merciful patience of God so that we can regain confidence and hope—always!
—April 7, 2013, homily

“I think we too are the people who, on the one hand, want to listen to Jesus, but on the other hand, at times, like to find a stick to beat others with, to condemn others. And Jesus has this message for us: mercy. I think—and I say it with humility—that this is the Lord’s most powerful message: mercy.
—March 17, 2013, homily

“There is no limit to the divine mercy, which is offered to everyone … The Lord is always ready to roll away the tombstone of our sins, which separate us from Him, the light of the living.”
—April 6, 2014, Sunday Angelus