His Church. Our Experience.
Subscribe
HomeLocalAbove all, a pilgrim
Local

Above all, a pilgrim 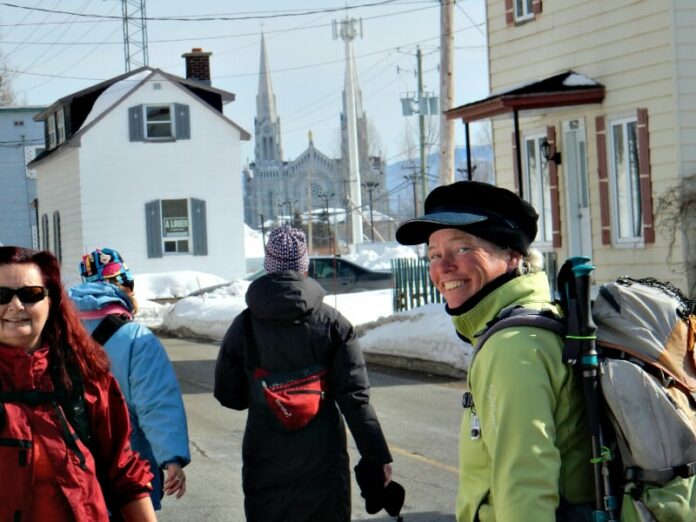 St. Therese once reminded the Church, “The world’s thy ship, and not thy home.” In that sentence, she summarized the Church’s understanding of itself as a pilgrim, a traveler on its way to a holy place.

Ann Sieben exemplified this understanding on Easter Sunday, when she walked over the threshold of St. Anne de Beaupre shrine in Quebec. The Basilica at the shrine is a testament to beauty, with a Notre-Dame-esque facade enclosing a mass of stained glass windows, mosaic and carvings.

A site to behold on any day, it must be especially intimidating in its Easter finery. Sieben entered it in the same clothes she had worn for the past four months. The people there were expecting her, and greeted her with joy.

Sieben is a mendicant, pilgrim, meaning her entire life is dedicated to pilgrimage. She carries only a small backpack with her on her journeys. It contains only the following: a pair of sandals, a blanket, a small bag of toiletries, her Bible, papers identifying her as a pilgrim, her Bible, and some weather specific gear.

She said she does not carry a phone, camera or money. She simply walks toward a holy site until she encounters people, at which point she will ask for a place to stay for the night. She said she has never had to spend the night outside.

Sieben was first exposed to the concept of pilgrimage through her grandmother, who would often take bus trips to the shrine of St. Anne de Beaupre, for whom Sieben is named. However, Sieben said she didn’t understand the deeper meaning of pilgrimage until she was an adult.

The concept of pilgrimage, or a journey to a holy site, has existed nearly as long as religion. Christ himself journeyed to Jerusalem with his parents and later, his disciples. Members of the early Church would travel to visit the shrines of apostles and martyrs. They would eventually build shrines in their honor across the known lands of Christendom. As Christianity spread, pilgrims established routes across Europe, India, Africa, and the Holy Land.

Sieben was connected to one of these ancient pilgrimage routes while living in Europe.

“10 years ago, I was living and working in Europe. In Europe, they have a cultural tradition that after you’ve been working for 20 years, you take a year’s sabbatical. Pilgrimage, especially through the Camino [de Santiago] in Spain is well known,” Sieben said.

She decided to walk the Camino de Santiago in Spain for 11 days until she reached the shrine of the Apostle St. James in the Cathedral of Santiago de Compostela. She found the pilgrimage to her liking, and decided to go on another. And another. Having no family to hurry back to, she began embrace life as a pilgrim.

“At the end of [the second pilgrimage], I decided I was in no hurry to go back and work,” Sieben said. “I decided I liked it, and I have no family or commitments of any kind, so instead of going back and renewing my career, I went on another pilgrimage.”

Sieben’s attraction to the pilgrim life is not an anomaly in the history of the Church. In fact, this idea of pilgrimage is written into the very DNA of Catholicism. Apologists have understood for ages that the Church is a people journeying to their final home, Heaven. The Catechism also teaches that every visible church and holy place is a reminder of our common pilgrimage.

“Our visible churches, holy places, are images of that holy city, the heavenly Jerusalem, toward which we are making our way on pilgrimage,” paragraph 1198 states.

This idea is threaded throughout the documents of Vatican II. Pope St. John Paul II even reflected extensively on Mary’s role as the first Christian pilgrim in his encyclical Redemptoris Mater.

“As the People of God, the Church makes her pilgrim way towards eternity through faith, in the midst of all the peoples and nations, beginning from the day of Pentecost,” he wrote. “[Mary’s] exceptional pilgrimage of faith represents a constant point of reference for the Church, for individuals and for communities, for peoples and nations and, in a sense, for all humanity.”

Sieben admits that her first two pilgrimages were done more for the sake of curiosity than piety. She enjoyed the thrill of meeting individuals from all over the world, and relying on people’s generosity to meet her basic needs for food, shelter and water. However, she said that her understanding of pilgrimage has developed along with her skill set. She said that at the heart of her understanding of pilgrimage is Jesus’ commandment to “love thy neighbor as thyself.”

“Jesus made two things clear: Love God above all else, and love your neighbor as yourself,” Sieben said.  “Someone’s got to make the effort to go and meet the neighbors of the world.”

Her experience meeting those neighbors has led to everywhere from the tombs of the Apostles to Northern Africa during the Arab Spring. She’s even come across armed men in South American jungles while walking from Buenos Aires to Mexico City.

“They were always so shocked they would just greet me with great response,” she says, with the same amount of concern one might assign to being stopped by a Jehovah’s Witness at Wal-Mart.

She said that she never knows who she will meet–or where she will sleep–during these journeys. She also does not know where the conversation will go, but says she enjoys discovering this.

“I’m not out to evangelize. I’m not even out to bring peace, because that will quickly become political. But trust is trust, and trust between people is trust. Trust is something I go out to actively build and people really are very helpful to me. Every reaction I get is different and unpredictable. Sometimes it’s really a life-changing moment for the people I encounter. I just go with it. I don’t have an agenda,” she said.  “I just smile and ask for help and it always starts a conversation.”

Sieben spent several years walking established pilgrimage routes along the world, including a trek from Europe to Jerusalem that took her through Libya and Syria during the Arab Spring. “It was a chance I took and succeeded,” she says in her matter-of-fact style. However, she began to think she should explore the idea of doing her pilgrimages in the United States.

“People kept saying that of course I could do a pilgrimage like that in Europe, but I could never do that in the Americas. So I went from Denver to Mexico City,” Sieben said.

That pilgrimage took her across Mexican deserts, with a final destination at the Shrine of Our Lady of Guadalupe in Mexico City. She found that strangers were just as willing to provide water as shelter. However, Sieben wasn’t done proving the possibility of pilgrimage in the Americas.

North America does not have famous, established pilgrimage routes like countries with millennia of Catholic history. However, there are least three established routes here, with more being developed right now.

Sieben decided to explore one of these routes by spending the winter walking from Denver to Quebec, reaching the Cathedral of St. Anne de Beaupre on Easter Sunday. She said that while her introduction to pilgrim life took place on established routes, she now enjoys being a pioneer pilgrim on the American trails.

“You don’t have to fly to Spain to be a pilgrim. You’ll have a lot more fun if you don’t… [The Camino de Santiago] is so commercialized. You can have a good time, of course, but it’s not such an authentic experience,” Sieben said.

In fact, she says her own faith grew as she became a much simpler pilgrim. She said it went from “low-tech tourism” to prayerful pilgrimage. “Every pilgrimage, I’ve learned my skills and honed them. It’s gone from being a tourist-y experience to being a faith-based and faith-filled pilgrimage,” Sieben said.

Sieben is so dedicated to the concept of accessible pilgrimages, she’s even created a group to help promote them. The Society of Servant Pilgrims teaches that anyone can be a pilgrim. It often partners with the Denver-based Creatio to help groups plan pilgrimages.

“It doesn’t have to be the extreme pilgrimage like I do. Mostly, [pilgrimages] are very organized and cultural and historical and spiritual,” Sieben said. “A pilgrimage can just be for a long weekend…You can even be a posh pilgrim.” (She defines “posh” as not sleeping on a parish hall floor).

Whether one begs for money and shelter the whole way, or decides to include some comforts, Sieben said one thing unites all Christian pilgrims.

“A pilgrim must have a destination,” she said.

That can be Mother Cabrini Shrine, or even the tomb of an apostle. But every Christian has a final destination in common: Heaven.