A tale of two Georges 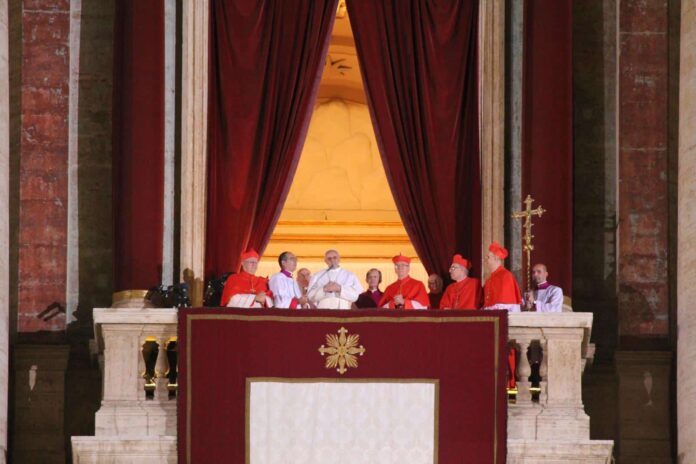 When a pope is elected, the cardinals who have just chosen him make their way to the Hall of Benedictions atop the narthex of St. Peter’s Basilica. It’s a challenging journey for some: In 2005, the frail, 79-year old Cardinal William Baum was carried out of the Sistine Chapel, through the basilica, and up to the Hall of Benedictions by his conclavist-secretary, Msgr. Bart Smith, doing a fair imitation of Aeneas toting Anchises out of Troy as sculpted by Gianlorenzo Bernini.

As the new pontiff is presented, the cardinals appear at the windows flanking the central loggia of the basilica; there, they receive the first papal blessing with the crowd in St. Peter’s Square. On March 13, 2013, two cardinals remained behind for a few moments, alone in a window after Pope Francis retired for the night. They seemed pensive, these experienced, thoughtful, and prayerful men, both of whom had worked hard to reform troubled dioceses. The Church had just experienced an unprecedented form of papal abdication; the conclave had resolved itself quickly in favor of a candidate unfamiliar to many electors; what was coming next?

One of those men was the archbishop of Chicago, Cardinal Francis George, OMI, who died in 2015. The other was his friend and ally, Cardinal George Pell, then the archbishop of Sydney, later the Vatican’s chief financial officer. Some years before, Cardinal George had shocked the priests of Chicago by suggesting, almost offhandedly, that while he would die in his bed, his successor would die in jail and that man’s successor would be executed in the public square – after which the martyr’s successor would, as the Church had done so often in the past, help pick up the fragments of a broken civilization and start again. It seems unlikely that, on the night of March 13, 2013, Cardinal George imagined that his hypothetical scenario would be dramatically accelerated, the only difference being that the friend beside him would be the one in jail. And Cardinal Pell would be in prison, not for the defense of life or religious freedom, but because of a wickedly perverse conviction on uncorroborated charges of sexual abuse that a jury had been shown could not possibly have happened.

There are, as sociologist Peter Rossi used to say, many ironies in the fire.

We may hope and we should pray – intensely – that Cardinal Pell’s conviction is reversed on appeal. If it is not, the innocent cardinal will become a prison evangelist and a witness to Christ behind bars. Australian justice, on the other hand will have suffered a devastating blow from which it will take a long time to recover. And reasonable people will wonder whether it is safe to do business or travel in a country where a fever-swamp media and secularist bigots have the capacity to distort the legal process into a grotesque parody of democratic maturity.

But even if the appeal is successful – as it should be on any rational grounds, and if the words “beyond a reasonable doubt” mean anything in Australian courts – the assault on the Church and its leaders will continue. The issue of clerical sexual abuse has been weaponized. And that weapon is being used, not to deal with abominable sins and crimes that cry out to heaven, but to settle all sorts of other scores, ecclesiastical, political, and, in Pell’s case, financial, given the corrupt practices the cardinal was exposing.

The acceleration of Cardinal George’s prediction of cardinals-in-jail should also give pause to those who blame the abuse crisis on “clericalism.” Clericalism – the evil misuse of the respect those in Holy Orders rightly enjoy because of their sacred office – facilitates abuse; it doesn’t cause it. Like the charge of abuse, the “clericalism” trope has been weaponized by the Church’s enemies, to the point where it is becoming difficult for any Catholic cleric charged with misconduct to receive a fair hearing or a fair trial. The vicious public atmosphere on display in Australia whenever the words “George Pell” are spoken is not improved by senior churchmen, in Rome and elsewhere, blaming abuse on “clericalism.”

From his present station in the Communion of Saints, I have no doubt that Francis George is interceding for George Pell, and for the vindication of justice by the judges who will hear the Australian cardinal’s appeal – even as the American cardinal regrets how prescient he was.