A sister in Tanzania 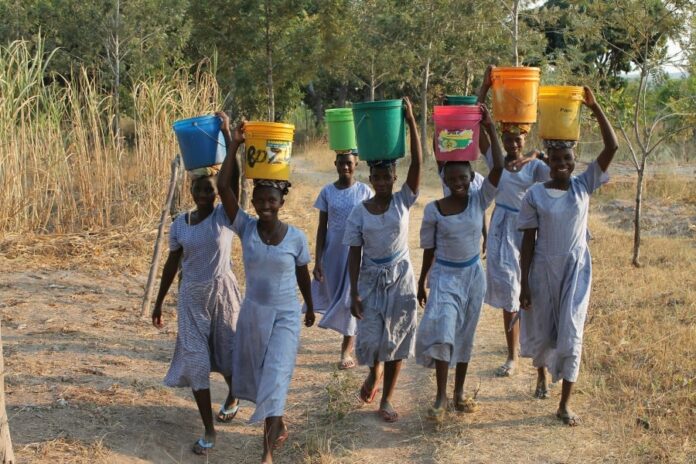 The ministry of Immaculate Heart of Mary parish in Northglenn extends far to the other side of the globe; namely, a small village in Tanzania called Nyantakubwa, where their sister parish, Christ the King, resides.

This relationship also eventually led to the assignment of Father John Ludanha as parochial vicar to St. John the Evangelist parish in Loveland. Father Spahn was actually present at Father Ludanha’s priestly ordination in Tanzania the first time he went over there, and as a result, had a hand in getting Father Ludanha his first assignment as a priest in Denver when it was time for Father Bulala to return to his home diocese.

Father Ludanha is now a man of two worlds, being born and raised in Nyantakubwa and having lived in America for the past seven years, and he can attest first-hand what it means to the people of Nyantakubwa for Americans to come visit and help them.

“[The people] know America from the media, how great it is, how wonderful it is, how everything is available, and for someone to take interest to go down there and live with them, just to share that experience, it’s like the incarnation in some ways,” Father Ludanha said.

“We both help each other,” Father Spahn said. “The sister parish over there prays for [Immaculate Heart of Mary] and the Archdiocese of Denver all the time, and we pray for them. We’re brothers and sisters in the Lord. We [also] help them with something that they really need our help with, and that’s finances. There are things they really couldn’t do without us, and our dollar goes so far down there. A dollar there makes a big difference.”

Christ the King’s parish territory includes 29 outstations where the villagers live and a girls’ school located next to the parish. Due to the harsh terrain and distance between the outstations, the girls live at the school. Immaculate Heart of Mary helped to fund the construction of the girls’ school, which Father Spahn is very proud of.

“Women are very subservient to men in African society and culture, so to empower them through education is really a wonderful thing,” he said.

Father Spahn has taken staff and parishioners from Immaculate Heart of Mary down to visit Christ the King each year for the past three years. The purpose of their trips is three-fold: to check on the status of various projects that funds raised by Immaculate Heart of Mary are going toward, to visit with Christ the King pastor Father George Nkombolwa as well as the parishioners and girls at the school, and lastly, to assess any future needs.

Future projects include building an administrative building for the teachers of the girls’ school that will double as a library, and also building a pump house by Lake Victoria to pump water to the school, parish and village.

More recently, funds raised by Immaculate Heart of Mary went to building new dormitories and classrooms for the girls’ school, as well as getting Father Nkombolwa a new pickup truck, which is an absolute necessity for him to have while traveling about the harsh terrains of Africa.

“It’s so important that he has a pickup truck because the roads are very bad during the rainy season,” Father Spahn said. “To get around, you need that four-wheel drive.”

Part of what Father Nkombolwa does as pastor of Christ the King is travel around to the different outstations to say Mass for the people and hear confessions. Part of the Mass is, of course, the offertory, and Father Ludanha noted that the offertory over there is much different than at a typical Mass here in the U.S.

“When [Father Nkombolwa] goes to the different outstations, people give what they have,” he said. In addition to rice and beans, Father Ludanha said,“Some will give chickens and some will give goats, so it’s good to have a pickup that you can put things in.”

Father Spahn continued, “He puts all of that in the back of his pickup, brings it back to parish, and he has a little storehouse where he puts all of this. That’s what he lives off of, and he feeds the girls at the school with the supplies that come from the people at the outstations.”

Though the people of Nyantakubwa don’t have much, Father Spahn said they exhibit, in many ways, a happiness and joy that is infectious.

“It is really infectious when you’re around people who have a love for the Lord that just radiates from them,” he said. “It’s attractive, it’s like a moth to a flame, and you want to be around that.”

Father Spahn explained that Masses are huge events for the people that last as long as seven hours and end up being an entire day’s celebration. He said that the enthusiasm and fervor for the faith can be seen in the way the people dress when they come to Mass.

“The people, when they come to Mass, show up in the best clothing they own,” Father Spahn said. “Why? Because they’re coming to Mass. What could be more important? They’re giving God their best. It speaks volumes about what’s in [their] minds and hearts.”

To learn more about Christ the King and the work that Father James and Immaculate Heart of Mary are doing in Tanzania, there will be a presentation and Q&A session on September 14th at 6:30 p.m. in the parish hall.