I recently visited the Denver Art Museum to see the Degas: A Passion for Perfection exhibit, which runs until May 20th. My kindergartener summed up the thematic content: “Horses and dancing girls.” With this inspiration, Degas’ genius spanned an array of materials — graphite, charcoal, ink, pastel, paints, and sculpture — as well as a spectrum of vision, from rough sketches and undefined abstraction to unexpected color and precision of line (sometimes in the same piece). Following from his study of classical artists, Degas developed new techniques to explore the contours of modern life.

As Catholics, we have abundant opportunities to enter into the beauty of our faith through art — old and new. Here are some recent books to guide us on a pilgrimage of the arts.

Painting serves as a good entry point into the Catholic arts 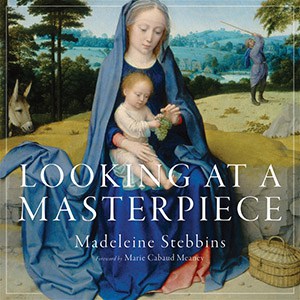 and Madeline Stebbins’ Looking at a Masterpiece (Emmaus, 2017) provides not only over 40 paintings, but also guides us in how to understand them. It is a large book, which reproduces the paintings in beautiful fashion. Chapter 19, “A Beautiful Journey,” features Francesco Botticini’s “The Three Archangels with Tobias (c. 1470) and typifies the pilgrimage through the arts, as we imitate Tobias in being led by the hand through a journey of beauty, drawing us more deeply to God. 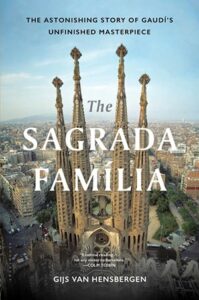 modern church with his The Sagrada Familia: The Astonishing Story of Gaudi’s Unfinished Masterpiece (Bloomsbury, 2017). Hensbergen describes the complexity and paradoxes of the church and its architect, Antoni Gaudí, whose cause for canonization has been opened. Sagrada Familia, a shrine to the Holy Family, is thoroughly modern and even surrealist, while conveying a truly transcendent and beautiful vision.

Anthony Esolen offers us not simply a theoretical overview of great Christian hymns, but a guide through 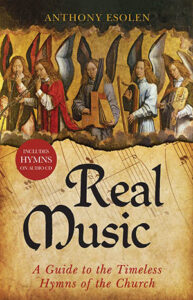 these hymns, with an accompanying CD, in his Real Music: A Guide to the Timeless Hymns of the Church (TAN, 2016). He arranges the book’s chapters based on major themes, such as the psalms, major events of salvation, the Holy Spirit, and the Eucharist. This beautiful guide could help Catholic singing to come alive again, both in the home and in parishes.

The reading and memorization of poetry were common 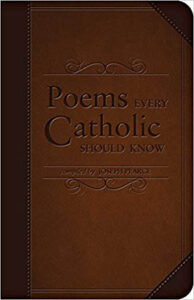 practices not too long ago. Joseph Pearce hopes to get us reading beautiful, classic poems again with his Poems Every Catholic Should Know (TAN, 2016). He includes the poetry of some great saints, such as Francis, Gertrude, and Robert Southwell, Catholic artists such as Dante, Chaucer, and Hopkins, as well as other great writers of the English language. In Pearce’s own contribution, he describes the Christian poetic spirit, responding the presence of God: “Thus transfixed / in transient transfiguration, / the impression / of mind’s gaze / becomes expression / and finds praise” (282).

College, has founded a new Catholic press to publish both classic and contemporary works of Catholic fiction, Wiseblood Books. An accomplished writer himself, he recently released a collection of short stories, This Our Exile (Angelico, 2017). In the line of Flannery O’Connor, Hren uses the violent afflictions of our culture to contemplate our pilgrimage through this place of exile, hoping to arrest us into a greater awareness of life’s underlying spiritual realities.

When people ask me what great classic of literature they 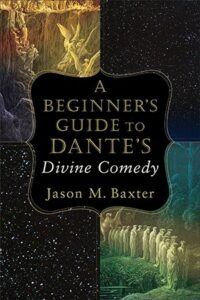 should read first, without hesitation I answer: Dante’s Divine Comedy (though it helps to read Virgil first). Wyoming Catholic College professor Jason Baxter offers an entry point into the work with his A Beginner’s Guide to Dante’s Divine Comedy (Baker, 2018). Baxter offers a wonderful introduction to Dante and a section by section commentary, taking the reader through Dante’s own journey through the afterlife, woven deeply with the poet’s own experience of Tuscan culture. Just as Virgil and Beatrice guided Dante, so some extra support helps to catch the Divine Comedy’s historical and spiritual references.

The United States has a richer Catholic culture than we might expect at first, with the Spanish settling many parts of the South and West, the French in the Great Lakes Region and Louisiana, and English Catholics in Maryland. We can experience firsthand the great heritage left behind by these Catholic settlers by going on pilgrimage! Santa Fe, N.M., offers many amazing treasures, as well as the beautifully situated missions of California. For a vade mecum while visiting these missions, see Stephen Binz’ Saint Junipero Serra’s Camino: A Pilgrimage Guide to California Missions (Franciscan Media, 2017). You can also come with me to the Louvre on my Saints, Monks, and Beer pilgrimage this October (rtijourneys.com).

The great heritage of Catholic art should shape our imaginations, anchoring us in God’s truth, goodness, and beauty during our pilgrimage to his heavenly city.

COMING UP: Mounting evidence for the Shroud of Turin’s authenticity

On Easter Sunday, one of the possible Gospel readings described how Peter and John found the empty tomb. It also described the first sight of Jesus’ burial shroud:

The cloths must have been amazing if they caused John to believe in the Resurrection!

Many Catholics have held the Shroud of Turin to be the main linen burial cloth discovered by the disciples in the tomb. Then the Shroud was carbon dated in 1988 by three different labs. The test showed the linen to date from 1260–1390 AD, seeming to prove the Shroud a medieval fake! Since then, however, researchers have uncovered overwhelming evidence pointing to the Shroud’s authenticity.

Colorado is home to the Turin Shroud Research Center in Colorado Springs, which is leading the way in compiling the mounting evidence. The Center, under the direction of the physicist Dr. John Jackson, has been researching the Shroud for 50 years, including as part of the study in 1978, STURP, which had unique access to the Shroud. A recently updated book by Dr. Jackson, The Shroud of Turin: A Critical Summary of Observations, Data, and Hypotheses (CMJ Marian Publishers, 2017, or online with limited images) provides an overview of where research on the Shroud stands today.

Here is a brief summary of some major points pointing to the Shroud’s authenticity:

We now know enough about the shroud’s history to show it predates the 14th century.

Historical accounts follow a miraculous full body image of the Shroud from Antioch, to the region of Cilicia (in modern day Turkey) to Constantinople, where it was kept hidden by the Byzantine Emperors for centuries. It was publicly displayed in Constantinople shortly before the Crusaders arrived and it seems that one of the leading Crusaders brought it back to France, where it remained privately until its first public display in Lirey, France in the 1350s. After suffering from fire, it was entrusted to the royal family of Savoy, who brought it to its current location in Turin, Italy (see pages 7-43).

2. Its Material and What’s Attached to It

No medieval examples of the herringbone stitch used to make the Shroud’s linen have been uncovered, though there are ancient matches from the Near East. Even more intriguing is the dirt found on the Shroud (especially surrounded the nose, knees, and feet), which match dirt and stone found in other tombs in and near Jerusalem. Likewise, pollen from plants of the Jerusalem area blooming in March and April has been discovered, along with pollen matching the historical record of the Shroud in Turkey, France, and Italy.

3. How the Image Was Made

Dr. Jackson lists a number of theories, including one which he proposed, for how the Shroud’s image was imprinted. We do know, however, that it was not painted, as the image rests only the very top of the linen threads and no paint materials soaked into the threads. It was discovered in the late 1800s that the Shroud has the qualities of a photographic negative, which is why a negative of it produces a clearer image. The image also has three dimensional qualities. Some current theories point toward radiation or an electric field as responsible for producing the image. See Dr. Jackson’s “Radiation Fall-Through Hypothesis, and Antonacci’s revision, on page 83.

The Shroud contains real blood (both pre- and postmortem), which has recently been shown to be from a torture victim. It is faithful to Jewish burial practices, as well as the Roman method of Crucifixion. As such, it does not match medieval imagery of the crucifixion, which portray nails in Jesus’ hands and feet, but rather in the wrist and ankles in accord with archeological evidence of Roman crucifixion.

5. It Matches Another Ancient Image of the Passion

The Shroud matches blood stains from the Sudarium of Oviedo, the head cloth used to cover Jesus after the crucifixion and in burial. There is documentation that it was brought to Spain after the Persian invasion of Syria in the seventh century. When the two cloths are compared, the blood stains match up identically.

So what about the carbon dating? Dr. Jackson offers a number of reasons why the test pointed to the Middle Ages. He notes that his research group, STURP, made recommendations to take samples from multiple locations and to clear them of contaminants. It was also suggested to avoid the area that was chosen for the carbon dating samples as it was already shown to have some inconsistencies with other locations, such as a greater presence of cotton. None of these suggestions were followed! An alternative dating method, fiber tensile-strength comparisons, conducted in 2015, pointed to 372AD, plus or minus 400 years (93).

The Shroud provides an incredible access point to learn more about our Lord’s Passion, burial, and Resurrection. It has an amazing history, made only more intriguing by new scientific methods. Dr. Jackson’s book provides a helpful, introductory summary. He and his wife (Rebecca) also speak on the Shroud across the world and the Turin Shroud Center of Colorado hosts an exhibit at St. Gabriel’s Church in Colorado Springs, including a full-size replica of the Shroud.

It is also gives us a unique glimpse at the likely appearance of Jesus. As such, it prompts our prayers: “Restore us, O God; let thy face shine, that we may be saved!” (Psalm 80:3).