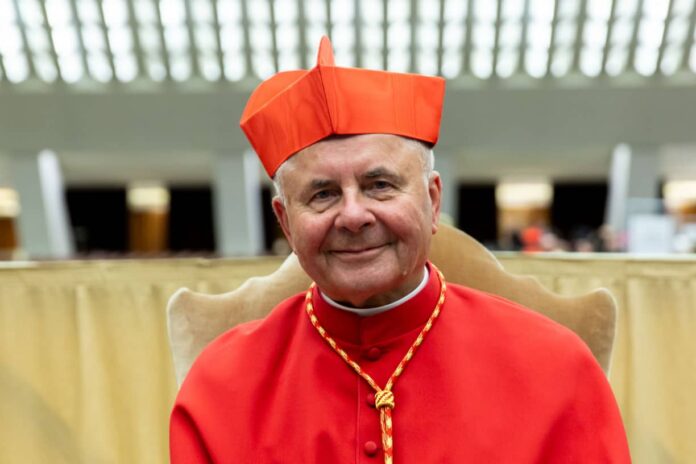 ROME. Even the greatest enthusiasts of the present pontificate might not assert that Pope Francis has an inspiring liturgical style. Like the old-school Jesuit he resembles in many ways, the Holy Father is rather flat liturgically: typically expressionless, sometimes downright dour, he gets through the business at hand in a workmanlike way. Yet at the consistory for the creation of new cardinals on October 5, Francis showed real emotion when, after bestowing the red biretta and cardinalatial ring on the emeritus archbishop of Kaunus, Lithuania, Sigitas Tamkevicius, SJ, the Pope seemed to shed a tear or two as he drew the new prince of the Church into a prolonged embrace and shared a few words with him.

I, too, was also deeply moved. And in my mind’s eye, I was taken back to 1985, to a different kind of Washington and a different kind of Congress, where men and women of good will, committed to the defense of the powerless, could work together on great causes.

In November 1984, my friend John Miller was elected to the House of Representatives from Washington State’s first congressional district. John was a Republican and the House was controlled by Democrats, so as a freshman member from the minority party, his committee assignments were not scintillating. But he had come to Congress with the firm conviction that a robust defense of human rights behind the iron curtain would hasten the nonviolent collapse of communism, so he asked me what he might do to advance that cause while laboring away on the Merchant Marine and Fisheries Committee (known on the Hill as “Fish”).

I suggested that this Jewish congressman take up a cause in which no one else was involved: the cause of persecuted Catholics in what was then the Lithuanian Soviet Socialist Republic. John immediately agreed and started looking for a Democratic cosponsor for the work. A brief study of electoral demographics disclosed a significant Lithuanian-American population on the shores of Lake Erie. So Congressman Miller rang up Congressman Edward Feighan of Cleveland, proposing that Mr. Feighan co-chair the Lithuanian Catholic Religious Freedom Caucus. Feighan agreed and asked that Miller have me talk to one of his staffers – a then-obscure Democratic operative named George Stephanopoulos. Thus was born a bipartisan effort to promote the cause of religious freedom in Soviet-occupied Lithuania: an effort that meant, among other things, trying to spring three leaders of the Lithuanian Catholic Committee for the Defense of Believers’ Rights from the Gulag prison camps – Father Alfonsas Svarinskas, Sister Nijole Sadunaite, and Father Sigitas Tamkevicius, SJ.

Our efforts in pressuring Congress and the Reagan administration to demand the release of these prisoners of conscience bore fruit, and amidst the Gorbachev thaw in the Soviet Union, all three contemporary Catholic martyr-confessors were sprung. After his release, Father Tamkevicius was brought to Washington for medical and dental treatment, after which a lunch was arranged for him at the U.S. bishops conference. I was invited and the man whom I had played a modest role in helping regain his freedom gave me a long and firm embrace before turning to several brother-Jesuits who were present (all of whom, unlike their Lithuanian colleague, were dressed as laymen). “You are Jesuits,” he said, with a twinkle in his eye; “are you also Catholics?”

Sigitas Tamkevicius’s enrollment in the College of Cardinals was a papal tribute to a brave man who exemplifies the best the Society of Jesus offers the Church and the world. It was also a de facto tribute to the fidelity and courage of hundreds of thousands of Lithuanian Catholics during the Soviet occupation of their country. Their bravery produced, among a great host of martyr-confessors, the Chronicle of the Catholic Church in Lithuania – the longest-running, uninterrupted resistance journal in the history of the Soviet Union. Month after month, the Chronicle – a precise record of the communist repression of religious belief and practice – was manually typed, copied by carbon paper, distributed throughout Lithuania, and smuggled out to the West. In 2013, while visiting one of the (literally) underground bunkers near Vilnius where the Lithuanian Catholic human rights resistance printed its materials (on a printing press that was “liberated,” one piece at a time, from a communist publishing house,) I had the sense of being in the 20th-century equivalent of a Roman catacomb.

From such experiences, hope is sustained in a wintry ecclesiastical season.