A most unfortunate Roman intervention 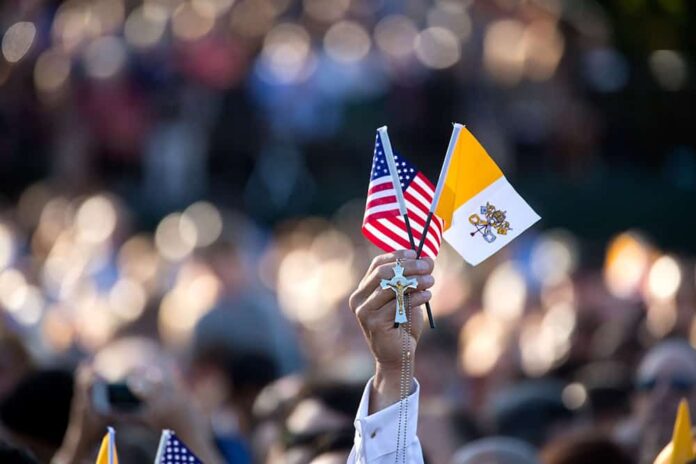 On May 7, Cardinal Luis Ladaria, SJ, prefect of the Congregation for the Doctrine of the Faith, sent a letter to Archbishop José Gomez, president of the United States Conference of Catholic Bishops. To all appearances, that letter was aimed at forestalling indefinitely a joint statement by the U.S. bishops on eucharistic coherence in the Church, with particular reference to the reception of holy communion by Catholic public officials complicit in the grave moral evil of abortion: an issue eloquently addressed recently by Bishop Thomas Paprocki of Springfield, Illinois, Bishop Thomas Olmsted of Phoenix, Archbishop Samuel Aquila of Denver, and Archbishop Salvatore Cordileone of San Francisco.

Cardinal Ladaria’s letter includes statements that are not self-evidently clear, in part because they seem inconsistent with what the congregation he heads taught in its 2002 “Doctrinal Note,” entitled The Participation of Catholics in Political Life.

For example, the cardinal’s letter to Archbishop Gomez urges that the bishops of the U.S. undertake a “dialogue” so that “they could agree as a Conference that support of pro-choice legislation is not compatible with Catholic teaching.” Why is such a dialogue necessary? At their ordination, bishops swear a solemn oath to uphold the teaching of the Church. And as the 2002 Doctrinal Note states, quoting John Paul II’s 1995 encyclical Evangelium Vitae (The Gospel of Life), “those who are directly involved in lawmaking have a ‘grave and clear obligation to oppose’ any law that attacks human life. For them, as for every Catholic, it is impossible to promote such laws or to vote for them.”

Yet the cardinal writes that the bishops should “discuss and agree” to that teaching. What is there to “discuss”? And if, God forbid, some bishops actually disagree with that teaching, why should their rejection of it – or even their muddled understanding of its implications – prevent the overwhelming majority of bishops who accept that teaching from restating it and then applying it? The First Council of Nicaea didn’t wait for the episcopal supporters of Arius to “agree” before it taught the truth about the divinity of Christ. The Council of Ephesus didn’t wait for the agreement of Nestorius and the Nestorian bishops before teaching the truth that Mary can rightly be called Theotokos, Mother of God. Unanimity can never be at the expense of truth, can it?

Once “agreement” among the bishops on what is an elementary truth of Catholic faith has been achieved, the cardinal urges that local bishops “engage in dialogue with Catholic politicians within their jurisdictions” as a “means of understanding the nature of their positions and their comprehension of Catholic teaching.” Perhaps the cardinal is unaware that this has been done. Perhaps the cardinal is unaware that the issue, typically, is not that “pro-choice” politicians misunderstand what the Church teaches but that they reject it – and still insist on presenting themselves as serious Catholics in full communion with the Church. (Such claims are now a regular feature of White House press briefings.) There is little that is unclear here, and further “dialogue” is not going to clarify much of anything.

The cardinal was also concerned that any “national policy on worthiness for communion” must express a “true consensus of the bishops on the matter.” But that is to say, once again, that the bishops with the least sense of urgency about defending the truth, applying it, and thereby recovering the eucharistic coherence of the Church call the tune for the rest of the bishops. This is not the kind of “consensus” that Pope Paul VI sought when he worked to have Vatican II adopt its Declaration on Religious Freedom by the largest margin possible. Pope Paul knew that Archbishop Marcel Lefebvre and other intransigents would never accept such a declaration, but he was not prepared to grant them veto power over it in the name of “consensus.” Why should such veto power be granted to the few intransigents in the U.S. bishops’ conference today?

The prefect’s call that “every effort …be made” to “dialogue” with “other episcopal conferences as this policy is formulated” is also puzzling. Does Cardinal Ladaria really believe that a “dialogue” with a German episcopal conference unconcerned about apostasy and careening into schism is going to produce fruitful results in the United States? If so, it would be instructive to know how that’s going to happen.

The strategy Cardinal Ladaria urges in his letter replicates key elements in the McCarrick approach to pro-abortion American politicians. I trust Cardinal Ladaria was unaware of that, but in any event the sluggish, tepid approach to a crisis that he urges on the U.S. bishops is badly misconceived.

Share
Facebook
Twitter
Linkedin
Pinterest
Email
Print
Previous articleIn the world, but not of it: Archbishop Aquila ordains six men to the priesthood
Next articleFather Herman Jayachandra remembered for his zeal and steadfast faithfulness