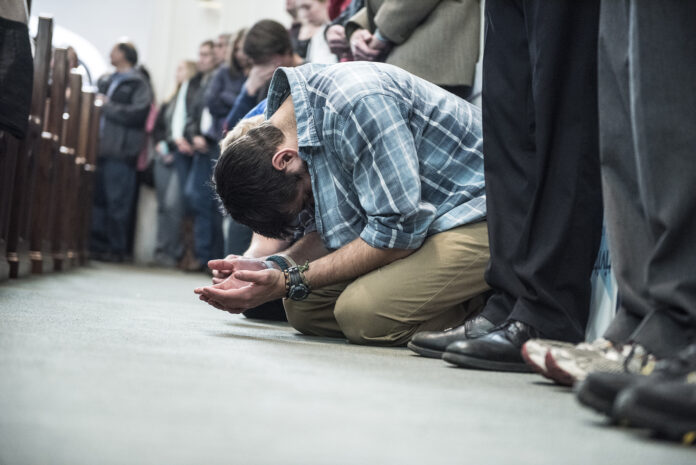 The striking thing about the story of salvation history, the desperate rescue mission of God to get his world back that we have been telling over the last three issues of the Denver Catholic, is that it did not happen in some mythical Anytime, in a mythical Anywhere, in a galaxy far away. You can go, today, to the place where a man, in the relatively recent past, who claimed to be God, is said to have risen from the dead.

His apostles were so convinced of his bodily Resurrection that almost all of them were gruesomely killed for their failure to recant that story. How easy it would have been, while you were being skinned alive, like St. Bartholomew was, to just say, “We’re kidding. It’s a joke. People don’t rise from the dead.” Instead, it would be Peter, impetuous and cowardly Peter, who would request to be crucified upside down on a hill in Rome because he felt unworthy to die the same way his crucified and resurrected Lord had.

Having traced this story of salvation history, beginning with the creation and fall of humanity, and culminating in God’s urgent rescue mission through the preparation, birth, death and resurrection of His Son, only one thing remains: you and me. How are we going to respond?

Our response really depends on a simple question: is it true?

Through the centuries, billions of people, including some of the world’s greatest thinkers and scientists, have, based on their own rational inquiry and lived experience, said they find the story we have been recounting in these issues to be utterly credible. Many of these have chosen to live in response to this story in ways that are completely countercultural to the world around them, often at great cost to themselves personally. Many more, including millions in the last century alone, have gone to their own death proclaiming this story’s truth.

If this story is a pious myth, then it does not demand even the smallest part of me. If it’s all just a nice fable, then I should not even trouble myself with Catholicism in the least.

However, if, by some incredible occurrence, this story of a God who stepped into history to rescue us from sin and death is true, then there really is only one response we can give: everything.

Not of this world

What the apostles, as well as the great saints and martyrs through the centuries intuited is that, for every baptized Christian, regardless of their state in life, the only adequate response to a God who has given everything to rescue us from sin and death is a life that is dramatically oriented to a Kingdom that is, “not of this world.” This was the driving force behind their radical availability to a grace that changed them permanently.

The story of the Gospel reveals who we are and who we are called to be. If we are open, and respond with generous hearts, the Gospel has power to change us, to bring freedom. Christ did not come just to make bad men and women good. He came to make dead people live.

Objectively, this story became our story at baptism. In that moment, all of salvation history came crashing down on our heads. What is often missing, however, is us living like that is the case.

This great story of rescue becomes lived as my story through a complete and total surrender of my life to God. If I want to live to live like the Gospel is true, I must hand my life over in such a way that it is “no longer I who live but God who lives in me.” God must truly become the architect of my life.

Too often, Catholics fall into the temptation of thinking this kind of total self-gift to God is reserved for the privileged few. Rather, the very clear teaching of the Church is that, if you are baptized, then you are called to holiness, to become a saint. Full stop.

Three Pillars of Our Response

The early Church lived in response to what they had encountered in such a way that the very foundations of the Roman Empire were shaken. To read the Acts of the Apostles is to encounter small communities of Christians that were already actively engaged in the pursuit of no less than turning the world completely upside down. Could the same be said of us today?

I would contend that this countercultural witness of ordinary Catholics is more needed today than ever. An apostolic moment precipitates a radical response to the story of the Gospel where the first proclamation we give to the world is to make our everyday lives reflect what the first apologetic defense of Catholicism called our “confessedly striking method of life” (Letter to Diognetus).

The recipe is not complicated. I want to build upon Archbishop Aquila’s column at the start of this issue and describe what I would call the three pillars on which our compelling response to the Gospel message can be built: prayer, community, and mission. These are foundational because they imitate how Jesus orients his own life and public ministry: up to the Father, inward in relationship to those around him, uniquely to his apostles, and outward, in mission to the lost.

As a dad of three kids under five, I know too well the daily struggle to carve out space in my life to give time and space for the still, small voice of God. I also know how my life loses peace and direction if I am not diligent to the invitation God extends to me daily to encounter him in personal prayer and the Sacraments.

Like marriage, prayer is not always about the fireworks: a holy hour skipped out of with a heart full of enthusiastic aspirations. It is about a habit that slowly changes our hearts over time. If we are faithful in this way, there is no limit to what God can do in our lives.

As Archbishop Aquila’s Easter resource, Encounter the Risen Jesus, has attested, this relationship with God we find in prayer grows over time into an abiding sense of our own identity as beloved sons and daughters of the Father. These quiet depths of intimacy the Lord desires for us are the foundation of a countercultural response to the Gospel.

For a rich picture of the importance and dynamics of Catholic community, especially in this apostolic moment, see Father John Nepil’s article, “Christ, the Ballast of Christian Community.”

In order to not step on Father Nepil’s thoughts, it might suffice here to say that Catholicism should make us more authentically human in such a way that it necessarily flourishes into life-giving community. Particularly, it should be noted for our apostolic moment that in times of turmoil, God has chosen to send renewal to his Church through Catholics, having encountered Christ, living a distinctly new and compelling way of life together. We see this from the earliest moments of the apostolic church in Acts, through the Benedictine monasteries, and into the mendicant communities of Sts. Francis and Clare.

As Father John Riccardo of Acts XXIX writes, “God did not crush the powers of sin and death so that only a handful of people would know about it.”

As Catholics, we should be ambitious for God and His Kingdom. It should not be something we hope someone else figures out how to do. We should be anxious that everyone in the world hear this message of the love of God. This mission should compel and drive us.

Listen to these words from St. Paul, in his first letter to the church at Corinth: “Although I am free in regard to all, I have made myself a slave to all so as to win over as many as possible… I have become all things to all, to save at least some. All this I do for the sake of the gospel, so that I too may have a share in it. Do you not know that the runners in the stadium all run in the race, but only one wins the prize? Run so as to win. Every athlete exercises discipline in every way. They do it to win a perishable crown, but we an imperishable one” (1 Cor 19-24).

The great mission God is calling us to, however, is likely more about the people around us than it is about foreign lands and founding apostolates. Mission is about charity, love of God which flows to love of neighbor. As C.S. Lewis described it, mission is not about making people projects but is about “the burden of my neighbor’s glory,” being “laid daily on my back.”

Do this exercise with me. Sit in prayer and ask God, “Who are the people you are calling me to accompany right now, that they might know you deeper?” Write down no less than three and no more than five names. Commit to praying for those three people every day and prioritize them with your time.

To conclude, here is how I invite you to begin today, right now in this very moment. If reading this series has made you want to live your faith differently, to respond to the story of the Gospel in a new way, I invite you to pray the prayer below, out loud:

God, I believe that out of your infinite love, you created me. I’m sorry for all the times I have believed the enemy’s lies that you are not a good Father and that you don’t love me. Please forgive me for all of my sins. Thank you for sending Jesus, the ambush predator, to rescue me from sin, death, hell and Satan. I choose this day to place your son, Jesus, at the center of my life.

And so, today, here and now, I surrender to you, Jesus, and desire your lordship over every area of my life. I ask you now to flood my soul with the gift of the Holy Spirit. Help me to know my true identity as a beloved son/daughter. Help me to know that I matter and that I am worth dying for. Recreate me to be the person you destined me to be. Please use me as an instrument in your merciful hands to rescue others and to help recreate this world that you so love.

Tim Glemkowski
Tim Glemkowski is the Director of Strategy in the Archbishop's Office for the Archdiocese of Denver.
RELATED ARTICLES
Catholic News Agency