A homework assignment led to 50 years of priesthood 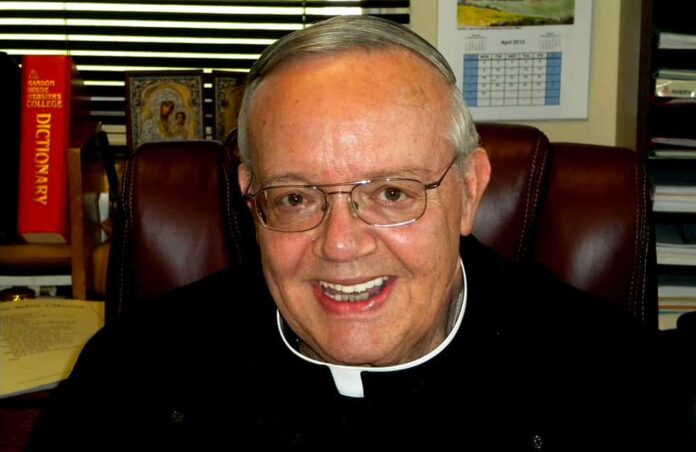 Monsignor Robert Amundsen found his vocation in an unlikely way — while working on a homework assignment in 4th grade. He was a student at Our Lady of Lourdes Catholic School in Denver and his assignment consisted in cutting out a picture of what he wanted to be when he grew up and writing a story about it.

“I wanted to be a paramedic, but I couldn’t find any pictures of doctors or paramedics,” Msgr. Amundsen recounted. “My mother told me, ‘Find a picture of something else that interests you and write a story about it.’ So, I came across a picture of a priest and said, ‘I want to be a priest.’”

Ever since, his desire was to become a priest. This year, he is celebrating his 50th anniversary of priestly ordination, and he is still taken back by the moments of joy he has experienced during his priesthood.

“What I love most about the priesthood is the fact that ordinary people allow me to enter into the most solemn, and sometimes most hidden, parts of their lives in order that I might somehow help them be healed,” he said. “Whether it’s in confession or at the point of sickness and death, the fact that I’m able to be part of the most intimate moments of people’s lives has given me some of my greatest joys.”

Msgr. Amundsen, who has served as pastor at Immaculate Conception Parish in Lafayette for 17 years, assured that community is one of the pillars that has helped him remain faithful to his calling. He has formed part of the same small community of priests as a member of the Jesus Caritas Fraternity of Priests since 1972, where he has found support and strength.

He has also found much inspiration from figures such as Father Damen McCaddon, founding priest at Our Lady of Lourdes Parish, and Saint Pope Paul VI.

“One of my first role models was Father McCaddon. Growing up he was a man who really cared about people. He really built a community at Our Lady of Lourdes and reached out to the poor… Maybe it is his example that made me decide to become a priest,” he said.

“Meeting Pope Paul VI [was also very meaningful]. I had the opportunity to speak with him and see him in action on several occasions. I really found him to be a man of deep spiritual and emotional strength.”

Looking back at his time as a priest, he believes young priests should always try to make the Eucharist the center of their priesthood and listen to the people they are to serve.

“Part of the charism of Jesus Caritas is that we have an hour of adoration every day. I think time with the Lord in the Eucharist and saying Mass are critical to what the life of the priest is all about.

“But also, the most important thing for me has been to listen to the people. When you go into a new parish as pastor, it’s important to ask people: “What’s important in your life? What do you desire out of your faith life?’

“As Pope Francis has said: if you’re going to be a shepherd, you must smell like the sheep.”