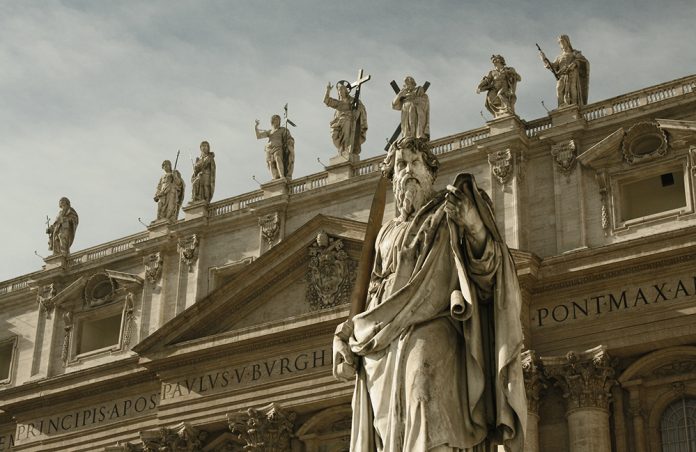 On the Solemnity of Christ the King in 2013, Pope Francis completed the work of the 2012 Synod of Bishops with the apostolic exhortation, Evangelii Gaudium (The Joy of the Gospel), issuing a ringing call for the entire Church to “embark on a new chapter of evangelization.” Catholicism, the Pope urged, must move from maintenance to mission: “from a pastoral ministry of mere conservation to a decidedly missionary pastoral ministry.” And that ministry ought to empower all the people of the Church for mission, for the 21st-century Church must understand itself as a “community of missionary disciples” who are “permanently in a state of mission,” because the Church lives not for herself, but “for the evangelization of today’s world.”

A little short of eight years later, Cardinal Mario Grech, general secretary of the Synod of Bishops, unveiled a complex — some might say, convoluted — plan for an extensive series of consultations at the diocesan, national, continental, and international levels in preparation for the Synod on “synodality” to be held in Rome in October 2023.  This two-year process has been described by one enthusiast as “the most important global Catholic project since Vatican II.” My own hunch — based on the U.S. Catholic “Call to Action” process in 1974-76 and the current German “Synodal Path” — is that the only people who will be fully engaged in Cardinal Grech’s multitudinous consultative “phases” before the 2023 Synod are people who love to go to meetings in order to share with like-minded spirits their complaints about The Way Things Are in Catholicism. The rest of the Church, or at least its living parts, will be otherwise occupied, getting about the task to which Pope Francis once summoned all of us: “the evangelization of today’s world.”

That the Church must be in mission, including a mission to poorly catechized Catholics who are drifting away from the faith in droves, ought not be in serious dispute. The pandemic has doubtless accelerated the decline of Catholic practice. But that exodus from the pews was underway before the world ever heard of Wuhan virology labs and COVID-19. The exodus reflects in part the corrosive effects of a culture that, in its kinder moments, may tolerate Catholic faith and practice as a lifestyle choice, but which is adamantly opposed to the notion that Catholicism is the bearer of enduring Gospel truths that lead to personal happiness and social solidarity. The exodus is also a by-product of decades of inept catechesis and flaccid preaching, such that in much of the western world today, the most highly educated Catholics in history likely know less about Catholicism — and therefore believe less — than their grandparents.

Anglican biblical scholar N.T. Wright, who has brilliantly defended the historicity of the Resurrection, has also written that there is no evidence whatsoever of any form of early Christianity that did not vigorously affirm that Jesus of Nazareth had been raised to a new and super-abundant form of life — a life available to all those who professed belief in him and lived as his friends and disciples. What was true two millennia ago is true today: If there is no belief in Easter, or in the resurrection to eternal life of those who have died in Christ, there is no Christianity. Period. And if, by that measure, Italy is a post-Christian society and culture, things are likely even more grim in other sectors of what was once western Christendom.

It is not self-evidently clear how two years of self-referential Catholic chatter in pre-synodal Church discussion groups, conducted under the rubric of “discernment” about a “synodal Church,” is going to chart a path beyond this abandonment of rock-bottom Christian beliefs, which is at the root of today’s rapidly declining Catholic practice. This is not the time for a Church in meetings. The times demand a Church in mission, proclaiming Jesus Christ as the answer to the question that is every human life.

Featured Photo by Nils on Unsplash

Share
Facebook
Twitter
Linkedin
Pinterest
Email
Print
Previous articleQ&A: Celebrating the past 101 years of Camp St. Malo — and looking ahead to the future
Next articleMiguel Pro Mission offers hope and a future to the people of Ciudad Juarez