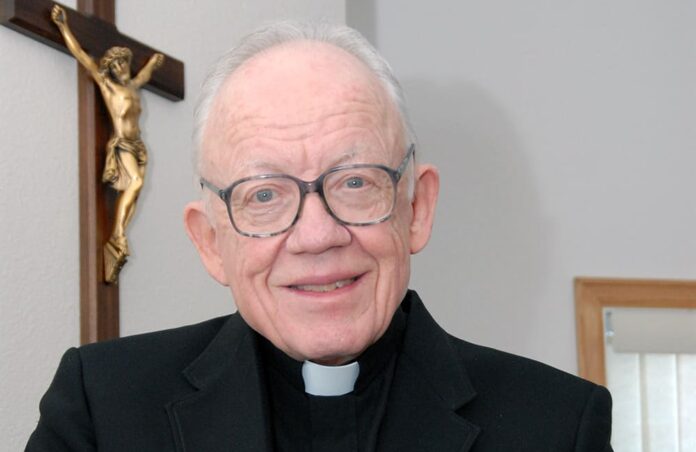 Monsignor Edward Madden, who celebrated his 65th anniversary as a priest this year, died Aug. 23 at Mullen Home. He was 91 years old.

The longtime priest of the Archdiocese of Denver was born May 2, 1926 to Edward and Mary Madden in Denver. He attended grade school at St. John the Evangelist school and graduated from Regis High School. He attended St. Thomas Seminary and the Catholic University of America, and was ordained a priest June 7, 1952 by Archbishop Urban J. Vehr.

“He’s the first priest I consistently remember,” Father Ciucci said on Monsignor Madden. “I remember him as stouthearted and faithful.”

Father Ciucci remembers Monsignor Madden suffering from back pain, but doesn’t remember him ever complaining about it.

“It was a good amount of suffering that he just patiently bore,” Father Ciucci said. “He never took himself too seriously and realized that God was always in control. He was really humble.”

Denver Catholic had spoken to Monsignor Madden just in June for the occasion of his 65th anniversary as a priest. He was a man who was grateful for his life as a priest.

“It was a good life. I never thought I’d last his long,” Monsignor Madden told Denver Catholic in May. “Whatever the Lord wants I’ll try to do what he says.”

Monsignor Madden is also remembered as a priest who held a steadfast devotion to the Mass and sought to bring the Eucharist to people. Though wheelchair-bound, he was able to concelebrate Mass each day for the residents at Mullen Home, which he said was “a wonderful support and strength.”

“The Mass has been the center of everything,” Monsignor Madden said. “The main thing is to bring the Eucharist to the people.”