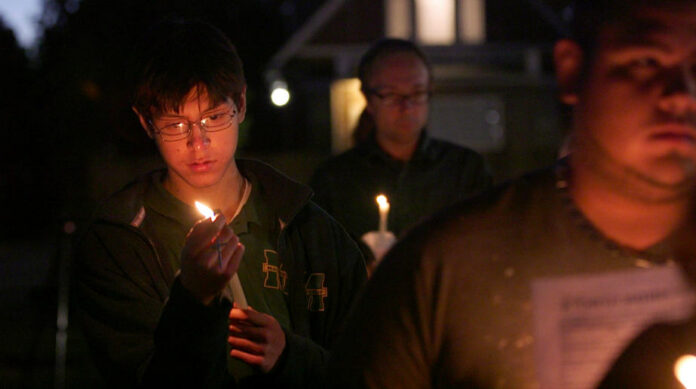 40 Days for Life is nearing its end, but that doesn’t mean advocacy for life has to.

That’s what Morgan Rosand, program coordinator to the respect life office at Catholic Charities, hopes for. The pro-life campaign recently reached its mid-way point and celebrated the occasion by holding a candlelight vigil at Lighthouse Women’s Center across the street from Planned Parenthood in Stapleton.

“It’s been really neat to see new life being involved in it,” Rosand said.

By the end of it, they’ll have also celebrated a total of 23 masses in the lot across from Planned Parenthood, a new record for them, Rosand said. Additionally, in an effort to engage the Hispanic community more, eight of those masses have been said entirely in Spanish or in English and Spanish, she said.

Roland said it can sometimes be disheartening for people when they don’t see the immediate effects of the campaign, but as “people who believe that prayer actually does change things and convert minds and hearts,” she was delighted to share that in the first 20 days of the campaign, there had been two known redirections from Planned Parenthood, and there could have been more, she said.

“That’s two that we know of, [but] you never know where the other graces and prayers could apply,” Rosand said.

For the second half of 40 Days for Life, Rosand’s hope is to keep the parishes and parish leaders energized and motivated, she said. She also hopes that parishes uses the 40 Days campaign to get excited and mobilized to come together in the biggest way: the March For Life in January.

“This is kind of the warm-up to the rest of the year,” Rosand said.

40 Days for Life still needs volunteers to cover prayer hours at Planned Parenthood for the remaining days of the campaign. Go to 40daysforlife.com/local-campaigns/denver/ to sign up.