There aren’t “two popes” in any way, shape, or form. 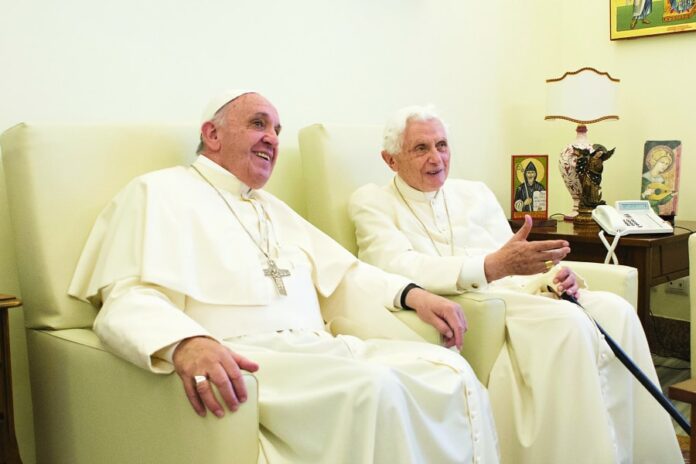 Life, even Catholic life, is full of ambiguities, but some things either are or aren’t. It’s a ball or a strike. It’s a Toyota or a Ford. You’re baptized or you aren’t.

The papacy would seem to be one of these you-are-or-you-aren’t realities.

According to the law of the Church, a man becomes pope the moment he accepts election (assuming he’s a bishop; if not, he becomes pope after he’s immediately ordained to the episcopate). A man ceases to be pope when he dies or when he abdicates the office by a clear and free manifestation of his will to do so. So there are never “two popes.” Whatever else a “pope emeritus” may be, he is
emphatically not “the pope.”

Ever since Pope Benedict XVI’s abdication, there have been voices insisting that Pope Benedict didn’t really mean to abdicate, or didn’t do so canonically, or simply laid down the burden of governance while somehow
remaining “pope,” or some other such foolishness – and this despite Benedict’s insistence that, yes, he meant to do exactly what he did. To date, these voices have been limited to the woolier fringes of Catholic commentary, where conspiracy theories abound; to academics
with too much time on their hands; and to columnists (chiefly Italian) with space to fill. A few weeks ago, however, this entirely unnecessary brouhaha was exacerbated by Benedict’s longtime secretary, Archbishop
Georg Gaenswein, now the Prefect of the Papal Household.

In a lecture in Rome, Gaenswein said (according to a report in the National Catholic Register) that Benedict
had “left the papal throne” but had not “abandoned [the] ministry” he had accepted “in April 2005,” such that, while there are not “two popes,” there is “de facto” an “expanded” [Petrine] ministry – with an active member [i.e., Pope Francis] and a “contemplative member [i.e. Pope Emeritus Benedict].” That is why, Gaenswein continued, “Benedict XVI has not given up his name or the white cassock,” and why “he has also not retired to a monastery in isolation but stays within the Vatican – as if he has taken only one step to the side to make room for his successor and a new stage in the history of the papacy.”

So, do we have one who is Simon and another who is Peter?

No, we do not. The Petrine Office is not divisible in any fashion, nor can it be a dyarchy in which one exercises the mission of governance and another exercises a mission of
prayer. The entire Church welcomes the prayers of Joseph Ratzinger, for the Body of Christ, for the world, and for Pope Francis. But these prayers do not constitute some sort of extension of the Petrine ministry Benedict XVI laid down as of 8 p.m. Central European Time on February 28, 2013.

Archbishop Gaenswein’s reference to title and vesture confirms what many of us thought three years ago: the
decisions about these matters made in 2013 were mistaken. Yes, the former bishop of a diocese is its “bishop emeritus” while he lives, for he retains the
indelible character of episcopal ordination; but there is no such character to the Petrine office. One either holds the
Office of Peter or one doesn’t. And it thoroughly muddies the waters to suggest that there is any proper analogy
between a retired diocesan bishop and a pope who has abdicated.

The former Benedict XVI ought to have reverted to being Cardinal Joseph Ratzinger, or perhaps simply “Bishop Joseph.” And with all respect to a man I esteem and who showed me many kindnesses over almost two decades, he ought not have kept even a modified form of the vesture proper to a pope.

In a world of images, the white cassock and zucchetto worn by the man who is no longer pope sends the wrong signal.

A papal abdication, no matter what the circumstances, involves renouncing the Office of Peter, not reconceptualizing it. No good end is served by suggestions that the Petrine ministry in our day has been redefined or expanded.