His Church. Our Experience.
Subscribe
HomeLocalWitnesses to freedom: Saints coming to Denver
Local 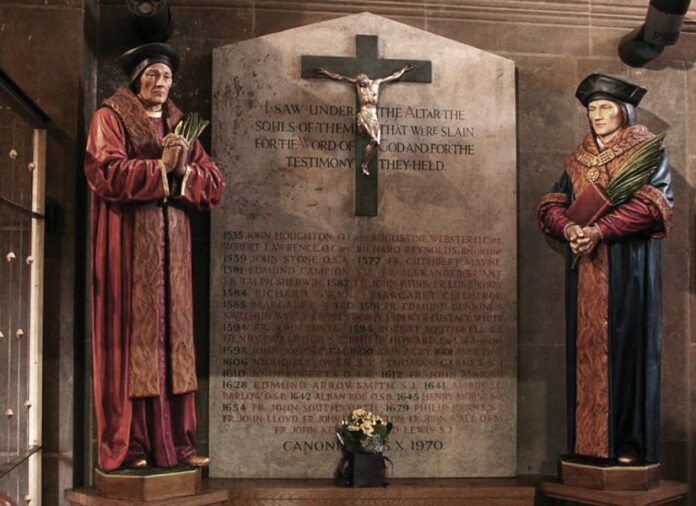 When she helped write the brief for the Little Sisters of the Poor Supreme Court Case, lawyer Hillary Byrnes and her colleagues told the court about St. Thomas More. She said this Catholic martyr might help them to understand why religious freedom needed to be respected.

Now, the United States Council of Catholic Bishops (USCCB) is sponsoring a tour of the relics of St. Thomas
More and St. John Fisher for this year’s Fortnight for Freedom. The relics will be in Denver June 29.

“We can definitely draw parallels between St. Thomas More’s life and our current situation,” she said.

Byrnes, along with Aaron Weldon and a host of others working for the USCCB, are organizing this year’s Fortnight for Freedom. For two weeks, from June 21 to July 4, dioceses across the country will arrange special events to highlight the importance of religious freedom. All the faithful are encouraged to pray for religious liberty during this time.

Weldon said that this year’s theme is “witnesses to freedom.” He said he hopes that people will look to both
current and historic persons to learn how to face modern day challenges to religious freedom.

“I hope that this gives people the opportunity to reflect upon what religious freedom is, especially by reflecting on the lives of these witnesses to freedom,” he said.

Sts. Thomas More and John Fisher lived in England under the rule of Henry VIII. When Henry VIII declared himself head of the Church of England in order to gain a divorce and marry his mistress, he demanded that his court sign an oath of supremacy, putting him above the Pope. Both More and Fisher refused. They were convicted of treason
and executed.

Some critics of the Little Sisters of the Poor claim that if the sisters would simply sign anaccommodation, the case would go away. Byrne likened this to Sts. More and Fisher and the oath of supremacy.

“People are saying that all they have to do is sign the accommodation that the government is offering, but we’re
saying that words have meaning. Our faith isn’t just about something internal; it’s an external act,” she said.

While it may seem gruesome to look at a bone fragment for inspiration, Father Edward Ruane, pastor at St. Dominic in Denver, said that it is another example of how the Catholic faith is not merely an internal disposition.

Relics have been used for ages to connect the Church throughout history. Father Ruane’s community, the Dominicans, is celebrating its 800th anniversary this year. He said that our common reverence for saints can giveus a sense of shared history with the earlier Church.

St. Dominic will host a relic June 13-15. They will have the forearm of the apostle St. Jude.

“These saints, especially the apostles, would be highly venerated in their own day. The way we know these relics are real is through the faith tradition of the Church,” he said. “We don’t don’t have DNA and such because of the day in which St. Jude lived, but have the utter care and protection of the Church for the remains of the 12 who Jesus chose.”

He said that the prominence of relics in Church history is further proof of our need for concrete expressions of
the faith.

“Physicality is important,” he said. “The Catholic Church has always seen material reality as having the possibility of conveying spiritual realities…What the relics do is draw us very close to the person through the veneration of the relic.”

Much like Byrne and Weldon, Father Ruane sees exposure to relics as a way of connecting modern Catholics to the Church’s rich history.

“Relics enable us to come to a deeper understanding of the communion of saints,” he said.

In other words, St. Thomas More, St. John Fisher and St. Jude are connected with every Catholic alive today. According to Weldon, that’s great news for modern Catholics.

“When they [Sts. More and Fisher] were faced with an impossible choice that the king put to them, they chose to follow Christ and their consciences. In that way they really show us faith in the face of trial,” he said.