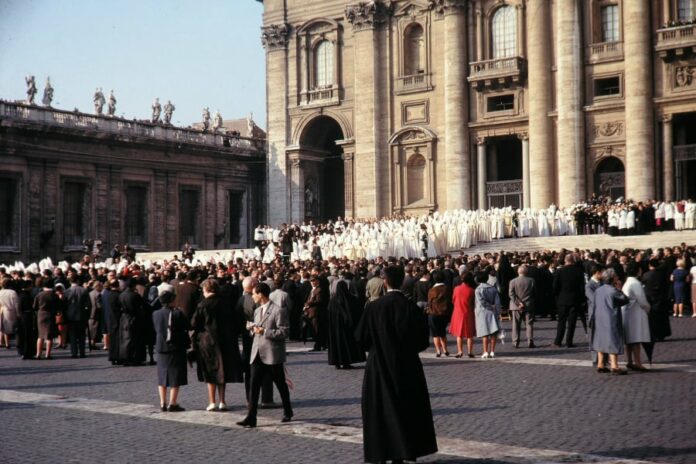 When the Second Vatican Council was putting the finishing touches on one of its key documents, the Dogmatic Constitution on the Church (Lumen Gentium), Pope Paul VI proposed that it include a statement that the pope is “accountable to the Lord alone.”

The suggestion was referred to the Council’s Theological Commission, which, perhaps to Pope Paul’s surprise, flatly rejected it: the Roman Pontiff, the Theological Commission noted, “is…bound to revelation itself, to the fundamental structure of the Church, to the sacraments, to the definitions of earlier Councils, and other obligations too numerous to mention.” The pope cannot, in other words, change the deposit of faith, of which he is the custodian, not the master. The pope can’t decide that the Church can do without bishops, or that there really are eleven sacraments, or that Arius had it right in denying the divinity of Christ.

As for those “other obligations too numerous to mention,” they include the pope’s accountability to the ways things are, which is another boundary to papal authority. Well do I remember an academic conference at which a serious philosopher (who thought himself an extremely orthodox Catholic and had, with tongue only partly in cheek, introduced himself to our ecumenical assembly by saying, “I’m the kind of Catholic it’s still OK to hate”) announced, “If the pope said that ‘2 + 2 = 5’, I’d believe him.” Another philosopher, even more distinguished, gave the proper, Catholic answer to this over-the-top ultramontanism: “If the pope said, ‘2 + 2 = 5,’ I would say, publicly, ‘Perhaps I have misunderstood His Holiness’s meaning.’ Privately, I would pray for his sanity.”

These two vignettes came to mind recently when various Catholic spin machines got into high gear, each trying to put pre-interpretations on the apostolic exhortation that Pope Francis will issue to complete the work of the Synods of 2014 and 2015.

As is his wont, Cardinal Walter Kasper was first out of the starting blocks, announcing that the apostolic exhortation (whose date of publication he got wrong) would be a first step in vindicating his proposals for a “penitential path” by which the divorced and civilly remarried could be admitted to holy communion – despite the fact that his proposal had been roundly criticized and rejected at both Synods and in various scholarly articles and books in between. The Kasper spin was then picked up by some of the usual media suspects, who called on the usual Catholic talking heads on the port side of the Barque of Peter, who took matters further by speculating that the apostolic exhortation would open up even more revolutionary paths, involving the Church’s eventual acceptance of same-sex marriage and other matters on the LGBT agenda.

This, of course, set off a counter-reaction in the conservative and traditionalist sectors of the Catholic blogosphere, where the bait was swallowed and all manner of dark speculations about what-it-would-mean-if-Cardinal-Kasper-were vindicated ensued.

What was striking about the spinmeisters in this instance was that both the progressives and the conservatives/traditionalists seem to have a false understanding of what popes can do.

By declining Paul VI’s suggestion about a papacy “accountable to the Lord alone,” Vatican II made clear that there are limits to what popes can do. On the bottom-line matters at issue in the two recent Synods, for example, no pope can change the settled teaching of the Church on the indissolubility of marriage, or on the grave danger of receiving holy communion unworthily, because these are matters of what the Council’s Theological Commission called “revelation itself:” to be specific, Mt 19:6 and 1 Cor  11:27-29. Nor has Pope Francis indicated in any public statement that he intends any deviation from what is written by revelation into the constitution of the Church.

It seems inevitable, alas, that the spin is going to continue, no matter how the pope phrases his call for the pastoral accompaniment of the divorced and civilly remarried. We may hope that the articulation is not so ambiguous that the battle of the spinners will continue ad infinitum and ad nauseam. But in all of that spilt ink, and amidst all those flashing pixels, let’s remember that there are things in the Church that don’t change, because they can’t.