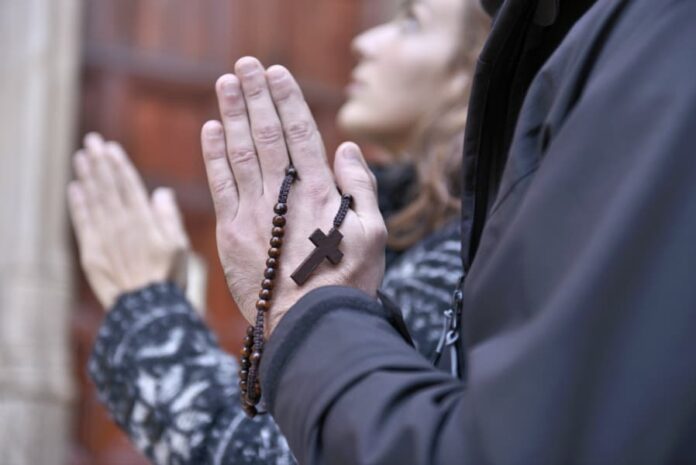 A rosary crusader and Catholic Charities are teaming up to bring rosary rallies back to Denver.

Sam Perry, a member of the board of trustees for the Catholic Foundation, is the man behind Prayer in the Square, a new initiative that aims to renew devotion to the rosary.

Perry’s grandmother inspired his love for the rosary, praying it every day. He even attributes the rosary to saving lives in his family, as he was cured of rheumatic fever and sister from polio under their grandmother’s care.

Perry became determined to spread the devotion by simply giving away rosaries. To date, he estimates he has handed out over 25,000 rosaries to parishes throughout Northern Colorado. Then he read a book about rosary rallies and was inspired to make the devotion even more public.

“I read about rosary rallies and thought we should resurrect them,” Perry said. “If they can get a million people downtown for the Bronco’s game, why shouldn’t we be able to do it?”

“The whole point of Prayer in the Square is to bring people of good will into public spaces to pray for the innocents who are being killed around the world,” Smith said.

While Prayer in the Square events have taken place around the archdiocese for months, a large one will take place at the Capitol in downtown Denver on April 2. Those present will pray a rosary and a Divine Mercy chaplet, alternating between English and Spanish.

“I’m looking forward to the sight of a bunch of people, many of them kneeling, getting people’s attention,” Perry said.

Prayer in the Square will focus on praying for all the innocents being slaughtered around the world, with a special emphasis on Christians in the Middle East and the unborn.

“We want to get as many people to pray for life as we can. We want to honor life and Mary,” Smith said.

Perry said that the Capitol made logistical sense, as it can hold many people. He said the location is also optimal because of its visibility and frequently used symbolism.

“I see all those other rallies for all these various causes, and none of them include God, or very few,” Perry said. “Our country needs the prayers. I’m hoping the participants experience something like Lourdes or Fatima—just an overwhelming sense of peace.”