His Church. Our Experience.
Subscribe
HomeLocalFrom 1,000 tears to 1,000 smiles
Local 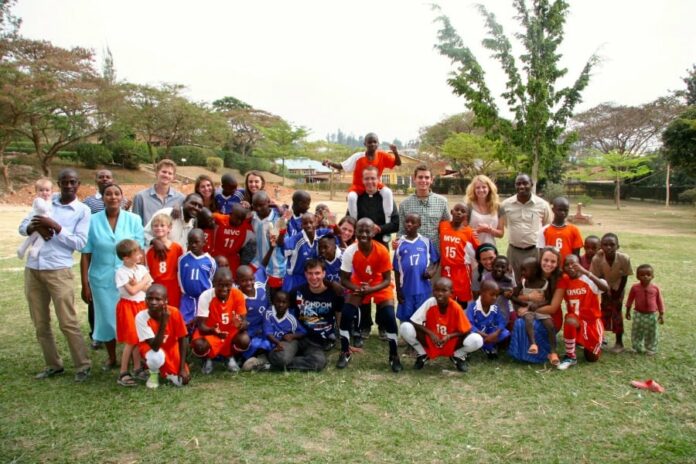 During a recent mission trip to Rwanda, Africa, Jenn Pritchard, 21, could feel the death as she stood in Nyamata Catholic Church outside the capital of Kigali.

The church had filled with people in early April 1994 as extremist members of the Hutu tribe terrorized the country slaughtering minority ethnic Tutsis and moderate Hutus. They hoped the church would be a safe haven from the death squads wandering the country armed with machetes and grenades. However, no place proved to be safe during the 90-day killing spree that ultimately took the lives of 1 million Rwandans. From April 14-19, 1994, 10,000 men, women and children were murdered in and around Nyamata Church.

“Standing in the middle of that church made it so real,” said Pritchard, a senior at Colorado State University, involved with FOCUS (Fellowship of Catholic University Students). “You could feel it … there was so much death there.”

Blood stains, bullet holes and remnants of clothing remained, serving as a memorial to the victims.

“It rocked all of us,” she said of her experience along with 17 other college students from Ram Catholic, the campus ministry of St. John XXIII Parish in Fort Collins.

Though the trip began in a place of pain and suffering, as it unfolded the group discovered that in 20 years since the genocide, many Rwandans have experienced healing and forgiveness.

“Rwanda is an international example of both forgiveness and Christ’s resurrection in the mystical body after the genocide they experienced,” said Father David Nix, 35, parochial vicar at St. John XXIII, who led the trip. “We had that experience of talking to so many who lost family members … and how many people have moved to forgiveness. It really shows that Christ is triumphant over death, not just 2,000 years ago but even in the mystical body with everything we saw.”

Outside Nyamata Church, they are now building a bigger church, he said.

“It shows how the resurrection is greater than the murders,” he said. “We experienced that so palpably in the lives of the people there.”

During the trip from June 17 to July 8, the missionaries served in Kigali with the Missionaries of Charity sisters, working with orphans and the elderly, and helping with manual labor such as building bricks and fences; and they served street children at the Rugamba Center. In Butare the next week, they cared for children and assisted with manual labor at a day care center run by the Servants of Mary of the Heart of Jesus from Brazil. On the final leg of the trip, they walked 20 miles to Kibeho, the village where the Blessed Mother appeared in 1981.

The group’s home base was the Emmanuel Community in Kigali, founded by Cyprien and Daphrose Rugamba in 1990, who also founded the Rugamba Center.

“Because (Cyprien and Daphrose) didn’t differentiate between Hutus and Tutsis, they were among the first executed in the genocide,” Father Nix explained of the couple killed April 7, 1994, the first day of the genocide, as well as six of their 10 children. “Their community has a formal petition for the couple’s cause for canonization.”

The missionaries donated 200 jerseys, 70 soccer balls, 60 pairs of shorts, 40 pairs of shoes and socks, and 20 shin guards to the children at the center, mostly boys from the streets.

“They were filled with genuine joy … it was so cool,” Pritchard said. “They’ve been through so much and they’re so joyful.”

Another joyful experience took place following the group’s first Sunday Mass June 22. After Mass, the parish of about 2,000 members began a eucharistic procession through the dirt roads of Kigali.

“This will be one of the most amazing moments of my life,” Pritchard reflected. “People dropped everything to follow Christ. Thousands. Cars couldn’t get by. People packed the streets.”

A road once impassable, covered with dead bodies, was now filled with Christians “following the Man that saved them,” she said. “Not only have they been healed, but they know why.”

Approximately 56 percent of Rwandans are Catholic.

“They gave us so much hope,” Pritchard said.

“That couldn’t be more true,” she said. “There can’t be any country that can show how love is stronger than evil than Rwanda; in the way they love and the way they praise the Lord.”